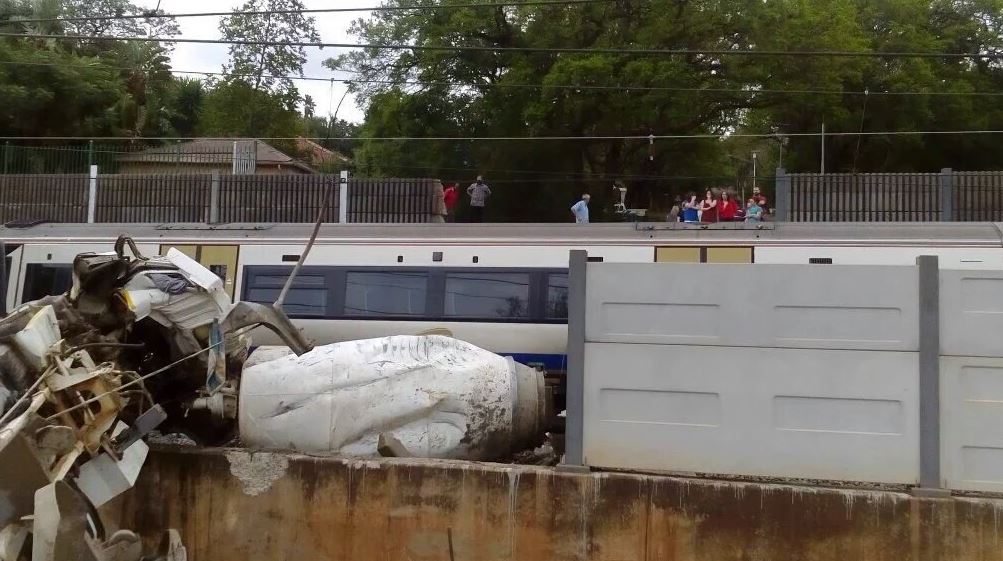 A cement truck crashed from an overhead street onto the tracks of the Gautrain.

PRETORIA - A cement truck fell from an overhead street and collided into a wall next to the Gautrain tracks in Muckleneuk, Pretoria.

The accident happened at around 9.30am on Saturday morning.

Tshwane emergency services spokesman Johan Pieterse said the driver of an automated cement truck -- one with a cement mixer attached to it -- lost control of the truck.

"The truck crashed through the barrier at the bridge at Loveday Street in Muckleneuk."

The truck went through the barrier, over the Gautrain tracks and came to a stop after crashing into a barrier.

"The driver -- who was critically injured -- was trapped," Pieterse said.

"It took us 30 minutes to get him out and he has been transported to hospital."

The Gautrain lines between Hatfield and Pretoria CBD will be closed until the scene has been cleared up.

Gautrain CEO Jack van der Merwe said buses will be provided to cater for commuters between those routes.

Accident reported on the Hatfield/Pretoria Gautrain route. The train is not operating. Buses are filling in for the train. Expect delays.

Gautrain and truck just got into an accident in Muckleneuck area. Truck fell from overhead street @ewnupdates pic.twitter.com/lRF634VRjh

Pretoria - CRASH either on, or very close to, the Gautrain tracks, via @ramilayo @TheGautrain pic.twitter.com/Y8zoY45ctH

MEC Ismail Vadi tells me there was minimal contact between Gautrain & truck, after the vehicle landed on the track. Train managed to brake.