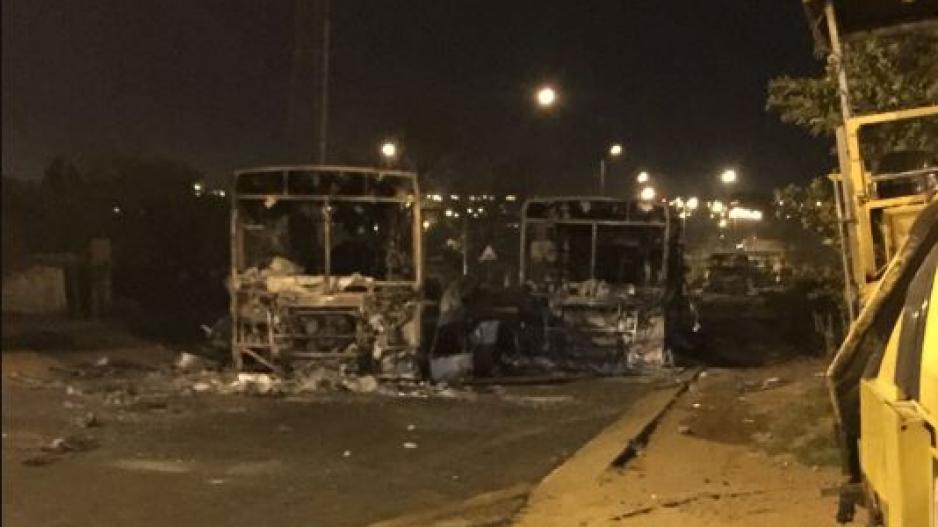 No less than 21 buses were reduced to ashes in Tshwane.

** Editor&39;s note: This is a developing story. We will bring you updates as more information becomes available.

TSHWANE - Police are battling to quell the violence in Tshwane.

The protests have now spread to Atteridgeville, Garankuwa and Hammanskraal on Tuesday where residents are blockading roads and stoning cars.

eNCA Online reporter Lenyaro Sello said streets leading in and out of Atteridgeville have been blocked with barbed wire.

There were also reports of vehicles being stoned in parts of the township.

Police were scattered across Tshwane overnight.

They were maintaining order after a full day of protests and violent demonstrations on Monday.

Roads were barricaded and vehicles torched across the metro.

It&39;s claimed that an internal ANC battle for control of the metro has spilled onto the streets.

No injuries or arrests have been reported.

In the east and the west of Tshwane, smoke filled the air and debris littered the streets as anger boiled over.

The ANC though has distanced itself from claims the violence is a result of its selection of Thoko Didiza as its preferred mayoral candidate.

Despite the ANC&39;s claims, locals are adamant.

Residents went on the rampage because neither current Tshwane Mayor Kgosientso Ramokgopa nor ANC Tshwane deputy chairperson Mapiti Matsena were selected as the metro&39;s mayoral candidate.

Police had their hands full until late in the evening trying to restore calm in Atteridgeville.

No less than 21 buses were reduced to ashes.

SAPS reinforcements were called in from as far as Alexandra, Kathlehong and Germiston.

"People they say even tomorrow [Tuesday] is going to be worse. They say there won’t be a car or taxi that will move in Atteridgeville," said local businessman Agang Mampani.

"They say people must just stay in the house."

Police have not ruled out the possibility that opportunistic criminals are exploiting residents&39; protests.

This after attempts to loot local spaza shops, and burnt vehicles were stripped for scrap.

TshwaneUnrest bus driver tells me he was stopped by a angry mob just meters away from depot. pic.twitter.com/ep1wsWmAuy