'I do not support a homophobic God' - Tutu 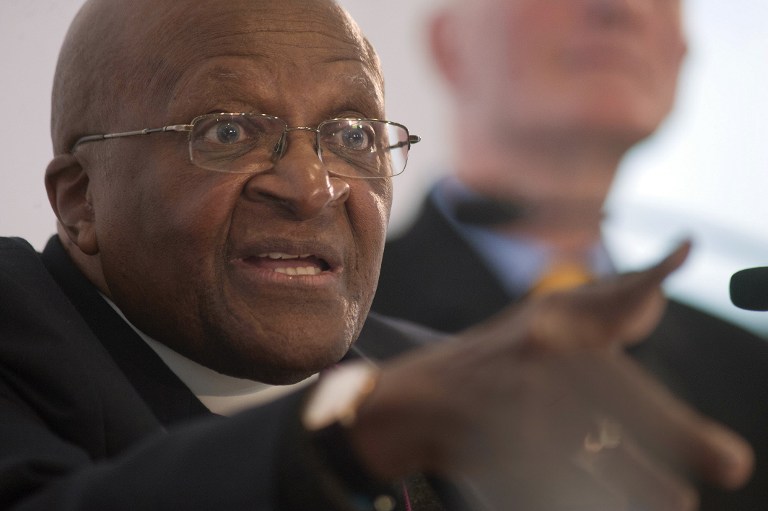 CAPE TOWN - Archbishop Emeritus Desmond Tutu told reporters on Friday that he would not support a homophobic God.

The Nobel Peace Prize winner spoke at the launch of the UN &39;Free and Equal&39; global campaign in Cape Town.

The UN campaign for lesbian, gay, bisexual, and transgender (LGBT) equality is a global initiative aimed at raising awareness of homophobic violence and discrimination.
Tutu said South Africa should cast off its discrimination against gays and lesbians.
The peace icon said many people felt they could not be comfortable in their skin due to potential ridicule.
"We have to build a society that is accepting, and it is not a free society until every single person knows they are acknowledged and accepted for who they are."

Tutu believes religious leaders have a major role to play in changing people&39;s attitude about homosexuality and gender, adding he was well aware that many religious leaders promoted the idea it was a sin to be anything but heterosexual.

"There is deep anguish for many of us that they can imagine that God would create someone and put them there and say &39;I hate you. I hate you for who I made you to be&39;."

Tutu urged the country to reject this discrimination, as it had done with racism.

"Can you imagine me having said it&39;s unjust to penalise something they cannot do anything about, their race or gender, and then to keep quiet when people are hounded, people are killed, because of their sexual orientation?" he asked.

"I think it&39;s as utterly unjust as racism ever was."

Tutu said non-heterosexuals were often described as being a "particular breed".

"They are not a peculiar breed. That is precisely what we are saying, that they are human beings. I don&39;t know why we are so surprised. They have gifts, they can become judges. They can become all sorts of wonderful things."

"I am a judge of my country&39;s highest court. I am also a homosexual man." - Edwin Cameron at UN LGBT rights campaign launch

Africa may very well be the worst place to be a homosexual man or woman.

Homophobia in sub-Sahara Africa has reached dangerous levels according to a recent report by Amnesty International.

Zambia&39;s laws have outlawed same-sex relationships since colonialism under Britain, and a sodomy conviction carries a 14-year prison sentence.

Neighbouring Uganda&39;s parliament is considering a bill that will make homosexuality punishable by death.

And in Malawi, a gay couple was jailed for 14 years in 2010 for celebrating their wedding. Then-president Bingu wa Mutharika pardoned the two men, but branded their union "satanic".

South Africa is the only African country where gay marriage is legal, but the right seems to be a preserve of the rich, as a growing trend for murders in impoverished townships emerges.  The most recent case is that of Thokoza lesbian, Duduzile Zozo.

The 26-year-old, who was openly gay, was her family&39;s breadwinner. She was brutally killed and her half-naked body found in a neighbour’s yard.

UN High Commissioner for Human Rights Navi Pillay said the campaign&39;s success would be measured by how many countries chose to decriminalise LGBT preferences and the measures they put in place to offer protection to individuals.

"Government holds the primary responsibility for protecting people. It&39;s government who can take action... but nothing happens unless there is a push from civil society," she said.

Navi Pillay concludes that "people are paying for their love with their lives."