IN PICS: Twenty years since the signing of the Constitution 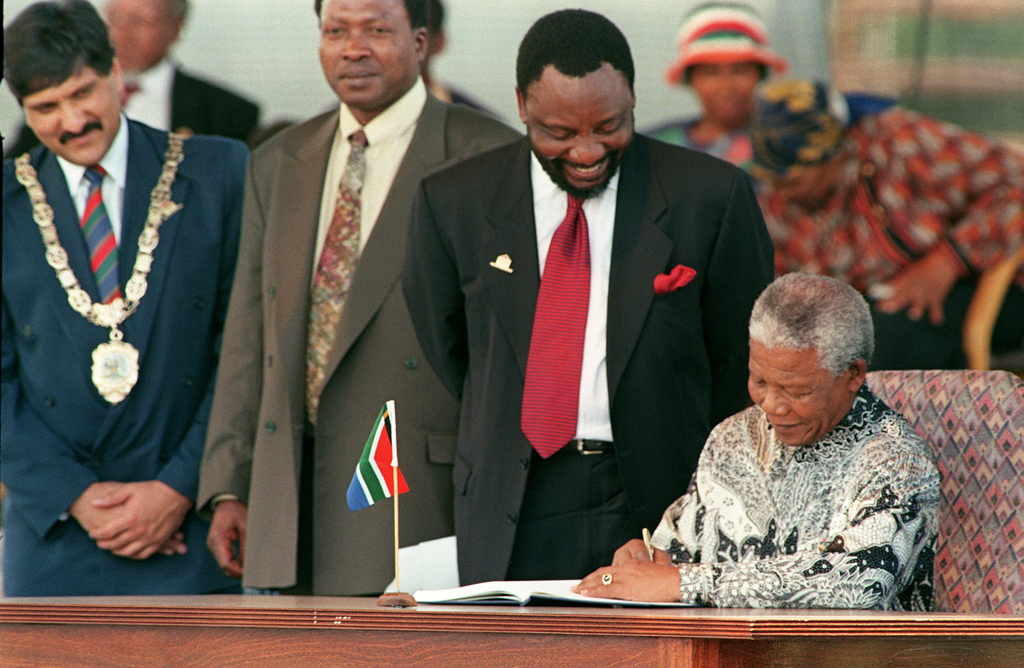 The apartheid era was marked by violence and bloodshed. Some leaders would make compromises to avoid civil war.

The roadmap to democratic order, and at its foundation, the Constitution, called for commitment to a peaceful transition, from both the National Party government and the newly-unbanned liberation organisations.

But violence almost derailed the process to end apartheid.

While talks between the Nationalists and several political groups were under way, the Boipatong massacre nearly halted progress towards a settlement.

The apartheid government itself seemed unwilling or unable to police the violence.

Rivalry between the ANC and the Inkatha Freedom Party resulted in many deaths around the country.

The ANC claimed a third force was involved. Nelson Mandela himself went as far as to suggest the police force was ‘directly or indirectly’ involved.

Then the ANC pulled out of the negotiations. It seemed that efforts for peaceful change were failing.

There was also a perception that then President FW de Klerk was stalling, so as to soothe white people’s anxieties about black aspirations for freedom.

The liberation movements were insisting on universal adult franchise: one person, one vote. This would end apartheid, they said.

The conflicts of late 1992 were eventually resolved, but then, in April 1993, MK soldier and SA Communist Party leader Chris Hani was shot and killed outside his home.

As the country teetered on the edge of civil war, Nelson Mandela appeared on television. His call for calm was heeded.

However, a few weeks later, in June 1993, right wingers stormed the negotiating centre at Kempton Park. Many viewed this as the last kick of a dying horse.

Just weeks before the 27 April 1994 elections, instability and violence were still threatening to derail the peaceful transition to a post-apartheid order.

But millions of ordinary South Africans made a different choice. The new, democratic government was just the beginning.

The old laws had to be scrapped, and a new order created.

Within two years, the Constitution of the Republic of South Africa became the supreme law of the land.

PICTURED: A crowd greets President Nelson Mandela as he emerges from Parliament in Cape Town 08 May 1996 after the Constitutional Assembly voted by an overwhelming majority to adopt the country's first basic law to be drafted by a multi-racial parliament. CREDIT: ANNA ZIEMINSKI / AFP

Today, it continues to be the document against which all other laws are measured. No individual, group, or activities in South Africa are exempt from its principles.

PICTURED: A South African MP holds up a copy of the constitution during a no-confidence debate against President Jacob Zuma in Cape Town on November 10, 2016. CREDIT: RODGER BOSCH / AFP

South Africa has come a long way, but the Constitution is more than just a document. It is the spirit which inspires and animates the work which all South Africans and their elected officials are compelled to do -  to build a country based on respect for human rights, and to undo the inequality and violations inherited from the past.

Much has been achieved because of the Constitution in the past twenty years, yet much still remains to be done.