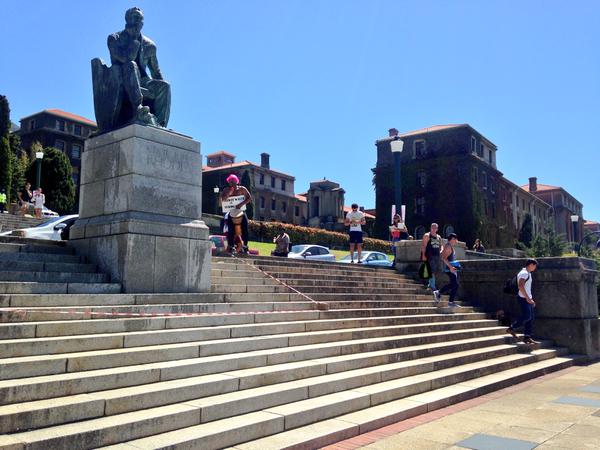 A statue at the University of Cape Town (UCT) was poured with sewage during a protest on March 9, 2015.

CAPE TOWN – A group of students poured sewage over the statue of Cecil Rhodes at the University of Cape Town during a protest on Monday.

UCT communication and media liaison manager, Patricia Lucas, confirmed the incident, adding that the statue has not been damaged and no injuries were reported.

Lucas said the university is investigating the matter and hopes to establish the identity of the protest organiser.

“The university has procedures in place to allow students to hold peaceful and safe protests on issues that concern them.

“The protesters did not follow such procedures, and by dumping excrement in a public place they violated the law. They did not inform UCT of their intention to demonstrate nor did they issue a statement to the university about the reasons for this protest,” said Lucas in a statement issued on Monday.

The group, which is claiming to represent black South Africans, said they are trying to create debate and awareness on how black people are treated at the university.

They also want universities around the country to disassociate themselves from Rhodes, who they say oppressed black people across the continent.

One of the protesting students is Chumani Maxwele, who in 2010 was arrested near the university for allegedly showing the middle finger at a convoy transporting President Jacob Zuma.

“It’s going to continue across the country."

"We are hoping to take this protest to Grahamstown because there is a statue in Rhodes University."

"When there is an art fair we want to take this protest there,” said Maxwele.

Lucas said legal steps will be taken once the identity of the protest organiser has been established.

“Vandalism of UCT property, and violating health laws, is illegal and an insult to our students and staff as well as to the wider community that participates in events on campus. We do not condone such behavior,” she said.

At @UCT_news where a protestor is throwing sewerage on the Cecil John Rhodes statue. pic.twitter.com/oITPcdLzzU

Ses&39;khona tendencies have manifested at UCT as a student throws faeces all over a statue of Cecil John Rhodes