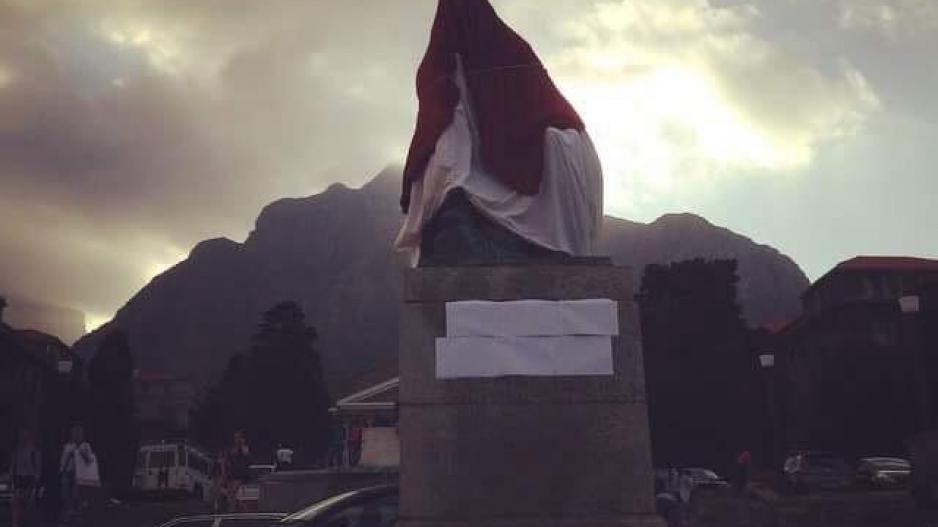 A statue of former colonialist Cecil John Rhodes was covered with red and white sheets after a mass meeting of University of Cape Town students demanding it be taken down on 12 March 2015. It is not known who covered the statue with the sheets.

JOHANNESBURG - Thousands of students at the University of Cape Town staged a mass meeting demanding that a statue of former colonialist Cecil John Rhodes be removed on Thursday.

This follows an incident on Monday when a student defaced the statue with feaces.

In a statement, the SRC said that it supported students&39; calls for faster trasformation at the tertiary institution.

Read the SRC&39;s full statement at the bottom of the article.

The crowd of students gathered at around 12:30pm this afternoon.

Mahapa said the majority of students believe the statue of Cecil John Rhodes needs to be taken down.

"The outcome of the meeting was that students would like management to formulate a stance on whether or not the statue will be taken down. If not, the matter will be taken to council."

"We also want feedback on what they will do about transformation as a whole at the institution," Mahapa said.

The meeting is reported to have dispersed peacefully by 2:00pm.

After the meeting, unknown persons came back and covered the statue with white and red sheets.

Representatives of the University of Cape Town&39;s management were unavailable for comment.

The powers that be at Rhodes University watching UCT students demand that the statue of Cecil John Rhodes be removed pic.twitter.com/QR8k0k3gQX