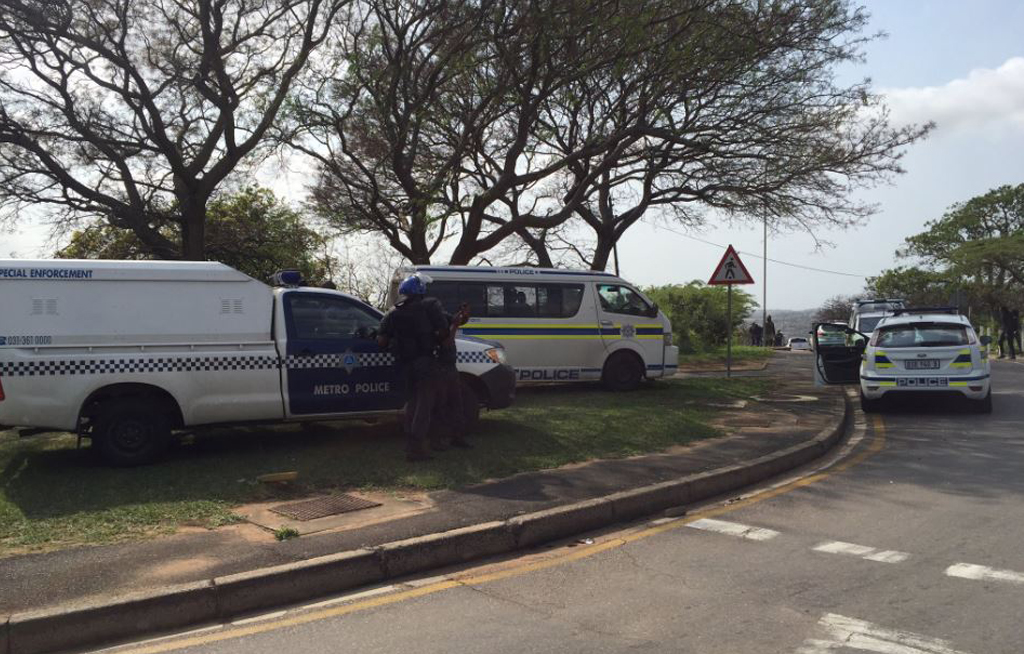 6 September 2016 - Police on standby outside the University of KwaZulu-Natal. They say they're investigating a case of arson after the law library at Howard College was set alight.

PIETERMARITZBURG - There is no truth to reports a student was raped during a fees protest at the University of KwaZulu-Natal yesterday.

That&39;s the official word from the university.

"That is totally not true, we know for a fact," UKZN Spokesperson, Lesiba Seshoka told eNCA.

"There has been a reported case of sexual assault which took place off campus. The person that has, claims that it’s one of our students, and as such we are an interested party.

"We are following up on the case to check exactly what transpired," Seshoka added.

The SA government on Wednesday said it had noted “with concern media reports on the resurgence of violent protests in some institutions of higher learning”.

A statement issued by Government Communications (GCIS) said: “Students are advised not to participate in activities that may place them in conflict with the law as they protest against fee increase at universities”.

The statement was issued amid violent protests at the University of KwaZulu-Natal’s Howard College, Pietermaritzburg and Westville campuses.

Police spokesman Lieutenant Colonel Thulane Zwane said 23 students were arrested on Tuesday, at both campuses for public violence and violating the court order that the university had obtained earlier this week, prohibiting protests.

READ: Students arrested as police remain on standby at UKZN

Reacting to the protests on Wednesday the GCIS said: “As government we would like to assure South Africans that the matter of student fees is receiving our full attention. We are working together with all parties concerned to find a lasting solution”.

The GCIS said the destruction of property and violence during this process cannot be tolerated.

“Government calls on students to allow the ongoing consultation to be concluded peacefully,” said the GCIS in the statement issued by Donald Liphoko, the GCIS acting Director-General.

“We call on student leadership to join the call for the protection of valuable university infrastructure which is part of the common national heritage of all South Africans,” said Liphoko.

“Government understands the difficult circumstances faced by many students in the country and is doing everything in its power to resolve the situation.”

PICTURED: Police are ihnvestigating a case of arson at the law library of UKZN&39;s Howard College. CREDIT: eNCA / Dasen Thathiah

Damage caused by violent protests on Monday and Tuesday runs into millions of rands.

Six vehicles were torched at the Westville campus on Monday night, and on Tuesday evening, the law library in the university’s 85-year-old Howard College building was set alight, despite campus being relatively deserted by then.

“There are things that cannot be recovered overnight, because they require a lot of money. And when students don’t want to pay their fees but they burn property such as buildings, then the only conclusion you can reach is that they are ready to study under trees," Seshoka told eNCA.

No further incidents were reported overnight, and the situation remained calm on Wednesday morning. However, police remain on standby in the area.

There have been other allegations, with students accusing police of being heavy handed and using live ammunition. Police insist they are only using rubber bullets.

Management is currently holding talks with both the Department of Higher Education and student representatives.

“University management today suspended the academic programme until further notice. The decision was taken to provide all parties with the space to engage and try and resolve the current impasse. We apologise for any inconvenience caused. Every effort is being made to ensure the continuation of the academic programme,” the university announced on Tuesday.

The possibility of a fee increase is among students&39; long list of grievances. Inadequate accommodation, and complaints about poor security at campuses also made the list.

Officials hope to reach a settlement in order for learning to continue.

The GCIS said the 2016 academic year was drawing to a close and students were encouraged to focus on preparations for their final examinations.

“South Africa desperately needs the skills of young people who will be able to one day take their place in the South African economy and contribute towards a great destiny,” said Liphoko.

“Education is our future. The Department of Higher Education and Training will soon make an announcement on the matter of student fees.”- Additional reporting: African News Agency.

* University spokesperson, Lesiba Seshoka spoke to eNCA - listen to the interview in the gallery above.