Uranium mine plans an environmental risk to water-scarce Karoo 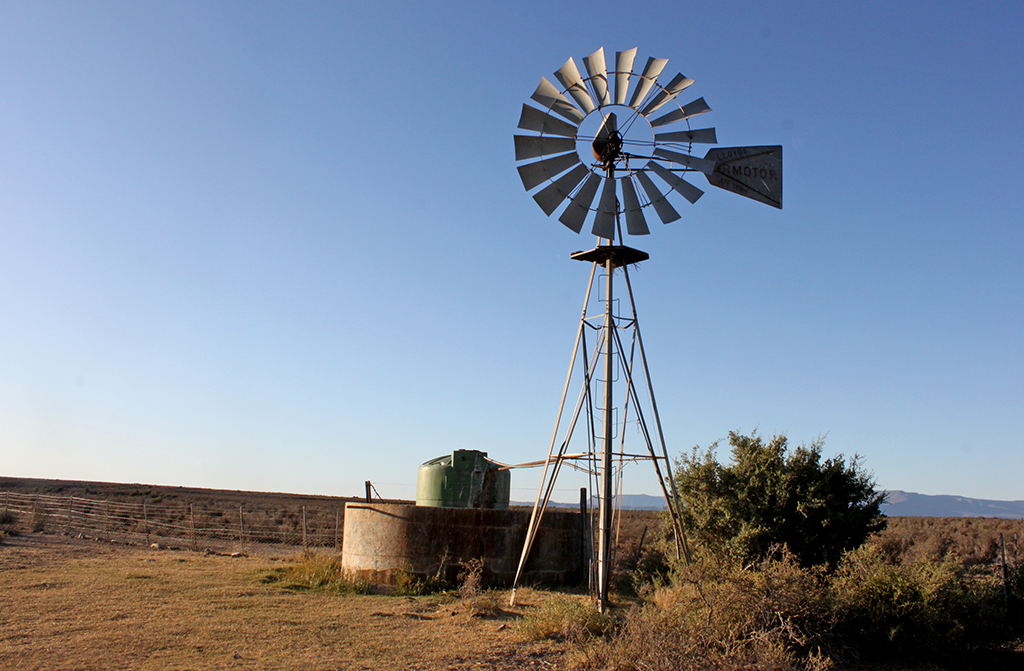 A windmill and borehole on the Olive Grove guest farm near Beaufort West. This technology is what farmers use to provide water for game and livestock in the Karoo.

BEAUFORT WEST – South Africa is a water scarce country and nowhere is this more evident than in the wide-open arid landscape of the Karoo.

Beaufort West has a typical desert climate, with virtually no rainfall during the year making groundwater the main source of water for the town.

PHOTO: The town of Beaufort West in the central Karoo is set to become a mining hub if plans for a uranium mine are approved. Credit: eNCA / Bianca Ackroyd.

This resource is stored in a complex system of aquifers - a body of permeable rock, which contains and transmits groundwater.

Residents are concerned that this important source of water could be at risk because of large-scale uranium mine planned for the area.

The mine will use 700-million litres of water annually, although its planned that most of this water will be recycled during the mining process.

Australian company Peninsula Energy through local subsidiaries Tasman Pacific Minerals Limited and Lukisa JV Company has acquired land and exploration licenses for the mine which is expected to take up more than 7,000 square kilometres of land.

The project will be known as Tasman RSA mines.

Click here to read more about the group behind the operation.

Plans for the mine, alongside proposals for shale gas development (fracking) for the area, have been welcomed by local government officials who say it will bring much needed jobs to the area.

But one expert warns that if the water is contaminated the effects on the ecosystem will be devastating..

“Water is such a scarce resource in South Africa, particularly in the Karoo, and so to contaminate the water source here is really hitting to the heart of what drives the entire system,” said SANParks Ecologist, Dr Angela Gaylard.

PHOTO: A female kudu feeds on a bush in the Karoo National Park in Beaufort West. Credit: eNCA / Bianca Ackroyd.

One of the parks that Gaylard monitors, is the Karoo National Park in Beaufort West.

The park, which received more than 30,000 visitors last year, is home to a diverse range of species and employs more than 50 people.

Watch this video to learn more about the significance of the ecosystem preserved by the Karoo National Park:

The first phase of mining will take place in the Eastern Block, as highlighted in the map below, over 17 years.

According to the report, the risk of groundwater contamination is high.

“It is possible that accumulated or accidental contamination of wetland/pan systems may occur through sub surface or surface flow of potentially radioactive material.

“Radioactive dust or waste product may, through normal hydrological processes, flow or seep into highly sensitive pans or wetlands downstream of infrastructure such as the crushing yards or indeed the pits themselves.

“The use of water may be required for extraction of the product, further exacerbating the significance of the impact,” the document states.

A processing plant will be established for the Ryst Kuil channel, which will convert the uranium ore into uranium oxide.

PHOTO: Rusted barrels which had radioactive waste are left behind by Esso Minerals Ltd. during trial uranium mining at the Cameron shaft about 40km from Beaufort West. Credit: eNCA / Bianca Ackroyd.

The uranium oxide or “yellow cake” as it is also know will then be transported to Cape Town via train and shipped to utilities abroad for beneficiation and enrichment, before being made into fuel rods for nuclear reactors.

Ryst Kuil is about 40km from Beaufort West and is the site where Esso Minerals Ltd first conducted trial uranium mining in the 1970s.

The area has now been fenced off for the Tasman RSA mines operation and is no longer a hazard.

Click here to watch a video of the old Cameron mine shaft.

At the Ryst Kuil site, a tailings dam and a storage dam will need to be built.

The EIA/EMP states these mining activities might cause radioactive contamination:

There are plants to reduce the risk of contamination.

These include soil management, real-time monitoring probes and a tailing dam facility.

A water use license from the Department of Water and Sanitation will also need to be acquired.

Executive Mayor of the Central Karoo District Municipality Edward Njadu is confident that the mining processes will be safe.

Watch a clip of the interview with the Executive Mayor:

Aside from the risks of contamination, some residents are worried that there won’t be sufficient water for the mine, fracking and farming, as well as for domestic use in the town.

This issue was raised at recent public participation meetings held in Beaufort West and Prince Albert.

Click here to watch a video of a demonstration against the mine plans at the meeting.

Is there enough water to mine?

Local resident Ulrich Steenkamp, is not hopeful about the future of the town.

PHOTO: Representatives of the Indigenous people of Southern Africa father and son Billy (left) and Ulrich (right) Steenkamp walk down a koppie on the outskirts of Beaufort West.The father and son are opposing plans for a new uranium mine in the area. Credit: eNCA / Bianca Ackroyd.

“The farmers use ground water and this is the only stable source of water for the Karoo, which they want to interfere with with their mine processes and materials that will pollute the water,” he said.

Just 26 years old, Steenkamp is an outspoken representative of the Indigenous People of Southern Africa.

Watch a clip from an interview with Ulrich Steenkamp:

He says they have been marginalised for too long.

“Throughout history our people were forced to forget about their culture and heritage. Now I’m becoming a cultural artifact,” he said.

“How can they destroy the nature, tourism and farming economies for just one economy?”

Ronald Samuels owns the Olive Grove, an olive and ecotourism guest farm on Lombaardskraal, which is on land allocated for the first phase of mining.

Most of South Africa’s olive industry is currently based in the Western Cape, and according to the SA Olive Industry Association only a third of all olive oil consumed in South Africa is produced locally.

Demand for olives is high.

“This has been for me a 15-year journey of absolute commitment in terms of every fund I’ve had - I’ve bought and sold four farms to get here,” he said.

While olive trees are drought-resistant and use less water than other fruit trees, they still rely on regular watering.

“I’m totally helpless; these guys - the government - have got rights over my minerals,” said Samuels.

PHOTO: An empty dam on the Olive grove guest farm near Beaufort West. This dam has been dry since August 2015 due to the extreme drought currently occurring in SA. Credit: eNCA / Bianca Ackroyd.

Understanding groundwater in the Karoo basin

Independent hydrogeologist Peter Rosewarne said there is potentially enough groundwater for mining and the people of the Karoo, depending on specific site characteristics, and the mine water demand.

“These are mainly in areas that are relatively inaccessible or uneconomical to get it [water] to, like Beaufort West, because of the distance,” said Rosewarne.

He said not all the groundwater in the Karoo is unsuitable for human consumption.

“Some of it is very saline or has high fluoride and/or nitrate, which could be used in a mine for process water and for fracking, but is unsuitable for irrigation or human use, without expensive treatment,” he said.

Rosewarne was one of the members of the Karoo Groundwater Expert Group, which was established by Shell in October 2011.

The group set out to independently evaluate available information on groundwater in the Karoo and assess potential risks to the shallow aquifer system caused by fracking.

Even though uranium mineralisation exists in the Beaufort West area and other large parts of the Karoo, it’s not necessarily present in large enough concentrations of the groundwater itself, to cause concern.

Rosewarne conducted water assessments in the Ryst Kuil channel in 2007 when studies were done for Uramin/Areva who owned the exploration rights before Peninsula Energy bought them from the French company.

“We took samples of groundwater from the actual uranium ore body, which is hosted in a sandstone aquifer, and you could drink the water,” he said.

Rosewarne said there isn’t necessarily going to be widespread contamination but there are legitimate concerns that local aquifers could be polluted.

But for farmers up to 100 kilometres downstream, such concerns are probably unfounded, because groundwater moves slowly through rock formations underground, decreasing contamination.

He said the impact in years to come, post-mining, would need to be looked at in more detail to assess such impacts and address people’s legitimate fears.