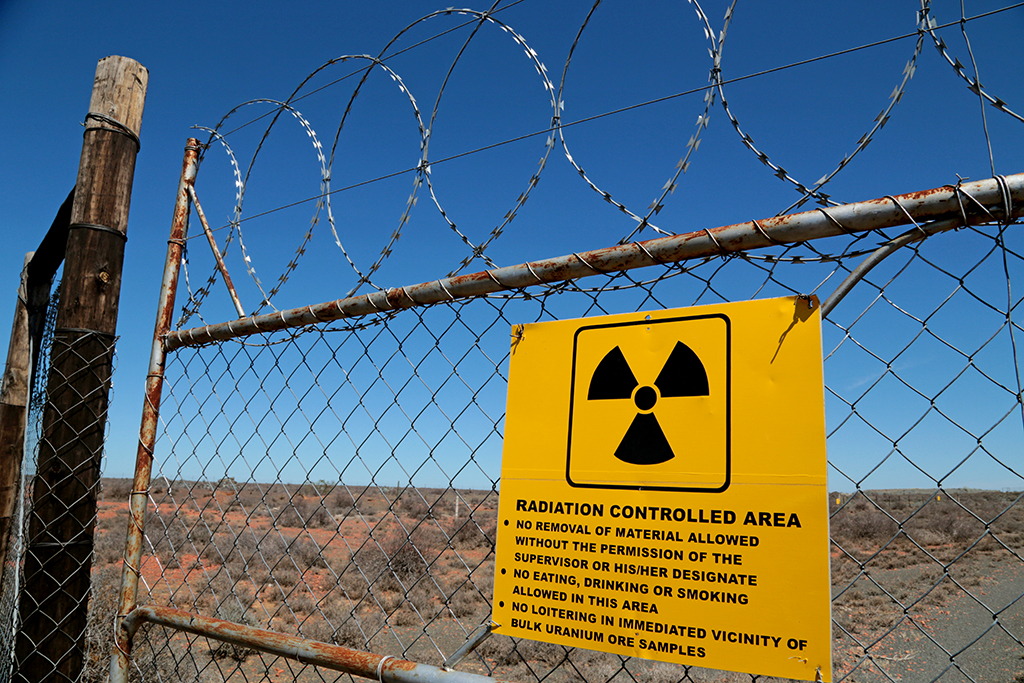 The entrance to the Cameron shaft, an old uranium trial mine 40km from Beaufort West. The old shaft has been fenced off by Tasman RSA mines, who plan to use the property for a new uranium mine.

This story is part of an interactive web documentary.

That’s what residents of the central Karoo could face in the next five to thirty years, should plans for large-scale uranium mining go ahead.

The central Karoo district municipality spans 38,000 square kilometres and is home to more than 71,000 people.

Click here to read more about the group behind the new mining plans.

Residents have until 15 March 2016 to comment on the proposal covering land in the Eastern, Northern and Western Cape provinces.

These comments will form part of the group’s mining rights application, which will be submitted to the Department of Mineral Resources for review.

The mine is expected to operate over thirty years, split into two phases: open pit and underground mining.

In South Africa, uranium is more available than gold and is produced as a by-product of gold mining in the Witwatersrand Basin. The Tasman RSA mines operation would be the first uranium ore mine in the country.

Uranium oxide is a key component of the nuclear energy process. According to the World Nuclear Association, the “uranium ore requires first for the uranium to be extracted from the rock in which it is found, then enriched in the uranium-235 isotope, before being made into pellets that are loaded into assemblies of nuclear fuel rods.”

For Peninsula Energy’s Karoo Projects, as they are known, a central processing plant will be set up at the Ryst Kuil site, just 40 kilometres from Beaufort West.

The group has already purchased a large amount of land where the first phase of mining will take place. This will include a processing plant and a tailings dam.

Uranium was first discovered in this area in the 1960s. Click here to watch a video.

The uranium ore will be crushed and converted into uranium oxide, also known as “yellow cake” on site. The yellow cake will then be transported by rail from Beaufort West to Cape Town before being exported to utilities in Western Europe and the USA.

It will then be made into the uranium-enriched fuel rods, needed to generate nuclear power at reactors around the world.

Click here to read 10 things you didn’t know about uranium.

In 2015 the Department of Energy signed inter-governmental framework agreements with South Korea, Russia, China and France.

At the State of the Nation Address in February President Jacob Zuma said nuclear energy was still an integral part of the country’s energy mix.

“Our plan is to introduce 9,600 megawatts of nuclear energy in the next decade in addition to running Koeberg nuclear power plant.”

The uranium needed for South Africa’s new nuclear power plants could come from South Africa if a beneficiation utility was available locally.

CEO of Peninsula Energy, Gus Simpson, says the plan for the Tasman RSA mines is not dependent on the country’s plans for nuclear procurement.

Watch a clip from the interview with Peninsula Energy CEO Gus Simpson below:

The uranium ore from the Karoo could supply the country’s planned reactors if South Africa opens a uranium beneficiation operation.

During the Apartheid-era the Valindaba facility was able to convert uranium for nuclear weapons but South Africa voluntarily dismantled its nuclear weapons in 1991, along with other countries.

The Nuclear Energy Corporation of South Africa (Necsa) already has a business plan to set up a conversion and fuel fabrication plant.

Necsa CEO Phumzile Tselane says it could take three to five years to set up.

“In my view, uranium is South Africa’s new gold.”

Watch a clip from an interview with Necsa CEO Phumzile Tshelane below:

Whether or not South Africa forges ahead with its nuclear build programme, the plans to mine uranium will continue.

With 30% of people in Beaufort West dependent on social grants, the mine projects will bring much-needed employment to the area said Edward Njadu, Executive Mayor of the Central Karoo District Municipality.

Watch a clip from the interview with Executive Mayor Edward Njadu:

According to the mine’s plans, approximately 1,000 jobs will be created in the three-year construction phase. A further two hundred and fifty people will be employed over the next seventeen years.

“From a labour perspective we look forward to developing the Karoo Projects because it will provide the residents of Beaufort West with a lot of opportunities for employment, and good careers with us,” said Simpson.

But, will the job creation opportunities be worth the risk?

The Environmental Impact Assessment Report and Environmental Management Programme document submitted to the Department of Mineral Resources on 25 January this year states that the risk of uranium contamination is high.

PHOTO: A map showing the Eastern block where uranium mining could begin if an application for mining rights is approved by the Department of Mineral Resources. Credit: Tasman RSA mines.

It states that accidental contamination of water systems with potentially radioactive material is possible.

Plans to reduce the impact of the spread of dust and regular monitoring of catchment areas are included in the document.

Billy Steenkamp, co-founder of the Indigenous People’s Association for Community Economic Development of South Africa (Ipaced SA) says the fact that the Karoo is already a water scarce area is a huge concern.

PHOTO: Representatives of the Indigenous people of Southern Africa father and son Billy (left) and Ulrich (right) Steenkamp walk down a koppie on the outskirts of Beaufort West.The father and son are opposing plans for a new uranium mine in the area. Credit: eNCA/Bianca Ackroyd.

“Look at our dams; they’re empty. There’s no water here – these people are lying to us,” said Steenkamp.

“It’s important that our land stays protected as is, for future generations that will come after us,” he said.

PHOTO: This sign marks the start of the fossil trail at the Karoo National Park in Beaufort West. The central Karoo is the location where many fossils from the triassic period have been discovered. Credit: eNCA/Bianca Ackroyd.

The nearby Karoo National Park employs more than 50 people and received more than 30,000 visitors in 2015. It’s home to a number of diverse plant, mammal and bird species.

Clean water is a vital resource needed to ensure the survival of the ecosystem, which is a service to the farmers and people that live in the Karoo said Dr Angela Gaylard, regional ecologist for the frontier cluster of SANParks.

Click here to read more about the water risk.

At a public participation meeting in Beaufort West on 22 February, residents were conflicted over the proposed mine, with some saying they wanted jobs while others protested about the environmental threat.