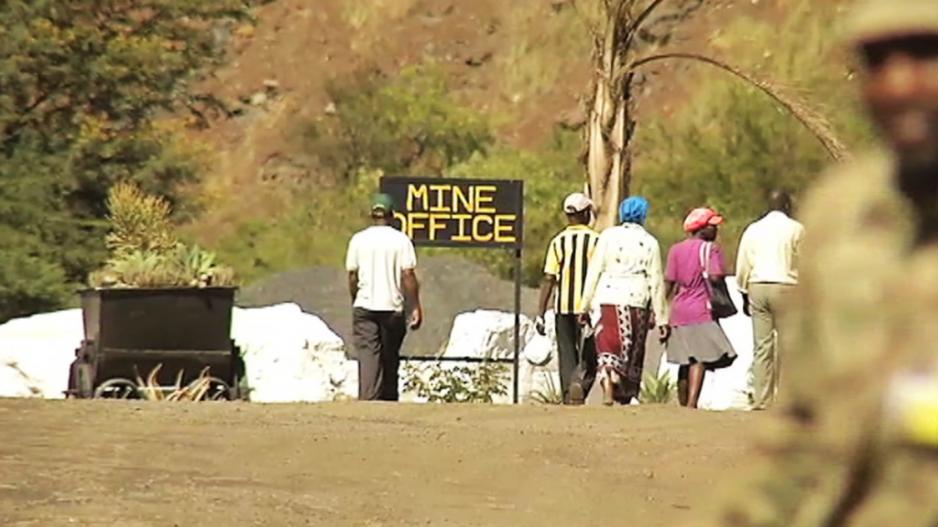 Mpumalanga, 11 February 2016 - More than 24-hours have passed since the last signs of life were picked up by rescuers, trying to reach three workers trapped underground at Lily Mine.

BARBERTON – Vantage Goldfields has offered R200,000 for each of the three miners still trapped at its Lily Mine at Barberton in Mpumalanga, Mineral Resources Minister Mosebenzi Zwane said on Saturday.

Zwane told reporters outside the mine shaft that there was also compensation for the more than 70 miners who were rescued from the mine earlier in the week.

“I’m saying I have engaged with the mine. The effort that I have announced (the money) is specifically from the mine,” Zwane said.

“After our engagement with the mine, we agreed that ‘let’s look after our workers’. After all, these people work for all of us, we agreed. We came to an understanding that those who survived will each get R50,000 and for the three still trapped underneath the soil, by the time we get their container above the ground, each of them gets R200,000.”

He said the mine had been “selfless” in the deliberations.

Zwane said this was not the time for South Africans to be pointing fingers and trading blame.

“We have a crisis. People are trapped under the ground for the last eight days. Our focus should be to get the people above the surface and be able to support their families and give them hope. The issues of investigations and what caused the accident, we will deal with that after we have achieved our main goal – to save the people from this atrocity,” said Zwane.

“The rest is in capable hands. I can assure our people, we will leave no stone unturned in dealing with whatever we need to deal with at the right time.”

Some of the family members of the 3 miners trapped LilyMine @eNCA pic.twitter.com/6r8qJuxGkN

Saturday marked eight days since Yvonne Mnisi, Pretty Mabuza, and Solomon Nyarenda were trapped underground when the lamp room container they were working in fell into the sinkhole created by a collapsed crown pillar before being covered by huge rocks.

Zwane called for restraint on discussions regarding whether the intervention at the Lily Mine was still a rescue mission for the trio, or had now turned into a recovery mission.

“We are dealing with people’s lives here. I think we need to be very careful. These people have families here, that are hopeful. Ours is to stay with the families that are hopeful and pray that a miracle happens and the people get to the surface alive,” said Zwane.

“Let’s see, as the days and the week progresses. I’m sure if any call needs to be taken at that point, we will jointly take that call with everybody. For now, I call on all of us not to pre-empt the situation, let’s support the families and let’s be hopeful.”

Association of Mineworkers and Construction Union (Amcu) president Joseph Mathunjwa said he remained optimitic that the three miners would be brought safely to the surface.

“We are very optimistic. If the families [of miners] are still optimistic, why should we lose hope? We cannot lose hope at this point in time,” Mathunjwa told journalists at the collapsed mine shaft.

“We need to appreciate that the rescue started at mine [level]. It moved to provincial and other provinces like Limpopo were here. We are escalating it to national. You can’t just rush to the office of the president [Jacob Zuma] and try to declare this accident as a national disaster without using the expertise around you,” said Mathunjwa.

But he suggested the time had now come to approach Zuma so that more resources could be mobilised.

“We are having a co-operative kind of operation. We are now calling on the Mpumalanga premier [David Mabuza] to consult… [Zuma] to declare this a national disaster in order to get more resources and expertise,” said Mathunjwa.

However, another major ground collapse at the mine early on Saturday morning was “a setback” for the rescue mission, he said.

Vantage Goldfields said rescue operations at the mine were suspended after the ground collapse occurred at 5am.

Some of the rescue personnel coming from inside the mine LilyMine @eNCA pic.twitter.com/F2Dzxu3gXm

In a statement issued on Saturday, the mining company said all search and rescue teams were safely evacuated as a new geotechnical assessment was needed before the resumption of search and rescue operations could be considered.

“Conditions are extremely unstable underground at Lily Mine following a further collapse of the south wall of the open pit,” Vantage Goldfields CEO Mike McChesney said. “I cannot compound this disaster by risking the lives of the rescue teams.”

The company said rescue teams had significantly increased the extraction rate of rocks and debris in the past 24 hours before the new ground collapse.

International specialists brought to Lily Mine had confirmed that the pit area was unstable as ongoing ground movement was detected, it said