WATCH: How sign language interpretation should have been done 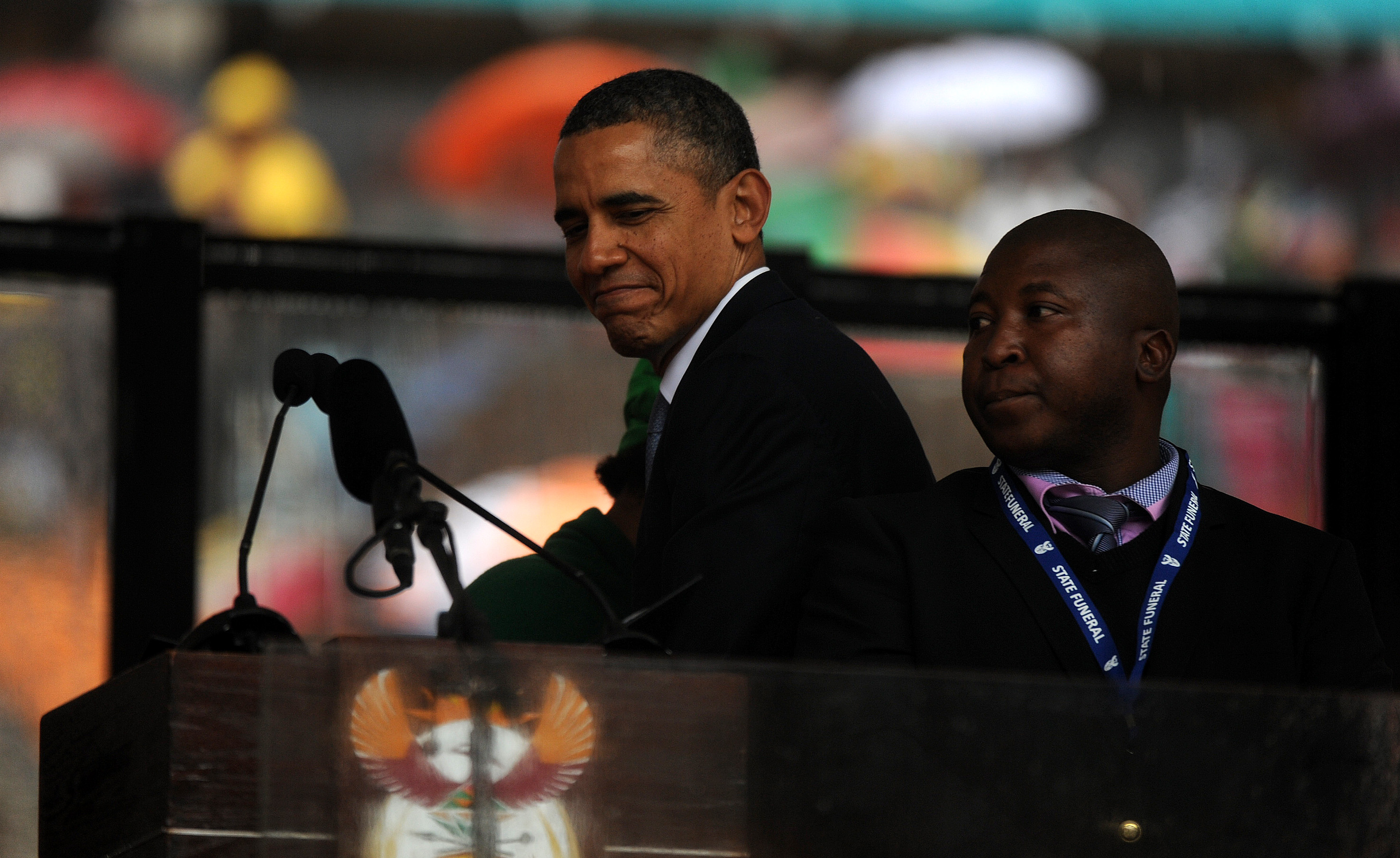 US president Barack Obama walks to the podium as sign language interpreter Thamsanqa Jantjie looks on at the Nelson Mandela memorial on Tuesday, 10 December 2013. Jantjie is accused of using incorrect signs. He's also admitted to being schizophrenic.

JOHANNESBURG - A language rights violation has been registered with the Pan SA Language Board (PanSALB) after the use of incorrect sign language at the memorial service for former president Nelson Mandela.

The board was concerned that the incorrect sign language displayed not only harmed those living with a disability, but also embarrassed and disrespected the proceedings, PanSALB CEO Mxolisi Zwane said on Thursday.

Mandela had fought for the freedom of language rights and had prevented the marginalisation of one community by others on the basis of language, he said.

The interpreter, Thamsanqa Jantjie, was metres away from the likes of President Jacob Zuma, US President Barack Obama, Cuban President Raul Castro, and Graca Machel during proceedings at Mandela&39;s memorial at FNB Stadium, in Johannesburg, on Tuesday.

"Investigations are currently underway and a comprehensive report will be communicated to the general public once the process is completed," said Zwane.

PanSALB believed the use of incorrect sign language was misleading and disrespectful, and that strong measures were required against those involved. It called on the government to fast-track the signing of the SA Language Practitioner&39;s Council Bill into law to ensure language facilitation services were regulated, and that whoever rendered the service was competent.

"We are so happy that a complaint has immediately been launched not only to us, but also to government to ensure that deaf people, who have been disrespected during the proceedings, are afforded the respect they deserve," said Zwane.

PanSALB had fought hard to ensure official languages, SA sign language, and Khoe, San, and Nama languages were recognised and treated fairly, equitably and with respect, he said.

Delphin Hlungwane of the Deaf Federation of South Africa (DeafSA) has said that Jantjie&39;s signage is completely indecipherable.

“He is not using South African Sign Language, nor is he using any recognisable sign language in the world," she said.

"He isn’t using any dialect of any sign language in the world; we cannot transcribe him; he is not using a real language.”

eNCA.com has created a series of GIFs to show you a comparison between the sign language intepreting conducted by Thami Jantjie at Mandela&39;s memorial service on Tuesday, (as seen at right, below) and how it should have been done, as displayed by DeafSA&39;s Delphin Hlungwane (as seen at left below).