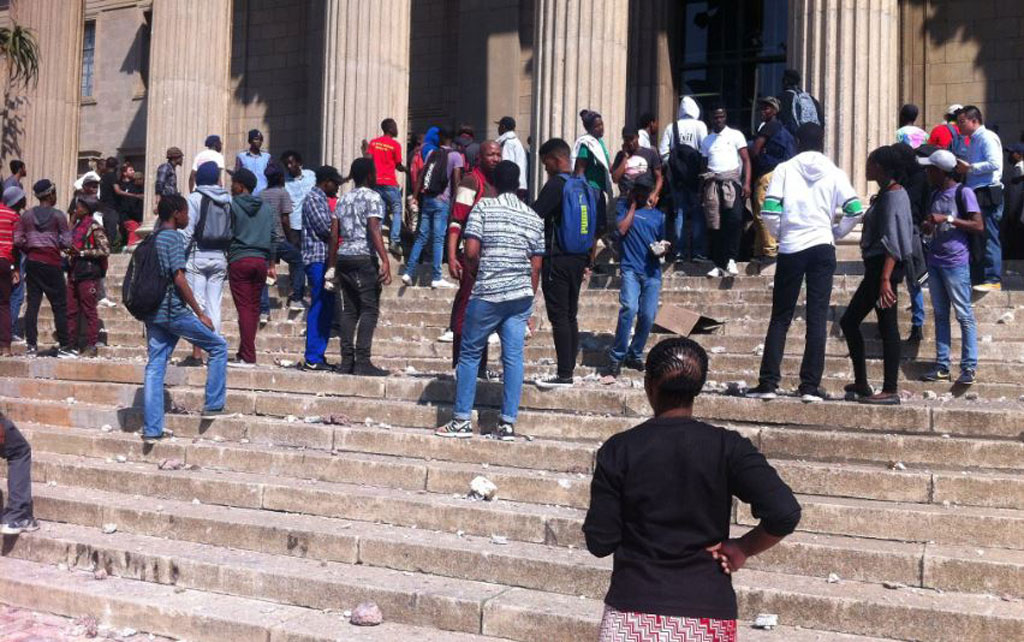 Students stand on the steps of the Great Hall at Wits University on 20 September 2016 after throwing stones at security guards.

JOHANNESBURG - Protests took a turn for the worse on Wits campus on Tuesday afternoon, when a number of students threw rocks and stones at security guards on the steps of the Great Hall.

Footage from Wits during Fees2017 clash with security, follow our live blog for more >> https://t.co/t3VOMmGsPX pic.twitter.com/bdfOIVngii

Footage from Wits during Fees2017 clash with security. Get the full story on https://t.co/JDOX5x0GPW pic.twitter.com/XlcHU1jXY9

WitsShutdown Wits Fees2017 students fighting their way in and security fighting back pic.twitter.com/G3PrblNwmQ

Security guards were seen throwing the same rocks back at the students.

The Wits University student protest over fees spread from the main campus on Tuesday morning as police fired stun grenades at protesters.

Students marched from the Braamfontein campus to the education and medical campuses in Parktown.

The university has decided not to suspend its academic programme, despite hundreds of students protesting. It says protesting students will be arrested if they do not comply with orders from police and security personnel.

At least 31 people were arrested on Tuesday morning when a group of protesters blocked entrances to the Braamfontein campus, but were later released on a warning.

The students are protesting to demand that fees not be increased next year.

Demonstrations on Monday and Tuesday are a response to the government&39;s recommendations to universities regarding fees. Higher Education Minister Blade Nzimande announced on Monday that universities and technical colleges would determine fee increases themselves, although the government recommended these be no more than 8%.