Violence against women and children still a major battle in SA 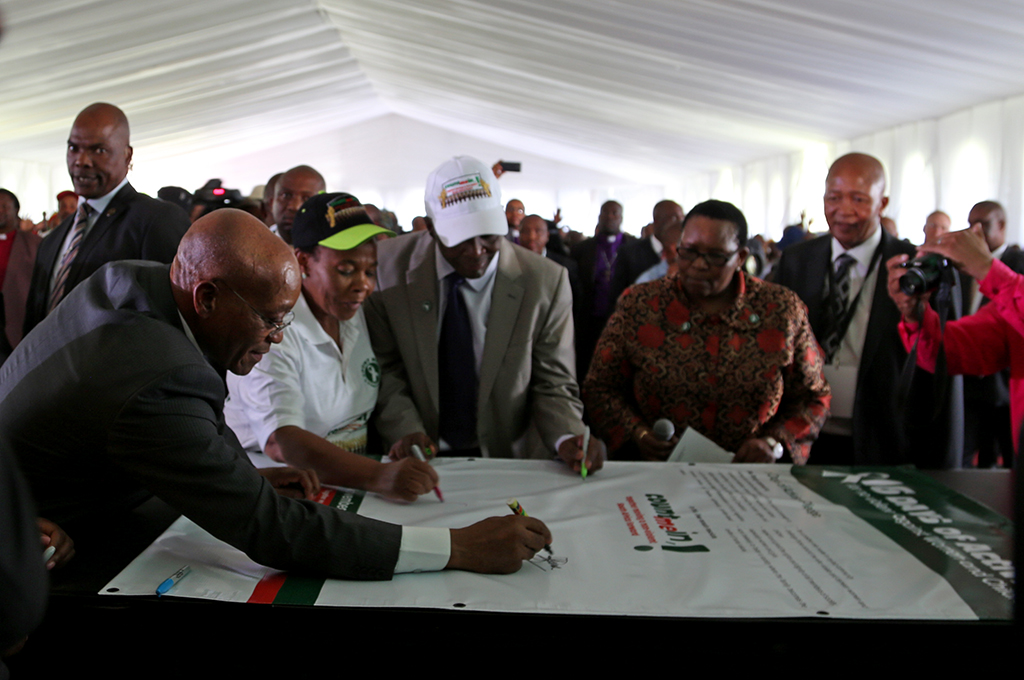 President Jacob Zuma and Minister of Women in the Presidency Susan Shabangu sign the pledge to commit to bringing an end to violence against women and children. The pledge was signed at the launch of the 16 Days of Activism campaign in Reiger Park.

REIGER PARK, GAUTENG - In 2008 Sharlene January’s entire world collapsed. One night people drove past her house and shot her husband and sister dead.

“It was so random, they were burning tyres and driving around and just shot at us,” she told eNCA.com.

Age 51, she is now a single mother and bears the emotional scars of pain and loss and a gunshot wound from the same night.

Six years later the mother of three is one of the people attending the launch of the 16 days of activism campaign in Reiger Park on Tuesday, 25 November, 2014.

There has still been no justice for the murders. The case continues to be postponed again and again.

“I want to know what my rights are. This violence happens every day but nothing happens, what can we do about it?”

January says Reiger park needs an activism campaign, not just 16 days of the year, but all year around.

The Department of Women, Children and People with Disabilities is mobilising the country in their 16 days campaign with the slogan, “Count me in.”

They have recognised that further actions are needed explained Minister of Women in the Presidency, Susan Shabangu.

“We are going to roll out the 16 days campaign as a year-long programme,” she said.

President Jacob Zuma attended the event and spoke of the Constitution.

“Despite the Constitution and laws we have, the scourge of violence against women and children continues to occur,” said Zuma.

The President read the names of children who have died in violent crimes recently, such as Taegrin Morris and Zandile and Yonelisa Mali, to name a few.

“We share the pain of the loss of all children in the country as a whole,” he said.

“Abusers murderers and rapists have no place in our community,” said Zuma.

Address by President Jacob Zuma to the Launch of 16 Days of Activism of No Violence Against Women and Child...

“I was walking to work and there was a small two-year-old child walking alone in the road,” he said.

Twara stopped and took her to the neighbours&39; house and they said the mother went to work.

“I felt afraid and panicked, children shouldn’t be left alone like that,” he said.

This isn’t the first time Twara has come across abandoned children and he usually takes them to police officials.

Ambassador of the 16 days campaign, musician Selaelo Selato, called on men to change their behaviour, “I want to encourage my brothers to seek help if they need it and not to take matters in their own hands," he said.