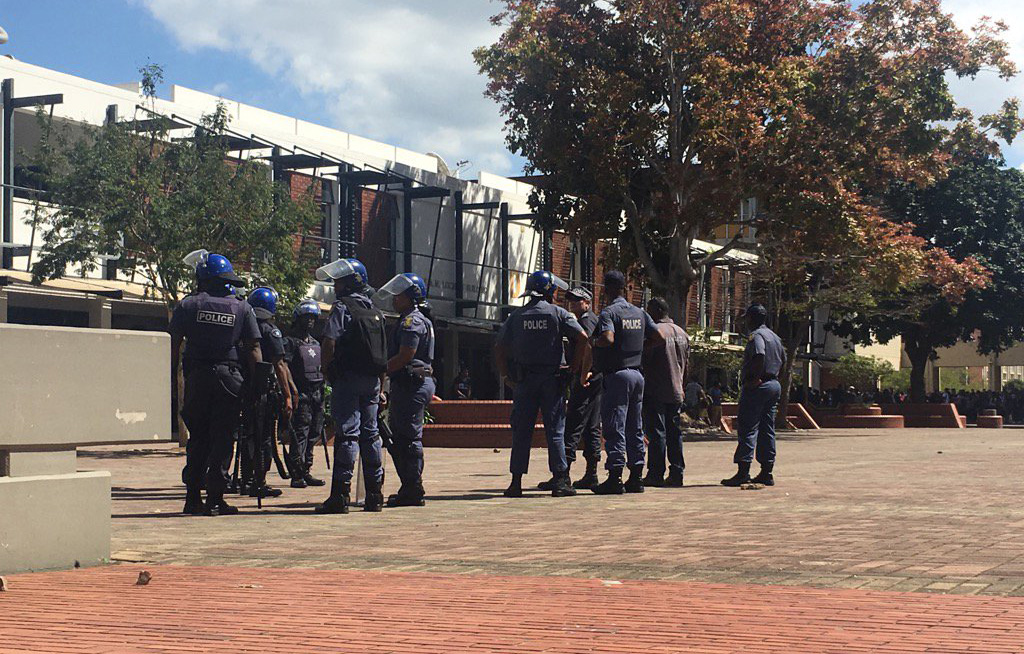 Heavily armed officers on the Westville campus of the University of KwaZulu-Natal.

DURBAN – Police and students engaged in running battles at the Westville campus of the University of KwaZulu-Natal on Monday morning.

The day began with a stand-off between students and university security, but erupted in violence when students started charging security after police withdrew.

The students, numbering well over a thousand, stormed a security vehicle at the quadrangle on campus and overturned it after security personnel abandoned it.

The police returned and a battle ensued in the university residences, just below the main campus.

Classes have been called off at UKZN Westville @News24 #FeesMustFall pic.twitter.com/CXT12A2NEn

Students threw rocks and other objects, including ironing boards, tables and chairs, while police responded with rubber bullets, stun grenades and teargas.

#UKZN Westville police are entering the residence, as a SAPS helicopter circles above pic.twitter.com/GTOCf6rTl4

#UKZN some students using ironing boards to block themselves as stones are thrown pic.twitter.com/c2IgBzVIud

Fridges were dragged out to be used as shields, while fire extinguishers were also deployed by the students, a number of them masked their faces.

#UKZN fridges are blocking the entrance to the residence pic.twitter.com/d0WLaKRD4X

One police officer was injured when a bottle struck him on the arm and he was taken away by paramedics.

A fire was also started in the toilets of the students’ union building, while fire hoses were also opened by protesting students.

The eThekwini fire brigade was on standby throughout Monday morning.

Roads throughout the campus was littered with debris.

#UKZN the area has become a no-go zone. Protestors are returning as police warn by-standers to move back. pic.twitter.com/ol5lf8g9oU