VIRAL: Seen in court, day eight - A collection of the best clips 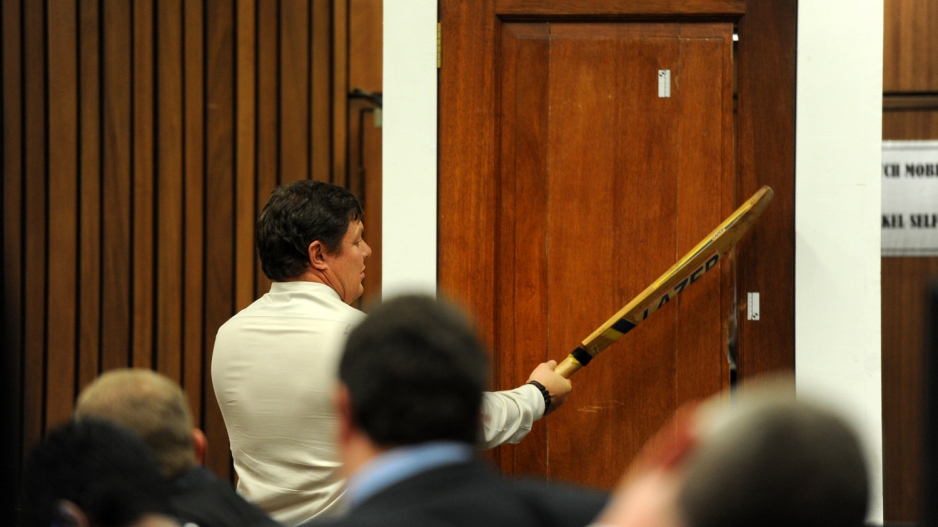 Police forensic expert Colonel Johannes Vermeulen holds a cricket bat while standing next to the door of murder accused Oscar Pistorius' toilet during cross-examination at the North Gauteng High Court in Pretoria on Wednesday, 12 March 2014.

PRETORIA - Day eight of the Oscar Pistorius murder trial began with the athlete walking into the courthouse alone.

State Prosectuor then re-examined Pistorius’s friend who testified that Pistorius drove with a gun between his legs on the way from the Vaal river during a shooting incident in 2012.

A second forensic expert has given testimony in the Oscar Pistorius murder trial.

But on Wednesday, the court was given a demonstration.

A mock toilet cubicle has been set up next to the witness box.

The police’s Colonel Gerhard Vermeulen demonstrated how Pistorius may have broken down the bathroom door after shooting Reeva Steenkamp.

Roux asked Vermeulen if in his view, murder accused Oscar Pistorius would have been able to balance on his stumps while hitting the cricket bat on the bathroom door on the night Reeva Steenkamp was killed.

Vermeulen was also interrogated about why he did not see wooden splinters next to the door that Oscar Pistorius shot through on the night Reeva Steenkamp died.