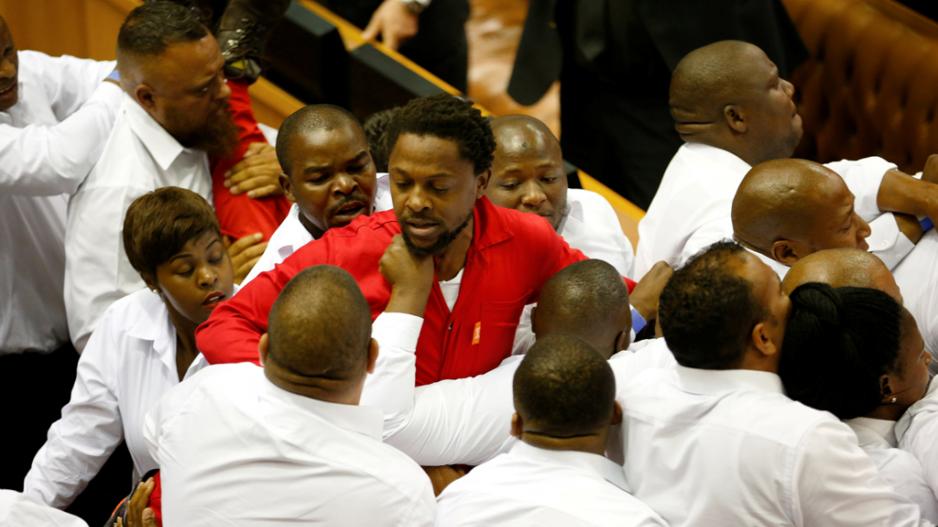 9 Feb 2017 - Security officials remove EFF MP and spokesperson Mbuyiseni Ndlozi and others during President Jacob Zuma's State of the Nation Address (Sona) to a joint sitting of the National Assembly and the National Council of Provinces in Cape Town.

JOHANNESBURG – Parliamentary service officers and members of the Economic Freedom Fighters (EFF) exchanged blows once again during the State of the Nation Address (Sona) on Thursday.

Speaker of Parliament Baleka Mbete ordered the officers to evict the EFF MPs after they refused to let President Jacob Zuma speak.

The EFF fought back as security men dragged them from the National Assembly with some MPs using their trademark hard hats as weapons.

During the scuffle, Zuma could be heard laughing.

Last year, the same scene played out between the EFF and Parliament security.

The EFF had, for more than an hour, prevented Zuma from delivering his 10th Sona.

Democratic Alliance chief whip John Steenhuisen later stood up to challenge Mbete on allowing security forces into Parliament, in a violation of the law and court orders.

At this, Steenhuisen was shouted down from the ruling party benches as a “racist”.

The DA then proceeded to leave the National Assembly.

#SONA2017 President Zuma to now continue his address and a view from outside. LIVE >> https://t.co/dueJDKtUw9 pic.twitter.com/s82XQqqCaT

After the DA left the National Assembly, leaving Zuma to finally deliver his speech to a half empty chamber, Steenhuisen said South Africans would rise against him for returning to apartheid era security tactics.

“President Jacob Zuma had led this country into a police state. We saw what PW Botha did in the 1980s when he turned the security forces on the citizens of the country. The people rose against them and they will rise against Zuma,” he said.

Steenhuisen said even if the DA felt the EFF “took it bit too far” when they heckled and interjected for more than an hour, the use of force was excessive and the deployment of military and riot police in Parliament was wholly unlawful.
“It was not commensurate, the level of violence and damage does not belong in a constitutional democracy.”

Fellow DA MP Gavin Davis said he was shocked to see security men kick EFF women who had fallen to the ground.
“It was sickening.” --  Additional reporting: African News Agency

#SONA2017 Julius Malema speaking outside Parliament after being thrown out. Video by @LA_JANSEN of #eNCA pic.twitter.com/0YYE0ZRVLQ

#SONA2017 Mmusi Maimane speaks outside Parliament after walking out pic.twitter.com/vekDAhILBN 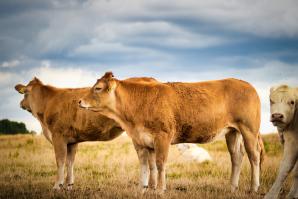