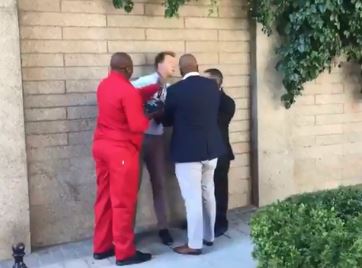 [Must Read] EFF DP FloydShivambu @FloydShivambu Statement of Apology on the Scuffle with @News24 Journalist pic.twitter.com/fEtFHiY4bA

The South African National Editors Forum (Sanef) said it is unacceptable for a Member of Parliament (MP) to intimidate a journalist, whatever the circumstances.

SANEF condemns the incident in the strongest possible terms and is extremely disappointed by Shivambu’s actions.
This type of intolerant behaviour is unacceptable in a democracy.

Shivambu was caught on camera manhandling a journalist.

Shivambu and an unknown man can be seen putting their hands on Netwerk24 multimedia journalist Adrian de Kock.

De Kock claims Shivambu attacked him as he arrived at Parliament.

He approached Shivambu to take pictures and get a comment.

De Kock said Shivambu grabbed him by the throat.

"The last thing you would expect is a Parliamentarian attacking you at Parliament."

The EFF is yet to comment on the incident.

Parliamentary spokesperson Moloto Mothapo says it will look at the facts before commenting.

He says De Kock can lay a complaint if he wishes to do so.

Sanef said it will take the matter up with the EFF.

"We welcome the fact that De Kock will go to the police to lay a charge of assault against Shivambu," it said.

Parliament issued a statement on the matter on Tuesday, saying it noted "with grave concern" the incident.

"Parliament is concerned by the incident as it is not in line with its commitment to press freedom and a media-friendly environment as enshrined in the Constitution&39;s Bill of Rights. The Presiding Officers will investigate the alleged incident and, where necessary, determine an appropriate decision," read the statement.

As a member of parliament Floyd Shivambu is entrusted with protecting our hard earned media freedom, and freedom of expression as is enshrined in our Constitution.
He should lead by example & should champion journalists’ protected right to do their work without fear or favour.

It is unacceptable for a Member of Parliament to intimidate a journalist whatever the circumstances.
SANEF will take the matter up with the EFF.
We welcome the fact that De Kock will go to the police to lay a charge of assault against Shivambu.

SANEF calls on authorities to thoroughly investigate the complaint so that Shivambu can be held accountable for his actions.