WATCH: Inside a spooky old uranium mine in the Karoo 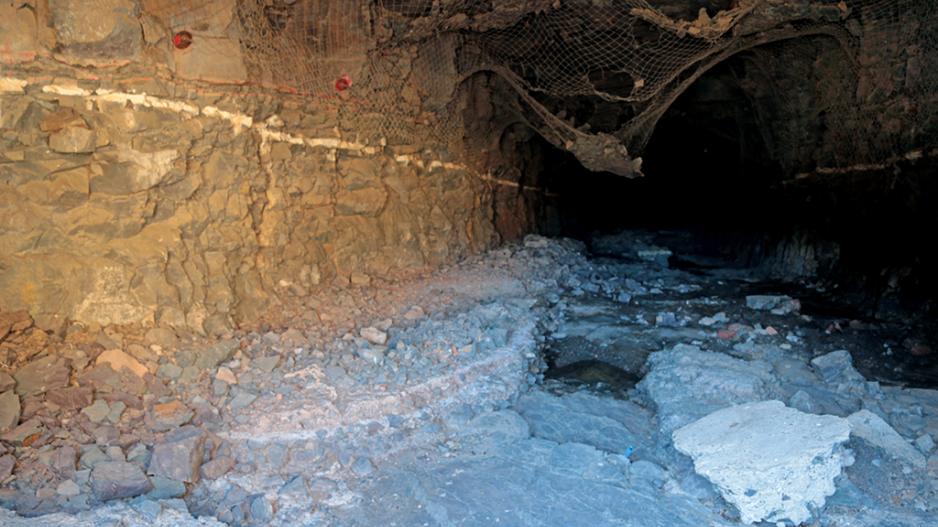 The entrance of the Cameron mine shaft where trial uranium mining was conducted in the 1970s. The mine shaft has been fenced off by Tasman RSA mines and will be part of a new operation.

BEAUFORT WEST – Surrounded by a barbed wire fence and large yellow signs warning of radioactive material, is the old 400m-metre deep Cameron mineshaft where some of the earliest trial mining in uranium ore began in South Africa in the 1970s.

Large piles of what looks like grey stone lie stacked together in neat rows. This is the uranium ore that was recovered from the shaft and crushed in a processor during the trial mining period.

Watch a video of the old Cameron shaft:

(Special thanks to the Tasman RSA mines operation for allowing access and permission to shoot at the site.)

A small decline of about 40 metres marks the entrance to the underground mine operation. Rusted large metal barrels lie on the one side. The opening of the shaft is gated and locked.

If you’re quiet and you look deep through the gate down the shaft, you might see two pairs of eyes belonging to bats, looking back at you.

Esso Minerals Ltd operated this shaft and its processing site until the commodity price of uranium dropped and the operation was abandoned.

A wasteland of hazardous radioactive material was left behind. Australian company Peninsula Energy through local subsidiaries Tasman Pacific Minerals and Lukisa JV Company have bought the land and fenced off the old mining operation.

This will become part of the new Tasman RSA mines operation and is set to be the centre of the town’s uranium mining operations. This could begin in less than five years’ time if mining licenses are approved by the Department of Mineral Resources.

PHOTO: An old processor which crushed uranium ore mined from the Cameron shaft as a part of trial mining in the 1970s. Credit: eNCA/Bianca Ackroyd.

But what is the impact of this radioactive material, left unattended for many years?

Local farmers reportedly didn’t know it was toxic and collected the uranium ore for their gravel farm roads.

Farm animals grazed in the area, feeding on plants that could have been contaminated by radioactive dust.

No studies have been done on the health impact, but years ago a University of the Free State student evaluated the toxicity of the material.

In 2003, Nicolaas Scholtz completed a study for a Master of Science degree in the geology department.

The study, “Assessment of potential toxic influence of uranium trial mining in the Karoo uranium province” found that the Ryst Kuil site and Cameron shaft posed an environmental hazard.

The conclusion of the study shows the following:

“An assessment on the effects of uranium trial mining in the Karoo Uranium Province revealed the presence of anomalous heavy metal concentrations in water, sediment, soils and crops.”

These values are locally above maximum allowed for human and/or faunal consumption.”

“The failure to properly remediate the trial mining areas through removing ore stockpiles, waste and mining structures as well as preventing entry into open pits and shafts leads to the existence of an environmental hazard.”

Lack of trust in mining

The lack of rehabilitation of this area and other historical mining areas has lead to public distrust of new mine projects.

The problem with acid mine drainage and contamination of water as a result of historical gold mining on the Witwatersrand reef is a well-known reminder for South Africans concerned about mining legacy issues.

Local representatives of the indigenous people of Southern Africa are opposed to the new mine and want to keep the land as it is.

“Open pit mining is not what we should be doing with this land. It’s important that we keep the Karoo as it is. The plants that grow here you don’t get anywhere else in the world,” said Billy Steenkamp, co-founder of the Indigenous People’s Association for Community Economic Development of South Africa.

Watch a clip from the interview with Billy Steenkamp:

“I think you’ve got a much more regulated environment these days and much more stringent requirements for one, the approval of mining and two for the rehabilitation and basically addressing any issues that might be created by the process of mining,” he said.

Watch a clip from the interview with Gus Simpson, Peninsula Energy CEO: