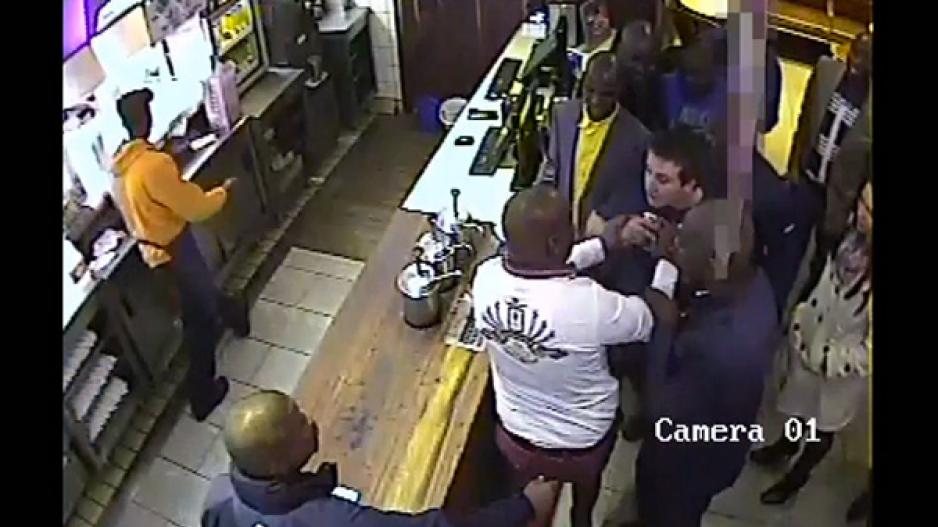 A screen grab from a restaurant's CCTV footage shows EFF leader Julius Malema getting physical with a fellow patron.

PRETORIA – Economic Freedom Fighters leader Julius Malema is once again embroiled in controversy after CCTV footage showing him aggressively confronting a man at a fast food outlet was released on Thursday.

The incident took place at a take-away restaurant in Tzaneen, Limpopo on August 6.

The complainant in the matter, Cassie Moller, took his complaint to civil rights organisation AfriForum, who helped him lay a charge of assault on Thursday.

AfriForum deputy CEO Ernst Roets held a press conference on the matter on Thursday morning when he released information on the alleged scuffle.

“AfriForum today is planning to assist a member of the public in submitting criminal charges of assault, intimidation and crimen injuria against MP and leader of the Economic Freedom Fighters, Julius Malema,” Roets said.

Roets explained that they took the decision to assist the victim after he approached them for assistance.

The footage, which is edited and just over four minutes long, shows a woman standing in front of the counter in the restaurant. An explanation shown at the beginning claims she was waiting for two burgers.

They were drinking gold-coloured liquid from whiskey tumbler glasses. The men allegedly asked the woman where they could "go to continue drinking”.

The footage shows her waiting approximately 15 minutes for the food when her husband enters the restaurant and asks staff behind the counter about why their order was taking so long.

In his affidavit, Moller explains he felt a hard slap on his back and when he turned around there was a man standing very close to him who said, “Who do you think you are!?”

“At the point I recognised the person as Julius Malema,” said Moller in a sworn affidavit.

“He also started telling us Get out! Get out! And he called me a Boer again."

Malema allegedly said ""F*(k you, you Boer! F*&k you! I will F*(k you up!" according to Cassie Moller @eNCAnews Afriforum EFF Assault

“He started pushing me against my will and he tried to physically remove me from the restaurant.”

Roets said AfriForum only received the footage two weeks ago.

"Initially, the restaurant manager did not want to release the footage. Our lawyers were able to obtain the footage with a PAIA application,” he said.

This is an important case for AfriForum to take up, said Roets.

“Malema is well-known locally, and as public representative his behaviour in this matter indicates that he regards himself above the law and above average citizens.”

"We believe this incident may have serious consequences for Malema&39;s career in parliament" - Ernst Roets Afriforum Malema EFF Assault

The charges of assault, intimidation and crimen injuria will be laid at Tzaneen police station on Thursday morning at 11am.

eNCA.com has been unsuccessful in efforts to reach Malema for comment.

In an affidavit by the patron Cassie Moller he alleges Malema called him a "Boer" & said "I will f*ck you up" repeatedly.