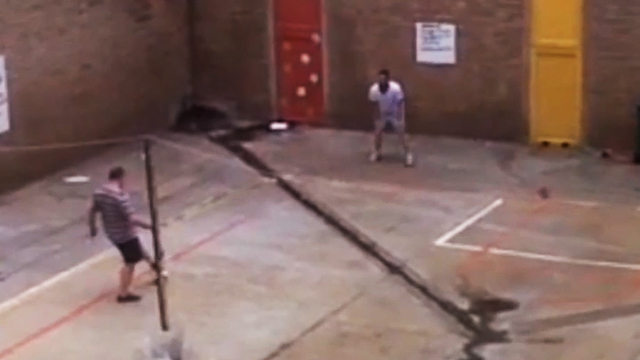 The Daily Sun has published a video on YouTube of Oscar Pistorius and Radovan Krejcir playing a game of soccer in prison. YouTube/DailySunSA

The Daily Sun reported that a source provided them with a video of the two playing soccer in a courtyard.

The source said fellow inmates were angered over the "special treatment" the two men are apparently receiving.

Krejcir made a request in July 2014 for a bicycle and treadmill so he could exercise, and the request was approved.

He however complained to prison management that the equipment was offered to Pistorius to train on "without his knowledge".

The source said the two men are now training together.

Pistorius was sentenced to five years in prison for culpable homicide after his girlfriend Reeva Steenkamp was shot on Valentine&39;s Day 2013.

He also said allegations by offenders that they are denied games is "unfortunate and misleading to the public".

eNCA has verified the authenticity of the footage, which appears to have been taken with a cellphone.

It’s unclear at this stage who took the video.

Pistorius’s legal team is back in court on Friday.

They are asking for the right to argue that the State cannot appeal the athlete&39;s culpable homicide conviction.