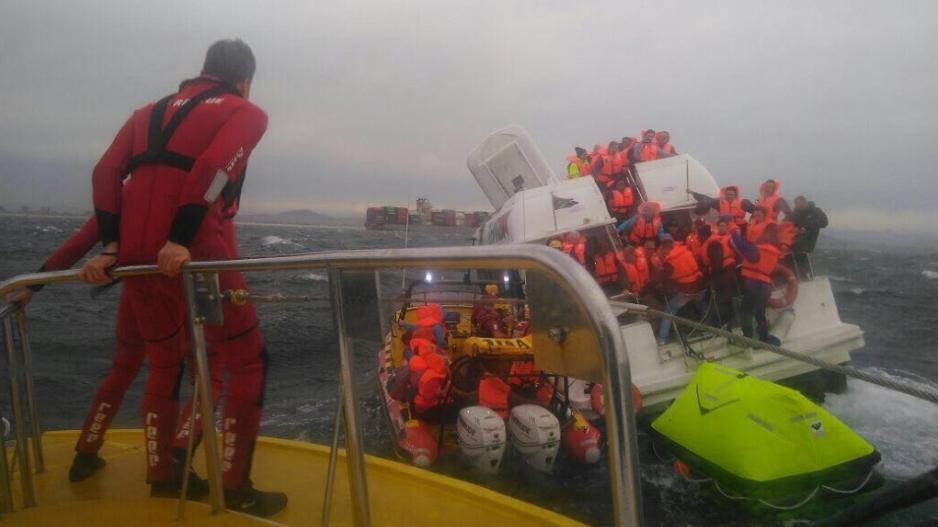 68 people were rescued from a sinking ship off the coast of Robben Island on Friday 15 September 2017.

CAPE TOWN - Authorities responsible for operating the Robben Island ferries were ordered to report back next year on the partial sinking of a vessel with 64 tourists on board.

Tourists and crew members on board the Thandi ferry were left traumatised when it took on water on September 15 and its nose started sinking in rough seas.

The National Sea Rescue Institute had to tow the vessel to Murray’s Bay Harbour at Robben Island.

The Western Cape legislature's standing committee on economic opportunities, tourism, and agriculture on Wednesday said it was dissatisfied with the response from authorities so far.

Robben Island is one of South Africa’s main tourist attractions and those wishing to see the place where many political activists, like Nelson Mandela, were imprisoned, have to take a ferry from Cape Town.

“I want to understand what has been done because this is a reputational issue and I think you’ve made very clear implications from your introduction what has been done by Robben Island so far whilst they are busy with investigations and all that,” said committee member Nomi Nkondlo.

Committee member Siyazi Tyatyam wanted to know from the Robben Island Museum and the South African Maritime Safety Authority how many people were on the Thandi and why no one was operating the engine.

The museum's Sandresan Thandroyan said the vessel could take 65 passengers and five crew members. "Now, on some of these vessels, they operate with what you might call a UMS status: un-manned machinery space. It might actually not be safe for anyone to be in this room.”

The South African Maritime Safety Authority's Gustav Louw said the boat had been surveyed recently and that he believed it was compliant with safety regulations. "People have their own opinions what the boat (was) supposed to have looked for - that doesn’t mean the boat is not compliant. So, I just want to put that on record that when we talk about compliance we should look at what is in the regulations. Did the vessel comply with all those requirements? Yes it did.”

Robben Island is currently conducting an internal investigation along with the South African Maritime Safety Authority. The probe will be finalised in two to three weeks' time.