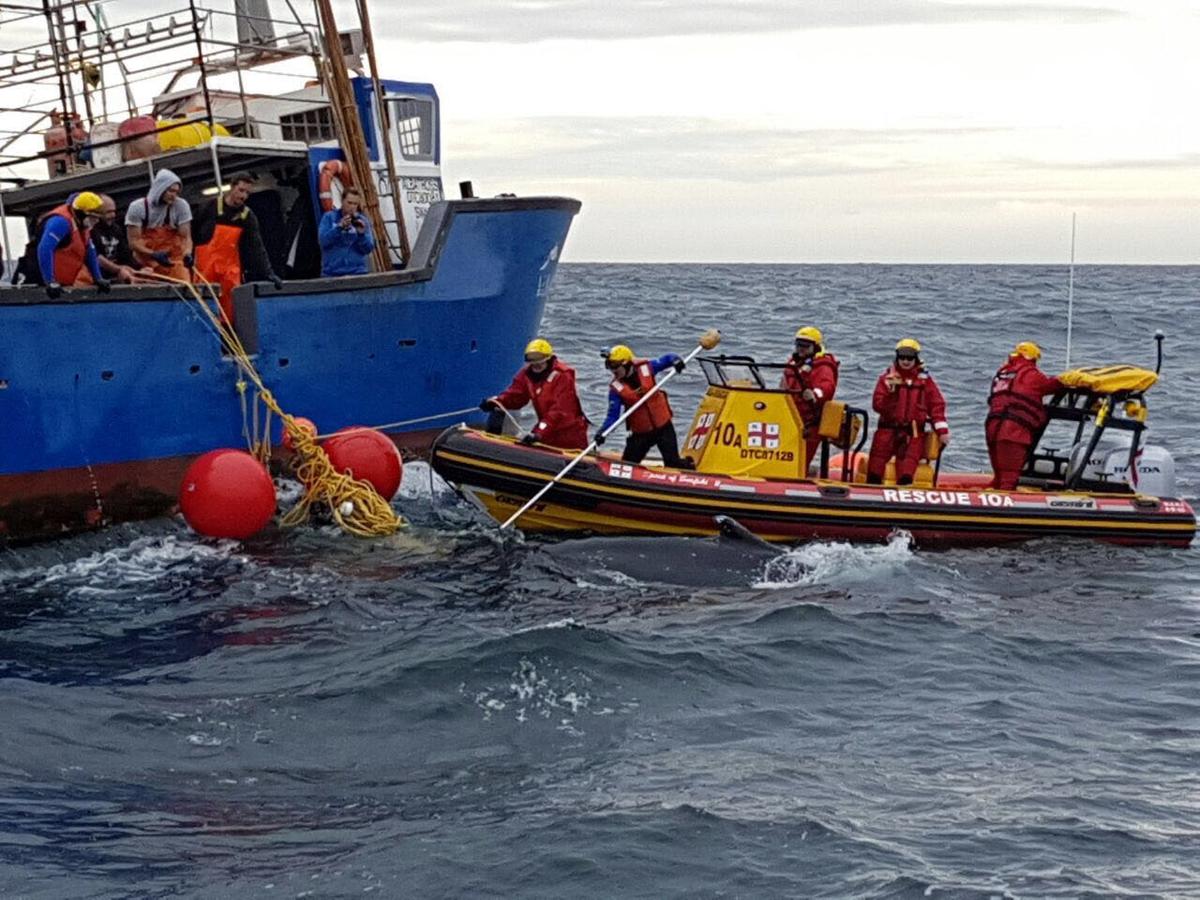 Volunteers free a humpback whale from ropes off Cape Point in the Western Cape on 7 Augusr 2016.

CAPE TOWN – A juvenile humpback whale has finally been freed after a marathon two-day operation deemed to be the most difficult disentanglement operation to date, the South African Whale Disentanglement Network (SAWDN) said on Sunday.

SAWDN spokesman Craig Lambinon said the operation started shortly after 3pm on Saturday when SAWDN volunteers were alerted following reports of a whale discovered by a local fishing ski-boat crew to be entangled in fishing rope and flotation buoys 500 metres off-shore of Cape Point on the False Bay side.

The National Sea Rescue Institute (NSRI) Simonstown&39;s sea-rescue craft, Spirit of Surf-ski II, went to the scene, followed a while later by the Spirit of Safmarine III, carrying the volunteers.

SAWDN and Environmental Affairs oceans and coasts head Mike Meyer said: The whale had at least five ropes entangled around the flukes and tail and the rope was twisted and entangled into a bird&39;s nest of rope. Although the whale had minimal movement it kept avoiding the efforts by SAWDN to cut at the rope by diving below the surface.&39;

It was suspected that the whale might have dragged with it the the rock lobster nets, which appeared to have become snarled in rocks closer to the shore, effectively anchoring the whale to the seabed.

The operation on Saturday continued after sunset and under floodlights, with at least three cuts made to rope. However, the operation became increasingly hazardous, particularly with the whale diving to avoid the cutting efforts. It was deemed too unsafe to continue at night and the operation was suspended at 7pm.

An all ships maritime navigational hazard alert was posted warning vessels in the area of the whale’s position, and the alert continued to be broadcast throughout the night. The local ski-boat fraternity was also notified to avoid the area.

NSRI Simonstown duty crew volunteered to launch again before sunrise on Sunday, They arrived on the scene at first light to find the whale in the same place. The disentanglement operation continued.

Although the whale showed signs being tired, efforts to cut the ropes continued to be hampered by it diving. The operation required more resources and a larger vessel was summoned.

Fisherman Gary Nel volunteered the deep-sea fishing vessel Albatross from Kalk Bay Harbour and once on the scene the crew were able to lift the lines from a relative distance away while the SAWDN volunteers cut the lifted lines.

Eventually, after a seven-hour operation, all of the lines, estimated to be at least 11 wraps, were cut free of the whale and recovered.

The freed whale appeared to be strong and healthy and swam off.