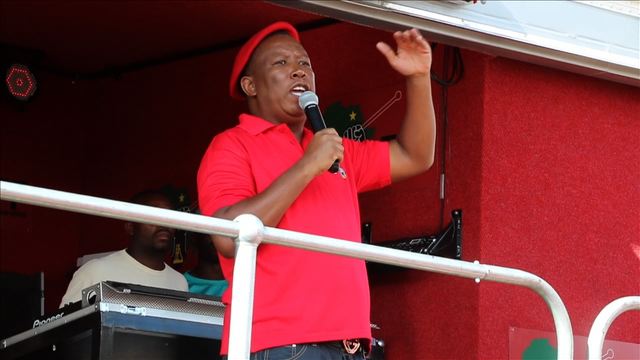 JOHANNESBURG, 17 April 2016 -EFF leader Juluis Malema addresses supporters in Zola on Sunday 17 April 2016, saying the EFF's mission is restore the dignity, fearlessness and fighting power of the people of Soweto.?

Speaking at a rally to celebrate the EFF's 4th anniversary, Malema said President Jacob Zuma, however, was using the issue of white monopoly capital to justify stealing.

“The problem is that this thing white monopoly capital is used by Zuma because he doesn't know what it means. He uses it for stealing. These ones use it to protect whites, they say it’s not there. Zuma says it there and must be defeated and replaced by a Gupta monopoly capital.

He said if a secret ballot is allowed for the vote of no confidence in Zuma, the president will be gone.

“Please South Africa, join us on the 8th of August. I can tell you now, if [Assembly Speaker] Baleka Mbete makes the vote a secret vote, on the 9th of August South Africa will have a new president. They are scared. If they were not scared, they would have given us a secret ballot by now. When we wanted votes of no confidence before, they were giving them easily because they were not secret ... we can't trust these ANC MPs”.