Why are the Tshwane protests so violent? 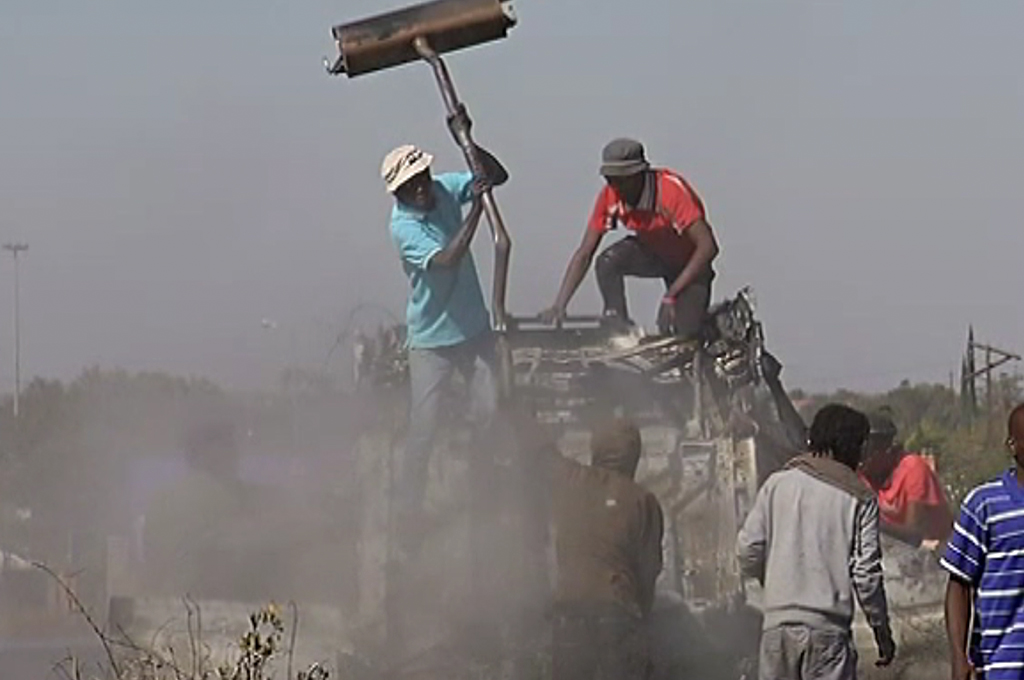 Hammanskraal, 21 June 2016 - Opportunists take what they can from a burnt vehicle on the N1 highway near Hammanskraal after municipal protests broke out on Monday.

JOHANNESBURG - Violent protests in Tshwane captured the nation’s attention on Monday night and most of Tuesday.

At the heart of this particular protest is the announcement of Thoko Didiza as the mayoral candidate of Tshwane ahead of the 2016 municipal elections.

eNCA spoke to a number of experts during the day of protests to find out who is protesting, why such violent actions are behind taken and what can be expected next.

Here are five vital questions about the protests that our analysts answered:

Dr Jackie Cilliers, head of African Futures and Innovation at the Institute for Security Studies, said that the people who took to the streets to destroy more than 20 buses are desperate.

“Everything depends on them winning or losing a councillor or mayoral seat. “It shows that politics has become the root to everything and the gatekeeper to wealth and privilege in South Africa,” he said.

Cilliers said this is a bad spot for the country to be in.

2. Why are the protests so violent?

“I do think that we would be making a big mistake if we contained this to the ANC because it is the largest party, here we are seeing a societal problem,” said Fikeni.

The violence is not limited to Tshwane, it’s been happening around the country where branches are divided over candidate lists.

Fikeni says the violence is “beginning to show itself in the form of political assassinations.”

He said violence was “without any doubt... the political culture that is taking route,” and that it’s important to consider what will happen if the ANC loses Tshwane or one of the other large metros.

“Will ANC constituents accept the outcome? Or, will we have very unstable municipalities even if party A or B continues because we have this culture where violence is the lingua franca (common language),” he said.

Professor Susan Booysen said that while it can’t be ruled out that there is a criminal element to the protests, violent protests are part of South Africa’s culture. "There is a protest element in South Africa.They set buildings and tyres alight and that is the way to get attention in the country in terms of politics,” she said.

Cilliers says that according to recent research, political protests will spread further, to rural and urban areas.

“It’s mostly going to be where contestation between the ANC and EFF is the most intense, so Gauteng is going to be the epicentre of that violence,” said Cilliers.

“The ANC is finding it very difficult to defend its track record of poor service delivery and poor leadership within its own constituency,” he said.

Earlier today ANC supporters clashed with the EFF, which had gone on a campaign visit to Tembisa.

Watch a video below of EFF leader Julius Malema demanding protection from the police:

4. What can be done to stop the violent nature of protests?

eNCA commentator Angelo Fick said that the level of violence could escalate.

So what can the ANC do to control its constituents and bring an end to the violent protests?

Cilliers says the ANC needs to find its moral compass.

“The ANC is the oldest liberation party in Africa with an immense history, but look who leads it at the moment and look at the example that it sets in terms of the policies,” he said.

Cilliers said the ANC has become a party that is largely “a rural-based traditionalist convervative party that presents no vision for South Africa.”

For the violent nature of protests to end, people’s lives needs to be improved and this can only be done through job creation.

“South Africa needs a fundamental restricting of our economy and a vision of not only how we build an inclusive political system but also an inclusive economic system,” said Cilliers.

“Without jobs we can’t do anything about inequality, we cannot deal with the joblessness and the hopelessness of many South Africans,” he said.

Protesters here have dispersed for now. But their anger still burning on.TshwaneUnrest pic.twitter.com/M6ON1CDDc7

5. What can be done to stop the unrest in Tshwane?

Dr Siphamandla Zondi, director at the Institute for Global Dialogue, said that the ANC leadership needed to communicate with branches in Tshwane to resolve the issue.

“Clearly it will be difficult to reverse this decision (of making Didiza the candidate for mayor) because if it did, the ANC would have to review the contested decisions in other places,” said Zondi.

ANC leadership should communicate with branches and “assure them that the leaders they are backing won’t be lost and might be redeployed.”

“They must communicate with the people,” said Zondi.