Why Homo naledi is our human ancestor 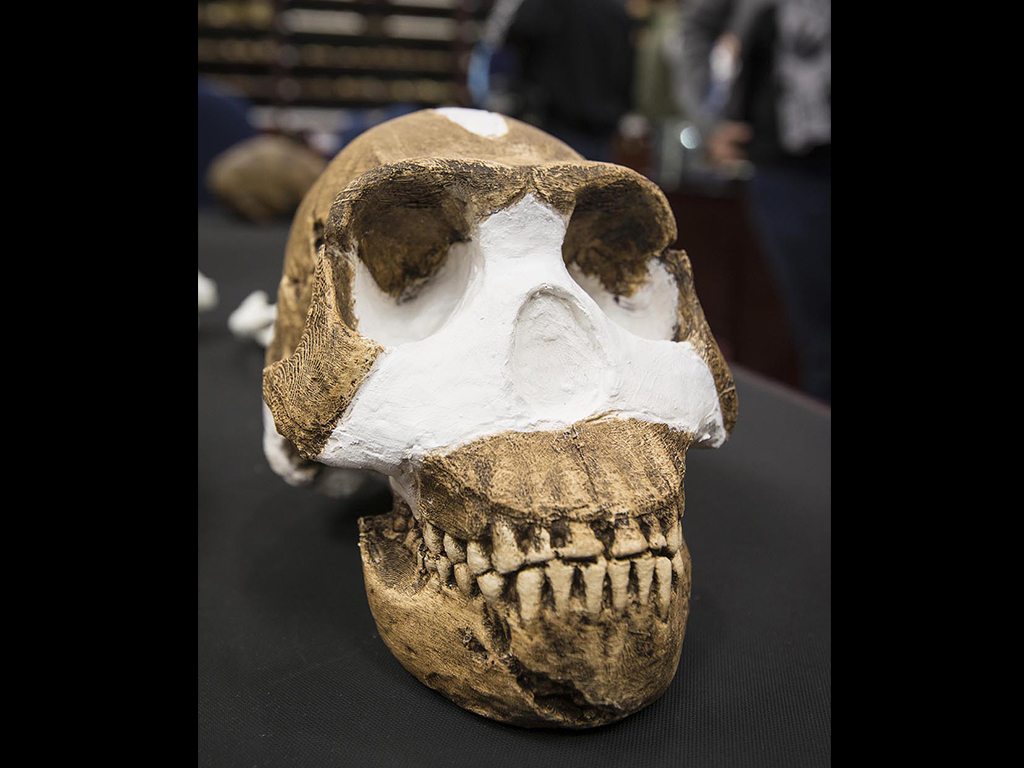 A replica of the skull of the recently discovered hominin species Homo naledi discovered in the Cradle of Humankind.

CRADLE OF HUMANKIND – The discovery of a new hominin species, Homo naledi, has puzzled researchers and scientists.

Palaeoanthropologist Lee Berger who is the leader of the Rising Star expedition which recovered the fossils, said the new human ancestor has surprised the scientific community.

“It’s a real mosaic… it&39;s got a tiny little head with a brain about the size of a fist. It&39;s got small indentation like a human’s but the teeth are shaped like something more primitive and a tall skinny body,” he said.

Fifteen individuals of the same species were discovered in 2013 in the Dinaledi chamber of the Rising Star Cave system in the Cradle of Humankind, about 50 kilometres from Johannesburg.

PHOTO: Chris Walker, Damiano Marchi and Pianpian Wei comparing fossils of the new hominin species Homo Naledi which was discovered in the Cradle of Humankind. Courtesy John Hawks/University of the Witwatersrand.

Where does this new species fit into the journey of humankind’s evolution?

Scientists aren’t exactly sure at this stage because they have been unable to accurately date the fossils after three different approaches failed.

“Unlike other cave deposits in the Cradle, the fossils are not found in direct association with fossils from other animals making it impossible to provide a faunal age,” said Berger, who is a Research Professor at the University of the Witwatersrand.

“There are also few flowstones that can be directly linked to the fossils, and those that exist are contaminated with clays making them hard to date, he said.

The team are still working to identify an accurate age of the fossils.

Berger: We can determine that this species is about 2.5 million years old but it&39;s not the age of these fossils @eNCA NalediFossils

The one thing Berger’s team is certain about is that Homo naledi is a human ancestor.

Similarities in the skull, legs and hands

There are a number of characteristics of the new species that allows it to be classified as Homo.

Firstly, the shape of the skull is similar to other specimens of Homo, even though the brain is small, similar to the brain seen in the genus Australopithecus.

“Also, the legs, feet and hands have several features that are similar to Homo,” said Berger.

PHOTO: The Mandible occlusal of the new hominin species Homo naledi recently discovered at the Cradle of Humankind. Courtesy: John Hawks/University of the Witwatersrand.

Do these fossils prove that humans originated in SA?

“We are limited to finding fossils where they were preserved, not necessarily across the whole area that human ancestors existed when they were alive,” he said.

“Here’s what we know, Homo naledi existed in South Africa, and left some spectacular traces of their passing that we are only now coming to grips with,” said Berger.

The cover of the October issue of @NatGeo which is all about our new human ancestor Homo naledi @eNCA NalediFossils pic.twitter.com/V4HJ0GFAWs

The fact that Homo naledi has an unexpected combination of ape-like and human-like features shows that scientists have “missed some key transitional forms in the fossil record” said Berger.

“This serves to highlight our ignorance about our own genus across the span of the African continent,” he said.

There are many unknown fossil species yet to be discovered.

Lee Berger: There are more fossils to be found - We won&39;t stop exploring @eNCA NalediFossils pic.twitter.com/pZmbbuQl3N

Going forward researchers should be mindful of the fact that some species of ancient humans may have exhibited very human-like behaviour, (like Homo naledi  burying its dead at the Rising Star Cave system) which in turn will have profound implications for the archaeological record.

Read more about the Homo naledi fossil announcement and why the Rising Star cave system is a fossil burial site.