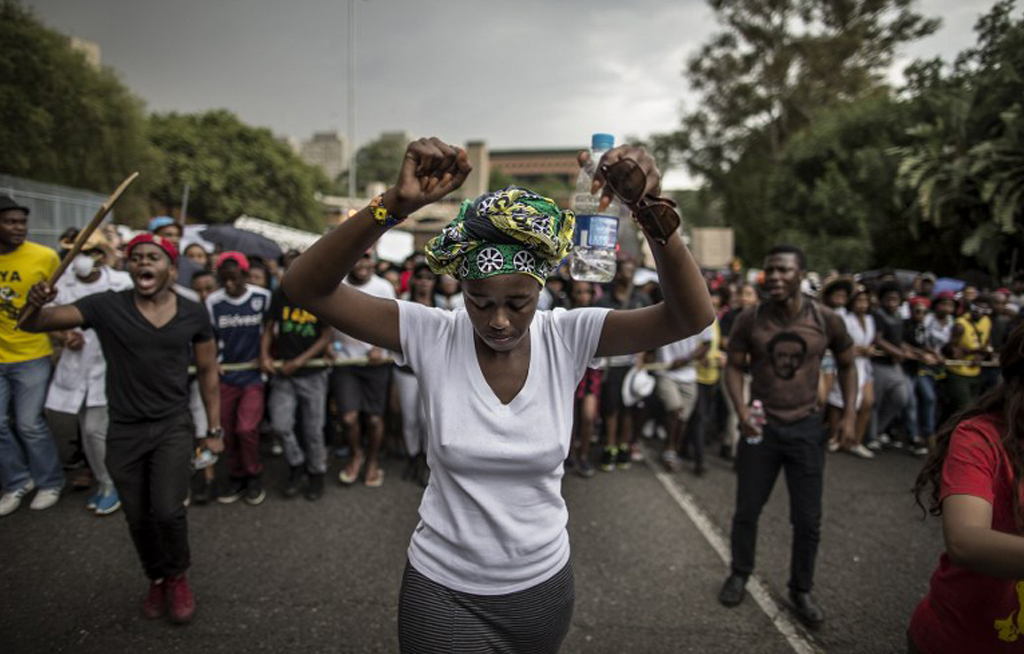 A young woman holds up her fists as students march through the campus of the University of the Witwatersrand in Johannesburg on October 21, 2015, during a protest against fee hikes.

JOHANNESBURG - The Witwatersrand University on Monday released a nine-point plan to deal with students’ concerns following two weeks of protests over fee hikes and also indicated that academic activities would resume on Tuesday.

Wits executive management said it was committed to implementing the plan, which included that the university:

– implement a zero percent fee increase for 2016, including academic, residence and related costs. The Presidency had agreed to underwrite the cost of this, provided that the university made some contribution;

– is prepared to address the increase in the upfront fee payment;

– recognises that the protests have adversely affected the ability of students to write their examinations. It therefore commits to restructuring the academic programme and examination timetable;

– recognises that outsourcing is an exploitative practice. The university commits to establishing its own internal commission, this is in addition to the President’s commission. This commission will investigate the effects of outsourcing services on the university, the cost structures associated with in-sourcing and possible alternative models;

– undertakes to find financial resources to support the children of all workers employed in currently outsourced services, provided that these children qualify for admission to the University;

– agrees there will be no disciplinary processes against students who were involved in legitimate forms of protest;

– commits to drawing up a workers’ charter;

–agrees, in principle, to make every effort to resolve any other outstanding issue that the students may want to address in good faith; and

– commits to call a General Assembly should the students agree to these measures.

“On the basis of this, the academic programme must resume on Tuesday, 27 October 2015. It is imperative that we do not lose the academic year and jeopardise the future potential careers of our students,” the institution said.

Habib was forced to sit and listen to the students after a Senate meeting which was supposed to deliberate on the ongoing protests and to decide on the resumption of the academic programme was disrupted by protesting students earlier.

The Senate is highest academic decision-making body of the university.

The students told Habib they wanted the university to commit to timelines when it came to the halting of outsourcing of staff and services.

Lengthy meetings were held on Saturday and Sunday by students who could not agree on how to proceed with the “fees must fall” campaign that started at their institution two weeks ago.

Most university campuses around the country had decided to continue with protests, despite an announcement by President Jacob Zuma on Friday to put a moratorium on 2016 fee hikes.

The students argued that only one of their demands – that fee hikes be scrapped – was agreed to following a march to the Union Buildings on Friday.

They are demanding free education for all and that universities stop the outsourcing of staff and services.

Wits was quiet on Monday without a single march taking place as students engaged in a series of lengthy meetings.