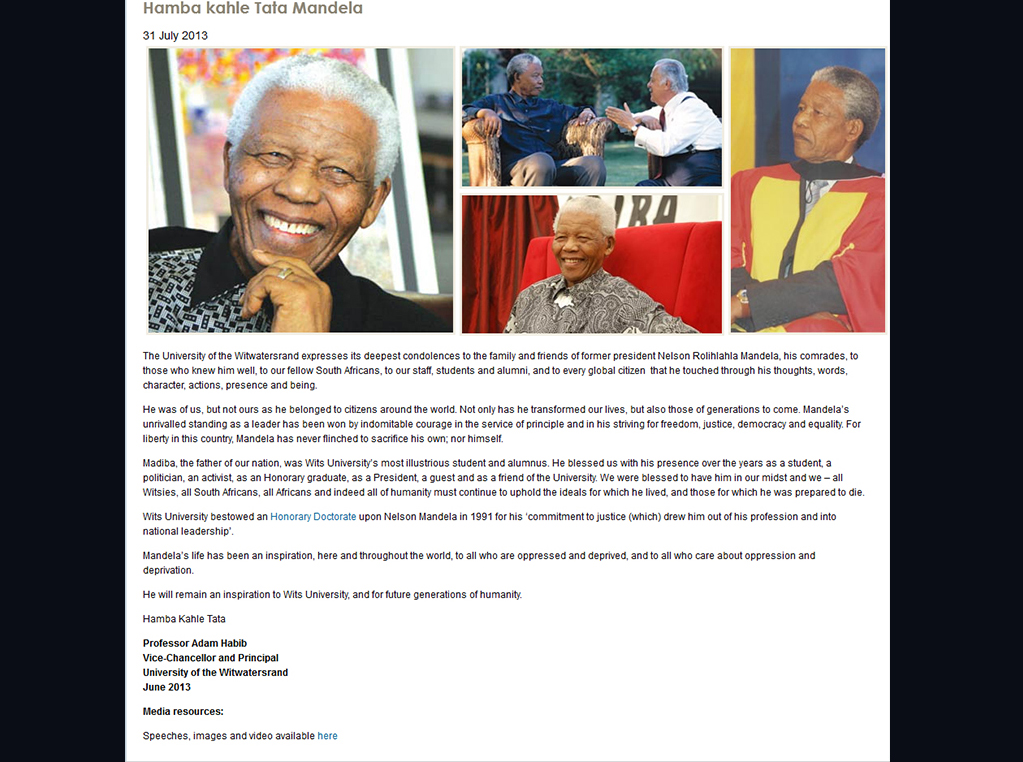 A screenshot of a message of condolence, which unintentionally appeared on the University of the Witwatersrands website on June 20, 2013, via what the university deems a 'Google technical glitch.'

Johannesburg - The University of Witwatersrand says it did not publish a Nelson Mandela obituary article.

The University said it had prepared a statement, which was hidden on its systems.

However, “a technical error made this available via a search function on Google,” it stated.

“At no stage did the university issue this statement or publish it on its website,” said spokesperson Kanina Foss.

The university also extended its sincerest apologies to the family, friends, fellow South Africans and global citizens for the obituary.

A Google link to the university’s website showed a post-dated message of condolence addressed to family and friends of Madiba titled Hamba kahle Tata Mandela.

The former president has been at the Heart Hospital in Pretoria for nearly two weeks recovering from a recurring lung infection. His family has reported that he&39;s doing well.

In the message dated 31 July 2013, the university “expresses its deepest condolences to the family and friends of former president Nelson Rolihlahla Mandela, his comrades, to those who knew him well, to our fellow South Africans, to our staff, students and alumni, and to every global citizen that he touched through his thoughts, words, character, actions, presence and being.”

It goes on to say, “He was of us, but not ours as he belonged to citizens around the world. Not only has he transformed our lives, but also those of generations to come. Mandela’s unrivalled standing as a leader has been won by indomitable courage in the service of principle and in his striving for freedom, justice, democracy and equality. For liberty in this country, Mandela has never flinched to sacrifice his own; nor himself.”

It adds, “Madiba, the father of our nation, was Wits University’s most illustrious student and alumnus. He blessed us with his presence over the years as a student, a politician, an activist, as an Honorary graduate, as a President, a guest and as a friend of the University.

"We were blessed to have him in our midst and we – all Witsies, all South Africans, all Africans and indeed all of humanity must continue to uphold the ideals for which he lived, and those for which he was prepared to die.”

The university also mentioned an Honorary Doctorate it bestowed on the elderly former president in 1991 “for his ‘commitment to justice [which] drew him out of his profession and into national leadership,” adding “Mandela’s life has been an inspiration, here and throughout the world, to all who are oppressed and deprived, and to all who care about oppression and deprivation. He will remain an inspiration to Wits University, and for future generations of humanity.”

The sign-off details reflected those of “Professor Adam Habib, Vice-Chancellor and Principal, University of Witwatersrand, June 2013”

The message has since been taken down from the website.

“The university regrets the mishap and will take all the necessary steps to get to the root of the technical error and to ensure that the responsible departments are held accountable for this incident,” said Foss.

It said a "technical error" was to blame for the mistake.