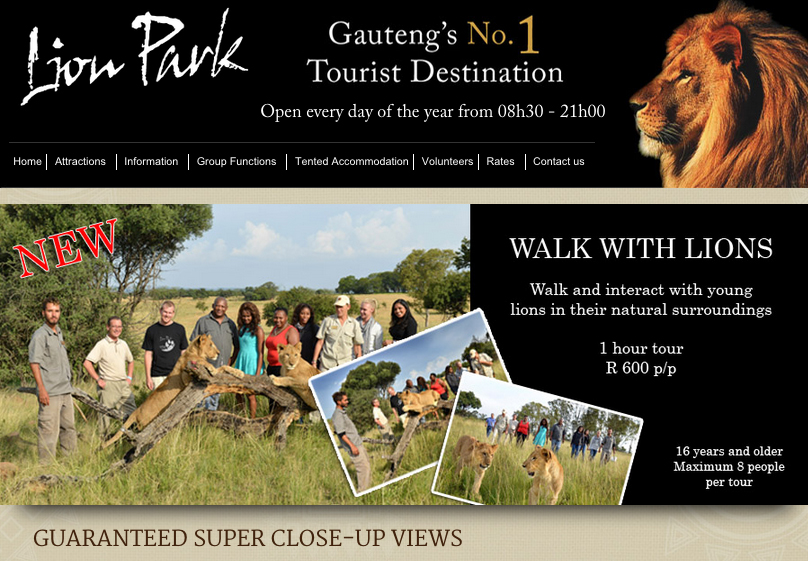 A screenshot from the Lion Park's website guaranteeing super close-up views of lions.

JOHANNESBURG - A woman has been killed in an attack by a lion at the Lion Park in the Lanseria/Honeydew area of Johannesburg.

Sources say another person was injured and the pair may have been driving with their car window open.

This is the third attack at the park in the past four months.

Scott Simpson, assistant operations manager at the Lion Park, said that details are still sketchy but he believes that a woman and a man were driving in the lion camp with windows open.

One of the lions jumped through the passenger window and bit the woman. The man was injured trying to push the lion off the woman.

"Our staff working at the top of the camp tried to get the lion away from the car. Ambulances were called immediately but it was too late," he said.

Simpson said visitors to the park are given plenty of warning not to leave their windows open.

"We make it so clear. We put signage up everywhere that people must keep their windows closed. We hand them a slip of paper when they enter the park, I really don’t understand why people think its okay to leave windows open," he said.

On 30 March this year. Australian Brendan Smith posted images on Facebook of a lion attacking him at the park. He admitted that he left his window open. A lion jumped through and attacked him.

Two days after that, a 13-year-old boy was attacked by a cheetah.

The US embassy in South Africa has commented on the lion attack.

We can confirm that a U.S. Citizens was killed at the Lion Park in Johannesburg yesterday.

The U.S. Embassy and Consulate General in Johannesburg are providing all possible consular services.

Out of respect for the privacy of the family, we will not be releasing the name or commenting any further.

Our hearts go out to the family and loved ones of the deceased in this sad incident.