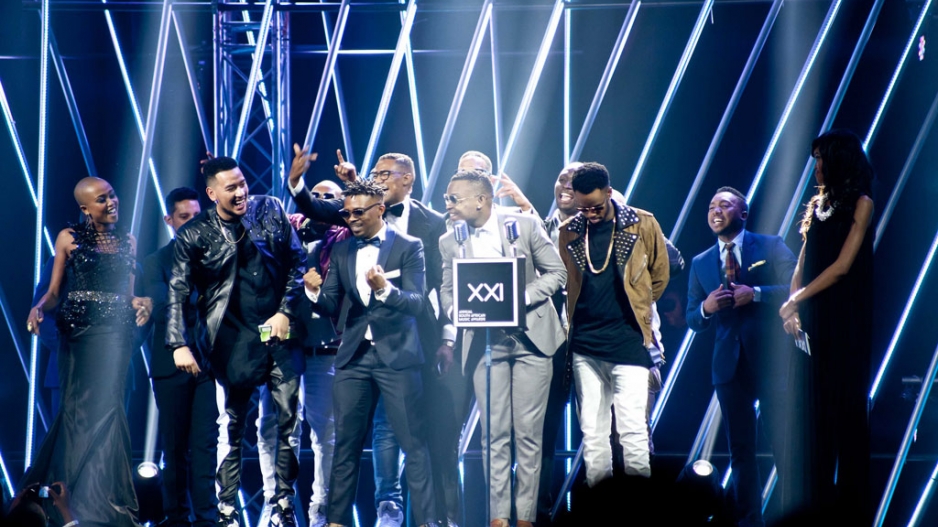 Some of the winners at the South African Music Awards (SAMAs) celebrate their victory on stage on Saturday, 18 April 2015.

PRETORIA - South African musicians are adversely affected by the spate of xenophobic attacks experienced in the country, the Creative and Cultural Industries of South Africa (CCIFSA) said on Wednesday.
“You will notice that some of our artists in the creative sector have actually felt the pinch of what has been happening,” CCIFSA president Tony Kgoroge told reporters in Pretoria.
“The victims are Kelly Khumalo and Brickz who were actually banned from performing in the United Kingdom.
Ringo Madlingozi, Big Nuz and Cassper Nyovest were supposed to perform in Zimbabwe and their performance was stopped.”
Kgoroge said the wave of xenophobic attacks, targeting mainly African immigrants, was bad for South Africa’s huge entertainment sector.
“It is also bad for us to market our artists internationally,” he said.
“We have to make sure that we interact with (other) African countries and artists, to build and come up with a campaign to stop xenophobia.”
Kgoroge was part of religious and cultural organisations, labour unions and business leaders who held a meeting with President Jacob Zuma at the Sefako Makgatho Presidential Guesthouse on Wednesday.
The meeting was also attended by several top government officials including Home Affairs Minister Malusi Gigaba, State Security Minister David Mahlobo, Minister in the Presidency Jeff Radebe and Basic Education Minister Angie Motshekga.
This week, Zuma is scheduled to meet leaders of organisations representing immigrants from the African continent. Representatives of Pakistan and Bangladesh are also scheduled to attend. That meeting has been rescheduled to Friday.
The presidency said Friday’s summit would seek to ensure “that the shameful attacks on foreigner nationals do not recur”.
Government deployed troops on Tuesday after seven people had been killed in xenophobic attacks.
-ANA