'You are not my mother,' Shivambu tells Mbete 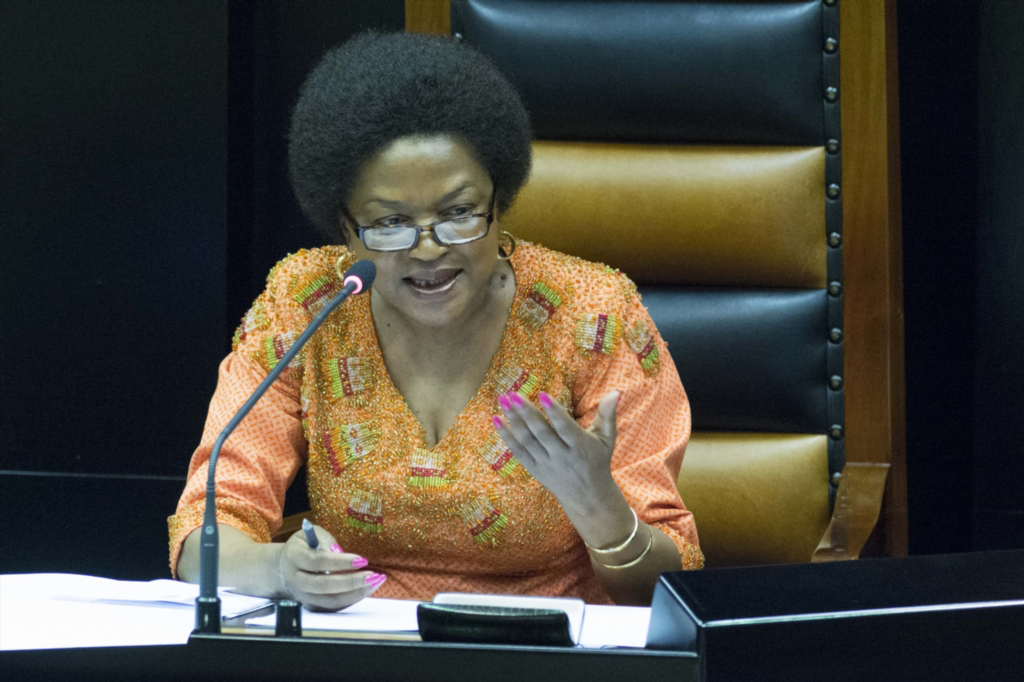 Speaker of Parliament Baleka Mbete during a debate on security upgrades at Jacob Zuma's Nkandla homestead on August 19, 2014 in Cape Town.

CAPE TOWN - Speaker Baleka Mbete was humbled in Parliament on Wednesday after she tried to school one of the MPs in cultural etiquette.
"You are not my mother. This is a professional relationship. Don&39;t bring culture here," EFF Member of Parliament Floyd Shivambu told Mbete.
The exchange occurred after Mbete had tried to reprimand Shivambu.
Shivambu had issued a veiled threat to President Jacob Zuma, who has come under for not appearing before the National Assembly.
&39;A matter of national importance&39;
The banter followed a testy meeting of the National Assembly programming committee on Wednesday.
The meeting discussed disciplinary action taken against MPs from the Economic Freedom Fighters.
A report which is likely to result in the suspension of  MPs from Parliament will be up for debate in the National Assembly on Thursday.
All parties agreed the disciplinary process of the EFF MPs was "unprecedented" and the issue was of "national importance".
&39;Is there something scary tomorrow?&39;
The report recommending the suspension of 12 EFF MPs, compiled by Parliament&39;s Powers and Privileges Committee, was initially on the order paper for consideration only, meaning a debate would not have happened.
But EFF and Democratic Alliance MPs made a strong push for a debate during the programming committee.
ANC Chief Whip Stone Sizani eventually agreed.
"It&39;s a matter of national importance. It must be debated," Sizani said.
However, Sizani wanted party whips to agree to suspend notices of motion and motions without notice, insisting that if these items were put on the order paper it would likely lead to a filibuster by EFF MPs.
The African Christian Democratic Party and the National Freedom Party agreed with Sizani.
"We must guard against reaching our homes at four o&39;clock in the morning," said NFP Chief Whip Nhlanhla Khubisa.
The committee finally agreed in principle that motions would be back on the order paper.
However, party whips would meet afterward to decide whether they would put a time limit on motions to prevent a filibuster.
EFF MP Godrich Gardee argued that there was nothing special about the report that would warrant a filibuster.
"Filibustering can also be done on any other days when there&39;s nothing scary," said Gardee.
Laughter erupted when National Assembly Speaker Baleka Mbete intervened, asking: "Is there something scary tomorrow?"
"Yes, that item number one of the ANC," Gardee replied, referring to the report which could see him and his colleagues suspended from Parliament.
The barrel of a gun
Shivambu also asked the Speaker for assurances that police would not be called into the National Assembly on Thursday in a repeat of the sitting on November 13 when they rushed into the chamber to remove an EFF MP who had called Zuma a thief.
"We don&39;t want to sit under the barrel of a gun," he said, and went on to ask whether the EFF would have to beef up their own security for the sitting.
DA parliamentary leader Mmusi Maimane also argued that Zuma should come to Thursday&39;s sitting to answer questions from MPs, saying again that the president was in breach of rules requiring him to do so every term.
But Mbete said the matter was out of her hands, as it had become the subject of negotiations -- now at a dead end -- between opposition parties and Deputy President Cyril Ramaphosa.
Mbete also made the point that Zuma&39;s last question session, on August 21, had ended prematurely because EFF MPs heckled the president in the incident that is likely to see their suspension on Thursday.
Gardee insisted that Zuma had no right to demand respectful treatment from the opposition as a pre-condition for coming to answer questions.
Heckling and shouting
"The president is creating a constitutional crisis in this country," Gardee said.
"Heckling and shouting is what is found in democracies throughout the world, he can&39;t say that he can&39;t be heckled when people feel &39;President, you are out of order here&39;."
"So he just wants to come here and read his speech and go like a pastor."
After finally agreeing on a debate on the report on the EFF, the party whips also agreed a snap debate on the Eskom crisis would also be included on the order paper because the recent power outages merited debate.
This would only happen after the Powers and Privileges Committee report is debated.
The report details the conviction of 20 EFF MPs on misconduct charges, and the recommended sanctions for their actions.
The committee recommended that Gardee, EFF leader Julius Malema, Shivambu, Mpho Ramakatsa, Khanyisile Litchfield-Tshabalala, and Mbuyiseni Ndlozi be suspended without pay for 30 days.
Another group of MPs, consisting of Elsabe Louw, Ngwanamakwetle Mashabela, Nthako Matiase, Hlengiwe Maxon, Magdalene Moonsamy, and Andile Mngxitama, who were found guilty on two charges each of contempt of Parliament, also face suspension for 14 days without remuneration.
It was recommended that the rest of the 20 MPs, who were found guilty of one charge each of contempt of Parliament, be ordered to submit a verbal apology to the House.
-Additional reporting by Sapa