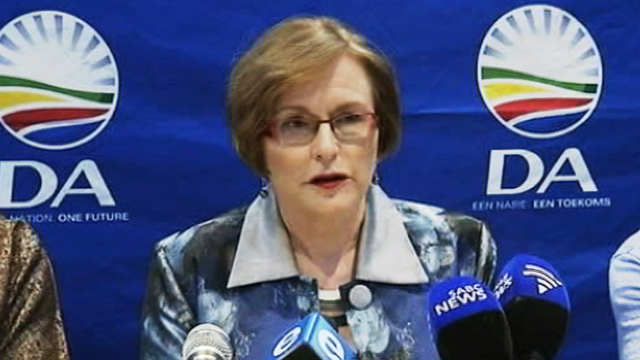 Western Cape, 30 November 2015 - The ANC in the Western Cape claims there are enough reasons to impeach Helen Zille, and get her removed from her position as premier.

Zille came under fire on Thursday over her controversial remarks that colonialism had brought positive effects as well.

Zille had earlier tweeted: “Getting onto an aeroplane now and won’t get onto the wi-fi so that I can cut off those who think EVERY aspect of colonial legacy was bad.

“For those claiming legacy of colonialism was only negative, think of our independent judiciary, transport infrastructure, piped water etc,” she wrote.

Zille quickly issued an unreserved apology for her tweet, saying: “I apologise unreservedly for a tweet that may have come across as a defence of colonialism. It was not.”

However, there were immediate calls for her head from the ANC and Cosatu who called her a “colonial apologist”

Maimane explained that the tweets may have violated the DA’s social media policy for public representatives and therefore, had to be referred to the DA’s disciplinary committee.

DA national spokesperson, Phumzile Van Damme, said in a statement: “Colonialism, like apartheid, was wrong. It oppressed millions of people and violated human rights in a cruel and inhumane way.”

Maimane said: “We received a number of complaints and I find [Zille’s tweet] indefensible.”

“The DA is party that is committed to redressing the wrongs of the past. We want to build a united South Africa – one nation, with one future,” added Van Damme.

Zille praises aboKing Leopold, but draws the line at Hitler doe. Your faux liberals who want to govern the country pic.twitter.com/Sdjhk4p3Nb

This article, on the effects of British colonialism on India, should be required reading for Zille et al: https://t.co/QSSXs9x5dr pic.twitter.com/jRrKpCg3FJ