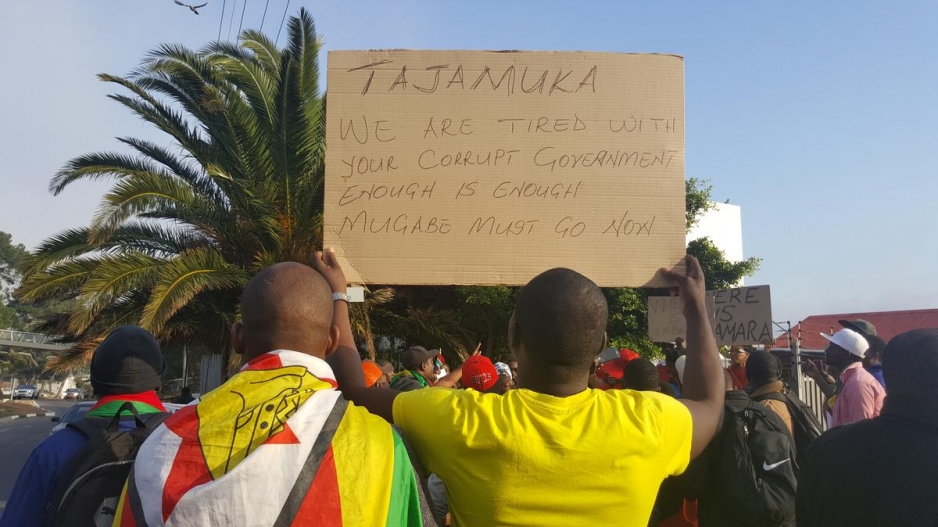 Tajamuka protesters and other Zimbabweans are calling for Mugabe and his administration to vacate office.

CAPE TOWN – Southern Africa’s continued silence about Zimbabwean President Robert Mugabe 36-year-rule and the growing unrest resulting from disillusionment with his government will result in spillover effects for neighbouring nations.

This is a caution from one of the representatives of the Tajamuka youth pressure group, which protested in Cape Town on Thursday.

“A problem in Southern Africa is a problem for all Southern African countries,” said the representative Isheunesu Chibi, speaking outside of the Zimbabwean consulate in Zonnebloem.

Chibi said Southern African nations have failed to learn from the 2010 Arab Spring in North Africa, something he predicts will happen if the dire situation in Zimbabwe worsens.

“This is a very fragile issue. It needs attention, as soon as possible.”

Chibi, a 32-year-old who is working in the hospitality industry in Cape Town, was forced to leave his home in Harare, Zimbabwe 13 years ago due to the dire economic situation. With eight high school distinctions, Chibi had to give up his dreams of pursuing a tertiary education, instead heading straight to work in South Africa.

“I lost all my time here, not willingly however,” said Chibi.

“But the situation has pushed me out of Zimbabwe, as it has pushed a lot of people out of the country.”

Chibi, along with fellow Tajamuka members and other Zimbabwean immigrants, were joining protesters around the world who were calling for 92-year-old Mugabe and his administration to step down.

It also follows the arrest, court appearance, and subsequent release of Pastor Evan Mawarire, a leading figure in the ThisFlag campaign behind last week’s stayaway.

“We want to go back to a peaceful Zimbabwe, a free Zimbabwe. And this is why we are coming to this consulate to give our message,” said Chibi.

After more than three decades of Mugabe’s rule, Chibi explained why Zimbabweans were, in 2016, standing up to the regime.

“Zimbabweans are peaceful people, we are not fighting people by nature,” he said.

But, said Chibi, silence could only do so much.

“They have tried to keep quiet, to solve everything peacefully,” he said, “But you know, people they get tired.”

Chibi said that was why Zimbabweans were no longer scared of the government, of police, and of being arrested. He said they could no longer tolerate allegedly rigged elections, abductions, and political intolerance.

“Everyone is ready for a war in their hearts,” he said.