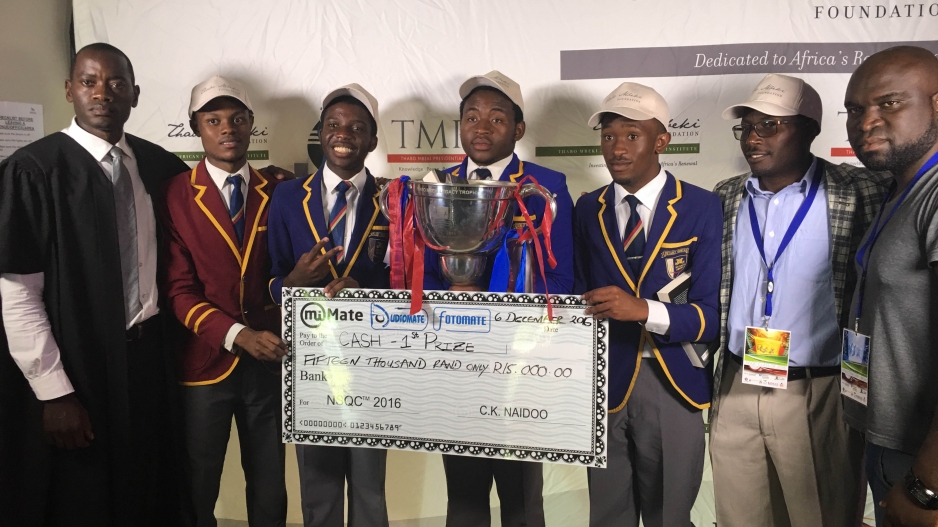 Students from Marist Brothers College in Zimbabwe, holding their winners cheque, pose with the NSQC Quiz Master and Producer.

JOHANNESBURG – Students from the Marist Brothers College in Zimbabwe won the National School Quiz Championship at the Pearson Institute of Higher Education in Midrand.

The National School Quiz Championship (NSQC) is a series of televised  quizzes that test high school students' knowledge of science, maths, African facts, history and literature, as well as their general knowledge.

The 23 schools battled it out for question after question on stage in the five-day tournament, competing for the Thabo Mbeki NSQC Legacy Trophy and for Pearson scholarships.

The Zimbabwean boys tied with students from Rand Private College in the finals and had to go through five sudden-death rounds for a winner to be declared.

The Marist Brothers team won after correctly answering  which the oldest university in Africa was.

When asked by eNCA whether they had thought they would win from the very beginning. they said they had been hopeful.

“The nerves were really high, but we always through the completion kept our composure and we believed that our composure would make us go through.” said team captain Takudzwa Gaitano.

Winners of #NSQC2016 from Nyanga High Marist what the win means to them pic.twitter.com/aBwqtvdub7

Their proud teacher, Committee Nyamagwada,  said they were dedicated and serious.

The group of four boys won the first ever Thabo Mbeki Legacy Trophy, given by the Thabo Mbeki Foundation, and R15,000.They each won scholarships to study at the Pearson Institute.

They will also attend the NSQC World Series, which will be hosted in Johannesburg next year.

The Rand Private College, which came second, was given bursaries amounting to R1-million.

The tournament was facilitated by a no-nonsense quiz master dressed in a graduation gown.

.@IAMNSQC final round for group A in the quater finals day 4 @pearsoninstitut and it's very intense as the Quiz Master grills them pic.twitter.com/Aieg8Mhxff

The stern character, who is also one of the founders of NSQC, said that the key to winning such a competition was the ability to read and be prepared.

“It’s not just enough to be book smart, you also have to know what’s going on. Do you listen to the news? Do you read the newspapers, and if so, can you express yourself on stage?” he said.

Producer Ian P Venganai, who co-founded the NSQC in 2013, said the aim of the tournament was to bring the smartest kids from around the world to interact and compete with each other in order to make education fun for them.

“Our aim was to create the world’s greatest academic TV sport. We are trying to bring the nerds to the commercial platform, making the smart kids the cool kids again.”

Vusi Maqubela, office manager at the Thabo Mbeko Foundation, said he believes the importance of such a tournament was that it allowed students to gain knowledge about Africa.

The NSQC competition will be broadcast on Loveworld SAT, and Mindset Learn on DStv.