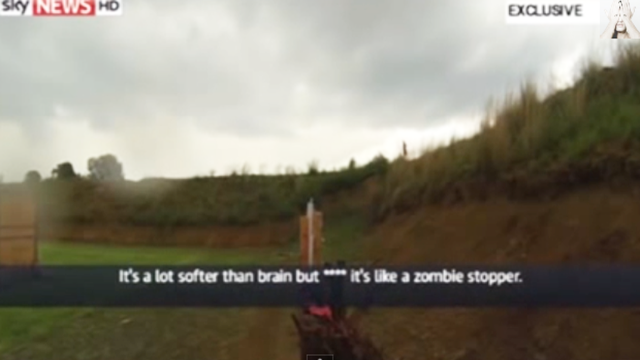 PRETORIA - “Oscar Pistorius, as you have never seen him before….” is how the Sky News video of Pistorius’s antics on a shooting range screened began when it was screened in the North Gauteng High Court this morning during the Paralympian’s murder trial.

The footage shows Pistorius firing his pistol at a watermelon. As the melon explodes into bits, a loud, raucous guffaw is heard.

Pistorius then comments: “It’s a lot softer than brain, but **** it’s like a zombie stopper.”

On viewing the footage Pistorius said he felt sad and embarrassed, but remembered the filmed incident.

He remembered saying “those words” but said the laughter was not his.

Nel said the bullet that “exploded” the watermelon is “exactly what you did to Reeva’s head”.

A photograph of Steenkamp’s smashed skull, bloodied with tissue spread across her matted hair, was shown on screens around the court.

“Look at it. Take responsibility for what you did. I know you don’t want to see this, but look at it, “ Nel said as a tearful Pistorius turned away from the picture.

Steenkamp’s mother June bowed her head as the graphic images were shown and Pistorius broke down weeping.

Nel then asked Judge Thokozile Masipa for an adjournment, acknowledging that Pistorius was too distraught to continue.