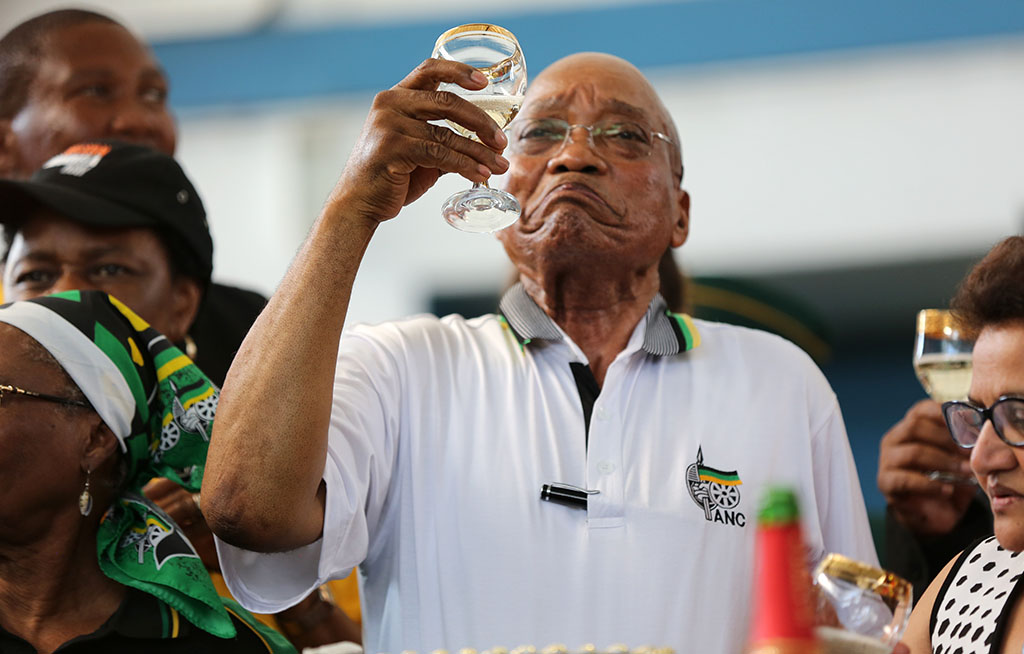 President Jacob Zuma raises his glass after cutting a cake in celebration of the ruling party's 103rd birthday on 8 January 2015.

The crowd cheered as his arrival was announced. Zuma was flanked by ANC secretary general Gwede Mantashe.

Greeting the supporters, Zuma walked around the stadium waving at the cheering crowd.

Earlier, the Cape Minstrels entertained thousands of ANC supporters who were gathered for the 103rd anniversary of the party. The crowd went wild and many grabbed their cellphones to film the colourful parade of minstrels, who danced, blew their trumpets and waved.

The stadium was only 70 percent full by 11am, with many still queuing at the turnstiles outside. Party spokesman Keith Khoza attributed the empty seats to logistics although the event was scheduled for 10.15am.

"We will fill it. There are just delays with transport and security but people are still coming in," Khoza said.

He said ANC supporters were delayed because of problems with trains and were eventually brought into the stadium by bus.

One of those who turned out to celebrate the anniversary was Busisiwe Sibali.

She said she had come from Coega in the Eastern Cape, where she is a ward councillor for the party.

Security was tight as hundreds of city law enforcement officers, members of the SAPS, private security and ANC marshals maintained law and order.

Bags were searched at access control points, slowing down the entry of people into the stadium. -- Additional reporting by eNCA

Hahaha. Death by this guy asking the spirit of Jan Van Riebeek to voetsek before he can pray! ANC103 pic.twitter.com/kXJSiPbFIp

ANC103 The official programme has now started. Watch it live on @DStv 403 and here >> http://t.co/yvU3LOqkbx