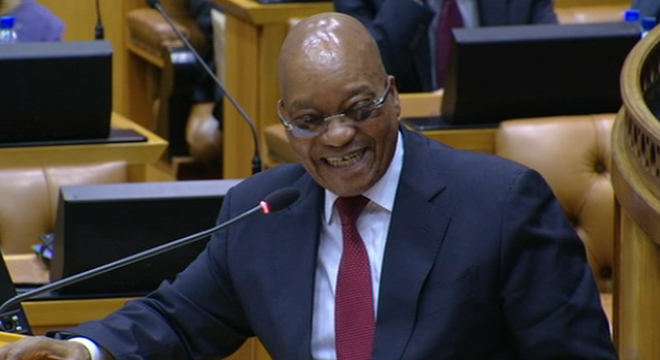 Cape Town, 19 November 2015 - President Jacob Zuma was unable to keep his laughter in check as he answered questions in Parliament on Thursday.

JOHANNESBURG – President Jacob Zuma was blasted on Thursday in Parliament for laughing during the year&39;s final question and answer session.

Members of the opposition said Zuma&39;s laughter during the sitting was not only distasteful, but that he was mocking the nation&39;s problems.

The session was supposed to be an opportunity for Zuma to address some of the country&39;s most pressing issues, but the president couldn&39;t suppress his laughter while he tackled MPs&39; questions.

Members of the public who watched the proceedings on television were not amused though and voiced their frustrations on social media.

Zuma was slammed for being arrogant and nonchalant about the country&39;s problems.

For interviews and analysis, watch the videos above.

Sad to see Zuma laughing, whilst many in SA are suffering! ZumaQandA What is the joke? pic.twitter.com/cXouFjLaKm

When Zuma and ANC MP&39;s heard that today will be the last ZumaQandA of the year and @Julius_S_Malema wont be there pic.twitter.com/1qkTEe3Gyh

When I saw the trend zumaqanda I read it as zumaganda, like propaganda but with Zuma.

ZumaQandA later today in parly Not to be mistaken with the brand AmaQanda kaMsholozi of eggs from the chicken run pic.twitter.com/qUXkDwkBcm

Eish, the perils of being multilingual! Thought zumaqanda was Zuma egg! As in I will pay 0 for nkandla.

Watching Zuma in parliment,I&39;m now convinced there is a difference between Answering Questions & Responding to Questions! ZumaQandA

He is talking about the water crisis but laughs through out? I don&39;t understand ZumaQandA pic.twitter.com/0RKiSCencf