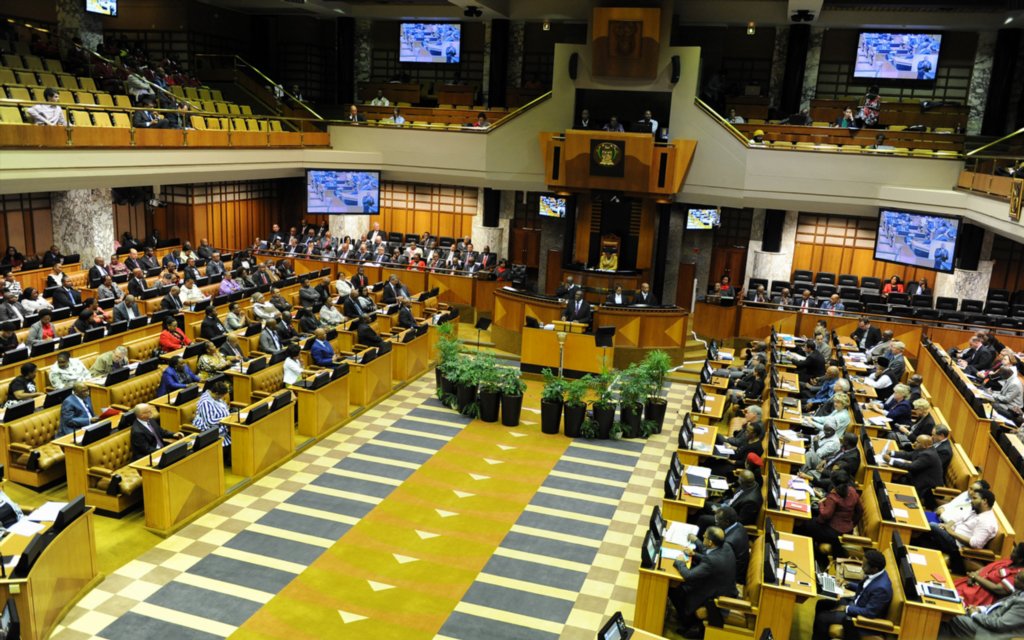 FILE: Members of Parliament listen to the Minister of Finance Nhlanhla Nene as he delivers his mid-term Budget statement on October 22, 2014 at Parliament in Cape Town.

PARLIAMENT – It was another afternoon of entertainment from the National Assembly on Thursday when President Jacob Zuma answered questions from opposition parties.

Speaker of Parliament Baleka Mbete kept her cool as members of the EFF constantly interrupted on a point of order while other MPs were talking, in defiance of house rules.

Zuma was asked questions about the recent Brics summit and the AU summit amongst others. Discussions were heated as opposition parties hurled insults and accusations at each other.

Below is a list of the top five moments from the session.

1. EFF: Let’s go outside and moer each other

EFF MP Natasha Louw rose on a point of order and said she would not tolerate a white man speaking to her in a certain manner. It&39;s understood she was complaining about comments made by Freedom Front Plus MP Pieter Groenewald.

“How dare he speak to us like that? How dare he? He’s standing here by the door swearing at us,” she said.

“If he wants to moer us let’s go outside and moer each other,” she said.

2. Zuma: The AU invited Al-Bashir to SA, not the government

President Jacob Zuma was criticised for allowing President of Sudan Omar al-Bashir to leave South Africa without being arrested during the AU summit in June.

The International Criminal Court (ICC) for war crimes and crimes against humanity has indicted al-Bashir over atrocities committed in the Darfur conflict.

DA Leader Mmusi Maimane reminded Zuma of a 2010 incident when he said in Parliament that South Africa would arrest al-Bashir if he visited the country.

“What has changed since 2010 that recently in contravention of a high court order your government assisted him in allowing to leave without being arrested?” said Maimane.

Zuma went from answering a question in English to speaking in isiZulu. He pointed his finger and said, “You’re talking while I’m trying to answer a question.”

EFF MP Mbuyiseni Ndlozi said the speaker of Parliament Baleka Mbete should call the President to order for asking the gallery to keep quiet.

“He (Zuma) must respect the rules of the house and address us through you (Speaker),” said Ndlozi.

Another MP raised a point of order saying that the gallery were making a noise and participating in proceedings.

EFF MP Godrich Gardee interrupted her point and said, “That one is out of order, if she doesn&39;t have members in the gallery she must shut up and sit down.”

Things got heated between Julius Malema and Mmusi Maimane.

The DA leader accused the EFF of rekindling its alliance with the ANC.

“I see the old alliance between the EFF and the ANC is back together and strong,” said Maimane.

Julius Malema didn&39;t take too kindly to this and demanded Maimane withdraw his comment.

5. EFF: When are you going to pay back the money?

The third largest party in South Africa again asked Zuma when he was going to comply with Public Protector Thuli Madonsela’s findings that he should pay back part of the money spent on non-security related upgrades to his private homestead in Nkandla, KwaZulu-Natal.

While we have heard this from the EFF many times before, the Malema announced after the session that they have filed papers at the Constitutional Court to get Zuma to comply with Madonsela’s recommendations.

Malema said the application was launched on Thursday and that Zuma and Parliament have received court papers.

“We are waiting for a date from the Constitutional Court. We have a case number and we want the court to compel the president to implement the remedial actions of the Public Protector, including him paying something, particularly for the non-security features at Nkandla,” said Malema.

Below are some of the funny reactions to the discussion shared on social media:

"If it shows people ate money, it will be brought to light."- Zuma&39;s closing words on Nkandla ZumaQandA pic.twitter.com/4q4V26H3e6

And who is this lady!? She&39;s strong. Who sleeps through such a ruckus? ZumaQandA pic.twitter.com/ahuHcxjNNn

Mistress Ginger trending during today’s ZumaQandA is by far the high point of my day. pic.twitter.com/3RG5mWLIvZ