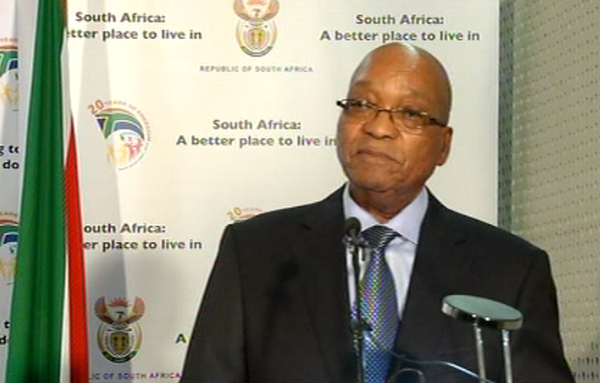 JOHANNESBURG - President Jacob Zuma started off his final term in office with a major Cabinet shake-up on Sunday.

Zuma shuffled around a number of key ministries, removing some controversial figures or placing them in other portfolios. See the full list below.

Some of the major announcements include Nkosinathi Nhleko who replaces Nathi Mthethwa as police minister. Mthethwa has been moved to the ministry of arts and culture.

Pravin Gordhan moves from finance to local government and traditional affairs, although his departure will not surprise many. Gordhan, who had hinted before that he was considering stepping aside, will be replaced by his deputy Nhlanhla Nene.

Tina Joemat-Pettersson moves from agriculture and fisheries to the energy post. She has been replaced by Senzeni Jokwana, former NUM president and new MP.

Susan Shabangu, who has come under fire from some quarters for her handling of the mining portfolio, will head up the ministry of women in the presidency. The former mining minister is replaced by party veteran Ngoako Ramatlhodi.

Marthinus van Schalkwyk leaves Cabinet and is replaced by Derek Hanekom as Minister of Tourism.

A new face and position in Cabinet is Lindiwe Zulu as minister of small business development.

Ministers who retain their posts from the previous administration include:

The president also announced the creation of some new ministries.

"We have established a ministry of telecommunications and postal services," Zuma said while making his Cabinet announcement.

"Our country has a fast growing telecommunications sector which in 2012 was estimated at being worth R180 billion."

The aim of the new ministry was to get more value out of the telecommunications sector, he said.

The communications department had been reconfigured to include more functions.

"We have established a new communications ministry which will be responsible for overarching communication policy and strategy, information dissemination and publicity, as well as the branding of the country abroad," Zuma announced.

"This ministry will be formed out of the following components: the Independent Communications Authority of South Africa, the SA Broadcasting Corporation, Government Communication and Information Systems, Brand SA and the Media Development and Diversity Agency."

The National Planning Commission and the ministry of performance, monitoring and evaluation will be merged.

"This ministry will also continue to be responsible for youth development."

Zuma promised to create 5 million jobs and now we can see that he started that process within his own Cabinet! ZumaCabinet

Surprised to see Nkandla has not received it&39;s own Minister. ZumaCabinet

20 men, 15 women as full Ministers in Cabinet. Susan Shabangu as Minister for Women is interesting.

"@ferialhaffajee: So, the only woman premier the ANC retained is the KFC lady? She got wings..."

Gigaba failed at Public Enterprises and has been shifted to go issue passports at Home Affairs.

cabinet2014 so @ButiManamela goes to the Union Buildings while Bheki Cele will try to make fishes sexy! Well done...

Bheki Cele to be a deputy fisherman. His tirade about Deputy Jesus got him here.

Well, the cat in that hat is sure going to fix the fisheries mess.

We don&39;t know what Mbaks has done for Sports but the people are still waiting for Beyonce.

Kortbroek did well in Tourism. He had to make way for further expansion of political patronage.

Fikile Mbalula is still our Minister of Sport. Because Jay Z loves him as much as he loves Beyonce. newcabinet TheFig

Pravin Gordhan&39;s just been put in charge of how provinces and local government works (or does not). He&39;s been studying it for years.

And, not that arts is not vital, but that&39;s a step down for Nathi Mthethwa. A smack down.

Dear Mr. President, A move from minister of police to art and culture is rather worrying. newcabinet

Kgalema has been moved from the cabinet down into the basement. newcabinet TheFig