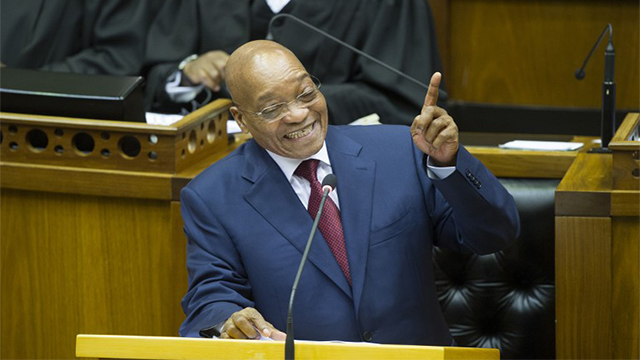 South African president, Jacob Zuma, continues to deliver the State of the Nation address in Cape Town on February 12, 2015.

Watch the full recording and action from the day in Parliament.

PARLIAMENT – The African National Congress (ANC) on Tuesday voted down an opposition motion to impeach President Jacob Zuma for flouting the Constitution in his handling of the Nkandla scandal, sticking doggedly to a narrative that he never acted in bad faith.

The motion, brought by the Democratic Alliance (DA) and fiercely backed by the Economic Freedom Fighters (EFF) and most small opposition parties, drew 143 votes in favour and 233 against.

“You have voted against the people of South Africa… You are traitors all,” shouted EFF leader Julius Malema as he led his party out of the National Assembly after the vote.

Earlier Malema had singled out Deputy President Cyril Ramaphosa and Finance Minister Pravin Gordhan as he implored senior ruling party figures to back the motion and push Zuma out of office in the wake of last week’s Constitutional Court ruling that he had failed to uphold the supreme law by long defying the Public Protector’s findings on Nkandla.

"We want to see Mr Ramaphosa, Mr Gordhan, Mr Jonas, the darlings of anti-corruption. Whether they will vote for this corruption." - Malema

“We want to see Mr Ramaphosa, Minister Pravin, Minister Jonas, the darling of anti-corruption, if you are going to vote for this corruption against the constitution,” Malema said in the National Assembly, after reminding Ramaphosa that he was seen as one of the fathers of the Constitution.

“We need another Ben Turok to vote against the mob,” he added, referring to the former MP’s stance against the Protection of State Information Bill.

“Stop thinking for your stomach, vote with your brains.”

Speaking just before Malema, Deputy Finance Justice John Jeffery had told MPs that the Constitutional Court had not found Zuma guilty of a gross violation of the Constitution and that the president had “never acted with mala fides” because until the ruling, it had been unclear whether the Public Protector’s directives had binding force.

Malema cautioned Jeffery that he was “trying to second guess what the Constitutional Court said”.

There was unfortunate precedent for this in the very case that served before the court, he said, in that opposition parties took legal action because the president and the National Assembly had second-guessed Madonsela.

Democratic Alliance leader Mmusi Maimane earlier opened the debate by attacking ANC MPs for seeking to paint the landmark ruling as insignificant and for their staunch support of the beleaguered Zuma.

"Today will single once and for all that the ANC has lost its way, and there&39;s absolutely no way back" - Mmusi Maimane

“They said the president was badly advised. They said the he was always going to comply with the Public Protector’s report. Basically they said it’s not a big deal.”

“Today the anger in our country remains palpable. The people of the country don’t like being taken for fools and that’s what President Zuma and Gwede Mantashe did on Friday night,” Maimane said, referring to President Jacob Zuma’s apology on national television on Friday night, and the ANC’s decision to accept that apology.

Maimane went as far as calling Zuma a cancerous tumour.

“Today, it will be recorded that ANC members of Parliament chose to defend a crooked, broken president instead of the Constitution and the rule of law. Today will signal once and for all that the ANC has lost its way and there’s absolutely no way back,” Maimane said to loud howling from ruling party benches.

“Corruption has infected the entire party like a cancer. While our attention today focuses on a large and malignant tumour, we know that under the surface, the disease has replicated itself in every cell.”

Maimane’s motion found favour with smaller opposition parties, some of whom called for electoral reform.

United Democratic Movement leader Bantu Holomisa wanted citizens to put pressure on Zuma to resign, failing which they should see to it that he’s immediately charged for violating the Constitution.

“President Zuma’s unlawful actions have sunk the executive, the National Assembly, the nation and his political party and put the country at a crossroads,” said Holomisa.

He also called for Parliament to be immediately dissolved and for general elections to be held within the next six to 18 months.

Inkatha Freedom Party MP Narend Singh, like others, called on ANC MPs to vote with their conscience.

“Saying no to this motion would not only be morally and ethically unconscienable but would also be a violation of your sacrosanct oath of office…,” said Singh.

“Today is not about South Africans against the ANC. It’s about responding to the supremacy of the Constitution and the rule of law. This is about saying to 11 Constitutional Court judges thank you for applying your minds and leading our nation.”

National Freedom Party chief whip Nhlanhla Khubisa suggested the president be directly elected by the country’s citizens, instead of parties deciding who the president will be.

“We deserve a president who puts South Africa first, not one who puts his political party first. Perhaps the time has come to take a serious look at the way our country’s president is elected,” said Khubisa.

Freedom Front Plus leader Pieter Mulder said Zuma should have suffered the same fate as his predecessor Thabo Mbeki, who was recalled from office in 2008, as the former president’s “mistakes were 10 times less serious than Zuma”.

“Sir, if ANC members once again ignore the facts of the last week….take my word for it, history will in a couple of years from now judge them very harshly and negatively.”

Congress of the People (Cope) leader Mosiuoa Lekota called on Parliament and its members not to be complicit in Zuma’s disregard of the Constitution.

“We pay too much. We paid with the best years of our lives in the prisons… we will not allow a mob of men and women who have no regard for the Constitution to play games with the future of our children and grandchildren.”

ANC MP Mmamoloko Kubayi closed the debate by suggesting the bid to impeach Zuma, launched immediately after the Constitutional Court ruling, was a misplaced imperialist plot and said of Zuma: “He has humbled himself before the nation, he has apologised.”

That position was endorsed by the ANC’s National Working Committee on Monday, on the eve of the debate, after Zuma in a televised address at the weekend said he would respect the court ruling.

EFF MP Mbuyiseni Ndlozi rose as Kubayi finished speaking, and asked: “Is that the best sweep you can come up with? Oh God, it was terrible.”