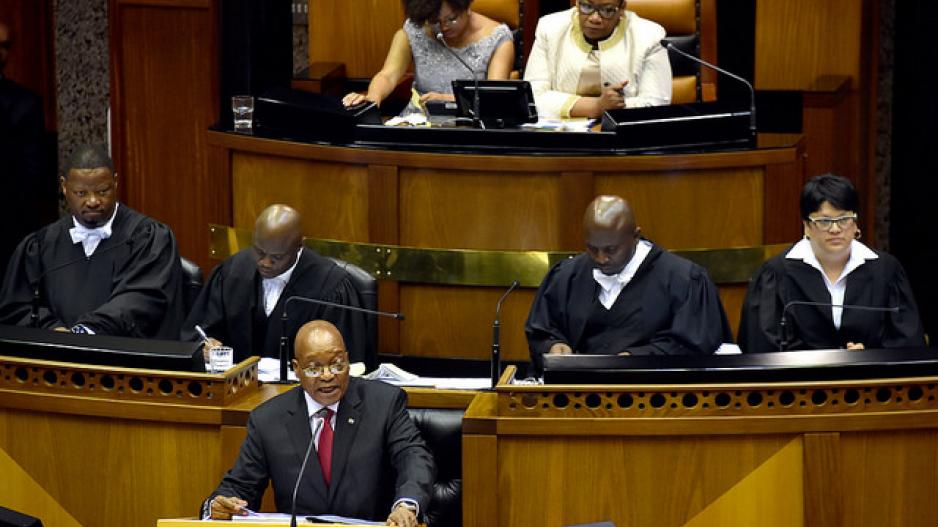 PARLIAMENT – A processes to amend the Competition Act is to start this year so the government can deal with market concentration, which is crowding out small businesses, President Jacob Zuma said on Thursday.

“Two key challenges we face are the high levels of concentration in the economy as well as the collusion and cartels, which squeeze out small players and hamper the entry of young entrepreneurs and black industrialists,” Zuma said while delivering his State of the Nation Address (SONA).

Zuma said while much had been done to deal with cartel behaviour, including the criminalisation of collusion – which carries a 10-year jail sentence – there were still sectors where a small group of people control led most of the market.

“During this yea, the Department of Economic Development will bring legislation to cabinet that will seek to amend the Competition Act,” he said.

“It will,among others, address the need to have a more inclusive economy and to deconcentrate the high levels of ownership and control we see in many sectors. We will then table the legislation for consideration by Parliament.”

Transformation in the workplace remains slow

Zuma said it was now time for black people to begin owning and playing a meaningful role in the country’s big industries instead of benefiting from empowerment schemes.

“Radical economic transformation should move beyond share economic schemes only. We would like to see black people involved directly in business, owning factories. The development of the black industrialists programme is thus critical,” Zuma said.

“Only 10 percent of the top 100 companies on the JSE are black-owned. The pace of transformation in the workplace remains slow.”

Zuma said the government was trying to quicken the pace of transformation of the economy through various programmes aimed at benefiting small, micro, and medium enterprises (SMMEs), especially black-owned and female-owned enterprises.

WATCH: DA walks out amid violence and obscenities #Sona2017

He said the government was actively involved in the R7-trillion property sector, adding that this year it would address increasing delays and backlogs in issuing of title deeds.

Aalso this year, the Department of Public Works would invest R100-million in critical programmes to modernise harbours and continue generating revenue from letting state-owned harbours and coastline properties, which would benefit black-owned SMMEs.

He said the government would also continue to pursue policies that seek to broaden the participation of black people and SMMEs, including those owned by women and the youth, in the information and communication technologies sector.

Zuma set out the transfer of more land to black South Africans as another key priority.

“We will not achieve true reconciliation until the land issue is resolved,” Zuma said in his address, after EFF MPs were dragged out of the National Assembly in the worst violence seen since the party began challenging his legitimacy.

He urged beneficiaries to retain land instead of opting for financial compensation, saying it was regrettable that black involvement in farming had declined sharply last year, with their retreat from the land conceivably hastened by the drought afflicting the country.

“We appeal to land claimants to accept land instead of financial compensation. This is very important,” he stressed.

“If you accept finance, you use it in short time, it is gone. It is important that you remain with the land, not the money.”

He added that perhaps it was a failure when the post-democratic government had initiated land reform to give claimants the option of compensation.

Zuma added that he had referred the Expropriation Bill, passed by the National Assembly last year, back to Parliament as it would not pass constitutional muster.

“This is due to inadequate public participation during its processing. We trust that Parliament will be able to move with speed in meeting the requirements so that the law can be finalised to effect transformation.