2018 Cape Town Cycle Tour will go ahead despite water crisis 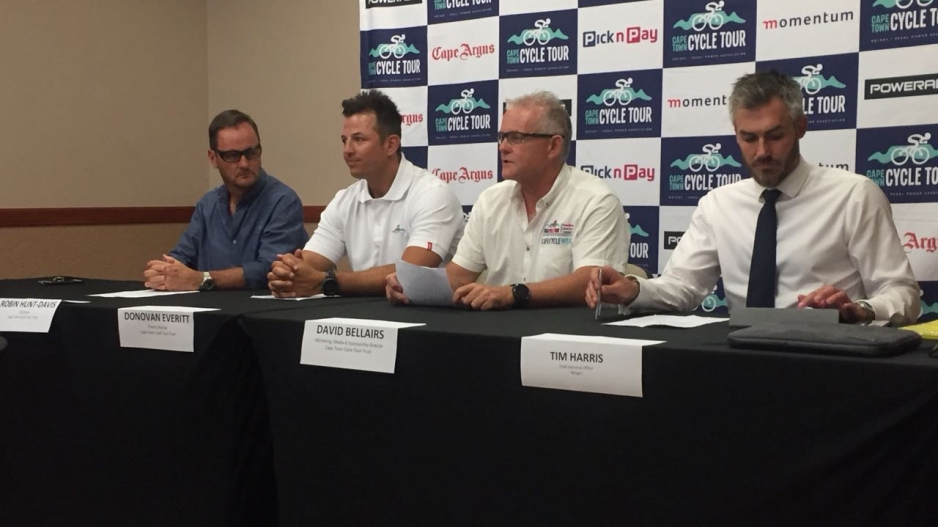 CAPE TOWN - The 2018 Cape Town Cycle Tour will go ahead despite the deepening water crisis gripping the city, tour organisers announced on Monday.

At a press conference, tour organisers stressed that the iconic sporting event will go ahead on 11 March, with a range of interventions to minimise the impact on the city&39;s water resources by the 35,000 participants.

Day Zero in Cape Town - when the taps formally run dry in homes - has been set for April 12 and there have been major concerns as to whether the Cycle Tour will be able to take place this year.

Cape Town Cycle Tour Director David Bellairs said the decision to proceed with the event was taken after careful consideration and taking into account that the Cycle Tour has a huge positive economic effect on the city, as well as spin-offs in terms of community upliftment programmes and charity initiatives.

"Over R500-million flows into the Western Cape economy during the week of the Cycle Tour," Bellairs said at a press conference in Cape Town on Monday.

"For the last decade, the Cycle Tour has been presented with a variety of challenges - from scorching temperatures exceeding 40 degrees Celsius, to extensive fires raging across the South Peninsula and, last year, winds in excess of 100km/h. This is our year of water - or rather, no water. We have had to reassess the way we do things and seriously consider whether the Cycle Tour should go ahead under the current conditions. We have spent an enormous amount of time considering our options. The decision has not been an easy one to make.

"On the one hand we have the needs of the charities we support and the stimulation provided to a Western Cape economy reeling under the effects of the drought. On the other, we are well aware of the very real concerns of the residents of the City of Cape Town, who make up the majority of our riders, the volunteers who help us stage the event, and the incredible supporters who make the event the special day that it is.

"We have been urgently seeking a way forward that will help us continue to support our beneficiaries, while acknowledging and offsetting the event’s water footprint."

He said it was the organisers&39; intention that the 2018 Cape Town Cycle Tour event day will draw zero litres of drinking water from the municipal supply.

"Eliminating the event’s reliance on municipal drinking water will be achieved through a variety of strategies," he said.

"These include bringing water in from upcountry for drinking and ice on the route, and using locally-produced desalinated water for all cleansing purposes. Water stations along the route will be reduced to the 14 essential from a medical point of view."

Bellairs added that the majority of Cape Town Cycle Tour participants are resident in Cape Town and surrounds.

"Approximately 15,000 riders participate in Cycle Tour from outside the borders of the Western Cape, including international entrants. As we have their details on our system, we are able to communicate directly with them to ensure they understand the severity of the drought situation in Cape Town," Bellairs said.

"Those travelling by road to the Cape will be encouraged to bring sufficient drinking water with them for their own daily consumption."

Bellairs said the water shortage was beyond a crisis and in fact, should be declared a disaster.

"Even if we manage to avoid Day Zero, the water shortage is going to have – and is already having – a significant impact on the economy, not just of Cape Town, but the economy of the entire Western Cape and South Africa as a whole," he said.

"The effects will be felt for a number of years, even if we do receive good rains this winter," he added. "So the question is, do we take away the revenue generated by the Cape Town Cycle Tour as well?

"We believe we have arrived at a solution that achieves the balancing act we were hoping for – one that takes cognisance of our fellow Capetonians’ concerns, while ensuring that we are still able to hold the event in order to support the charities that rely on the Cycle Tour and to boost the economy of the City of Cape Town at this time of need.

"After a great deal of thought, and discussion with all stake holders, the Cape Town Cycle Tour Trust agreed that in addition to taking the Tour off the municipal grid, it will offset the water footprint of the estimated 15,000 participants from beyond the Western Cape."

"As a result, we can confirm that the 2018 Cape Town Cycle Tour will go ahead."