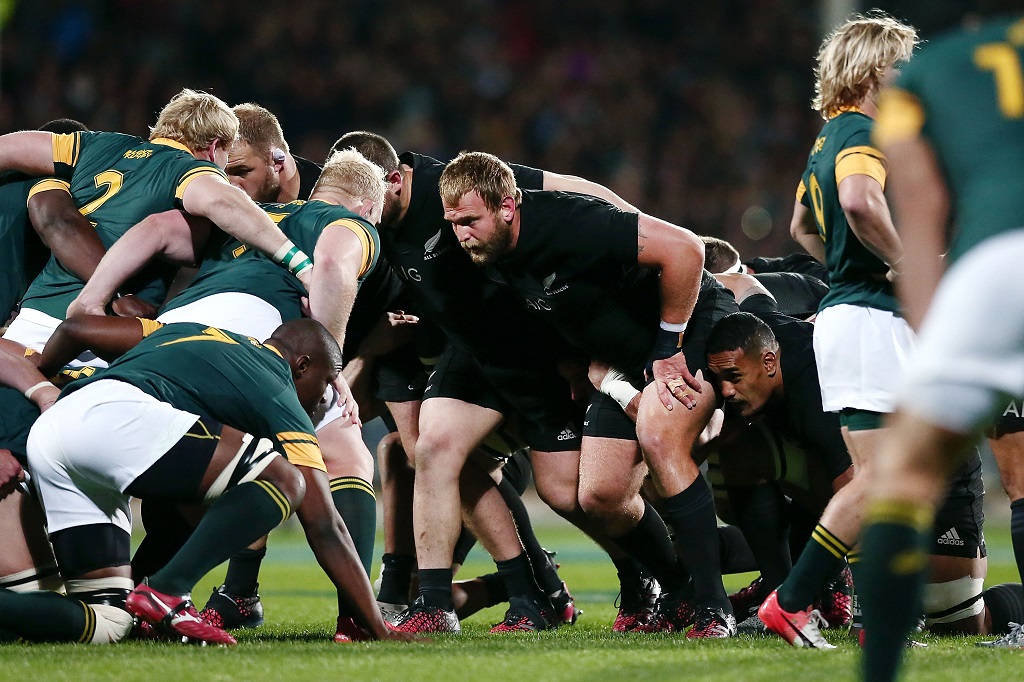 File: Joe Moody of New Zealand packs down a scrum during the Rugby Championship match between the All Blacks and the Springboks at AMI Stadium on September 17, 2016 in Christchurch, New Zealand

TOKYO, Japan - Two-time defending champions New Zealand face the toughest of starts to their Rugby World Cup campaign when they play South Africa on a heavyweight day two at the tournament on Saturday.

Australia play Fiji at the indoor Sapporo Dome before France take on Argentina in a crunch clash in Pool C.

But the undoubted highlight comes in the day's last match when the All Blacks rumble into action against their fiercest rivals, a Springboks side which held them 16-16 when they last met in July.

While questions have been raised about All Blacks, now without their long-time world number one ranking, the Springboks are hotly tipped after a revival under coach Rassie Erasmus.

Ahead of their meeting in Yokohama, which many believe could be a preview of the November 2 final at the same venue, both sides will be keenly aware that no team has lost in the pool stages and gone on to lift the Webb Ellis Cup.

New Zealand captain Kieran Read was in no doubt about the importance of the game, which could go a long way to deciding whether the All Blacks win an unprecedented third straight title and fourth overall.

"South Africa in our opening game of the tournament is going to be one of the bigger games you play over your career," said the 122-Test veteran, who played in both the 2011 and 2015 World Cup finals.

South Africa, led by their first black World Cup captain, Siya Kolisi, will play in shirts bearing an image of Chester Williams, the only black member of the Springboks' 1995 World Cup-winning team who died this month at 49.

"From the opening match, the most important thing for us is clinching victory, the World Cup itself, so we're confident," Sports Minister Nathi Mthethwa told AFP.

"It means a lot. A win for South Africa here in Japan is a victory for the whole of the country, especially in the project of uniting our people."

Australia will also be posed serious questions when the 1991 and 1999 winners take on free-running Fiji in the unusual conditions of the Sapporo Dome, an indoor stadium in Japan's north.

Both teams will have to contend with the glare of the stadium's lights, especially under the high ball, while the dry surface should encourage an attacking game.

"The pitch is awesome, the stadium itself, hopefully I won't be catching any high balls," said Australia centre Samu Kerevi.

READ: Erasmus says All Blacks get better treatment from refs

France enter the tournament under the radar after a lean spell but the three-time finalists have shown encouraging signs since Fabien Galthie joined Jacques Brunel's backroom staff.

They also have a difficult start against Mario Ledesma's Pumas, the bulk of whom play for the Jaguares team that reached this year's Super Rugby final.

"We know the qualities of Argentina," said Brunel. "But we have prepared well and we're going to give it everything. The first game is key -- it sets the tone."

Saturday also saw tournament organisers issue their first weather warning, as a typhoon nears Japan. The storm should not directly impact any games but some fanzones were temporarily closed as a precaution.