All Blacks, Springboks roll the dice for World Cup prequel 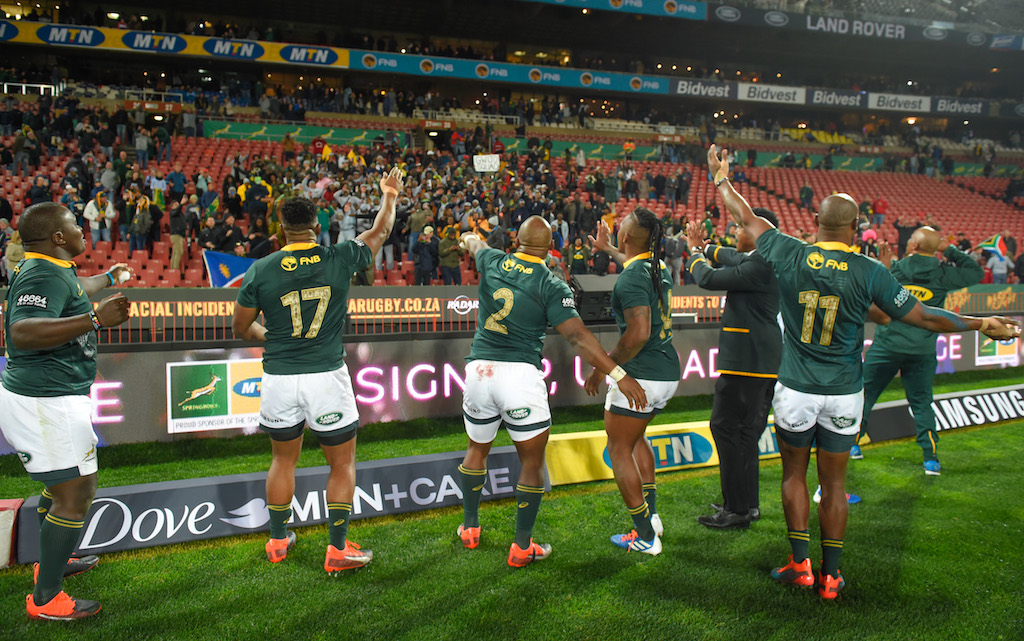 Springbok players celebrate with the fans during the 2019 Castle Lager Rugby Championship.

WELLINGTON - Managing risk while experimenting with selections, tactics and combinations has been the major theme in the build-up to Saturday's Rugby Championship blockbuster clash between South Africa and New Zealand.

Meetings between the two southern hemisphere superpowers are always highly anticipated, no more so than this year when they will also face off in the opening match of the Rugby World Cup in Japan in September.

With an eye on that tournament, All Blacks coach Steve Hansen and his Springboks counterpart Rassie Erasmus have both made wholesale changes to teams that produced victories in the opening round of fixtures last week.

READ: Erasmus to exercise flyhalf options against All Blacks

The All Blacks beat Argentina 20-16 in Buenos Aires, while the Springboks thrashed Australia 35-17 in Johannesburg and the Wellington clash will go a long way to deciding the winner of this year's truncated championship.

Several front-line players were rested by both teams last week, with a number of Super Rugby-winning Canterbury Crusaders not travelling to Argentina and a large advance party of Springboks arriving in New Zealand a week early.

Only three starters from each side will be on the field at kickoff on Saturday and while there are experimental designs to both backlines, the packs are arguably the strongest available.

Erasmus said he was keen to take a few risks, giving speedy openside flanker Kwagga Smith his second test start in the absence of injured captain Siya Kolisi, for example.

He also included among his replacements centre Frans Steyn, the 2007 World Cup winner who was brought back last week after two years in the international wilderness and who Erasmus views as potential flyhalf cover for Japan.

The last three matches between the sides have been decided by no more than two points and the Springboks ambushed the All Blacks last year at the same venue with an upset 36-34 victory.