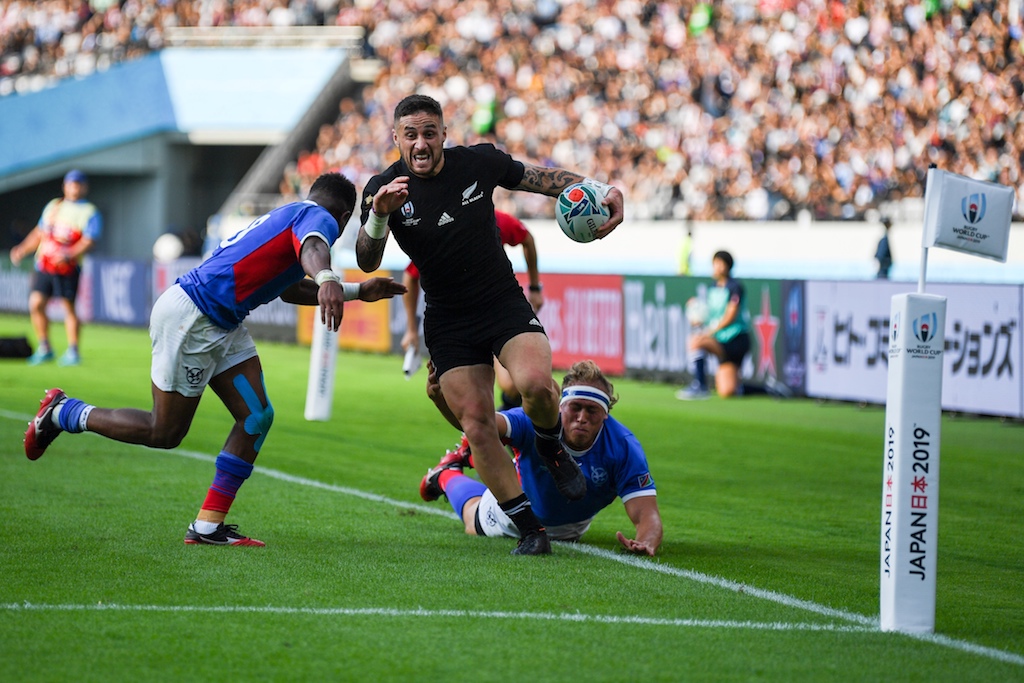 New Zealand's scrum-half TJ Perenara (C) runs to score a try during the Japan 2019 Rugby World Cup Pool B match between New Zealand and Namibia at the Tokyo Stadium in Tokyo on 6 October 2019.

TOKYO - An experimental New Zealand side recovered from a sticky start and two yellow cards to hammer Namibia 71-9 and move one step closer to finishing top of their pool at the Rugby World Cup on Sunday.

Namibia battled to within a point at 10-9 after half an hour before the two-time defending champions accelerated away to eclipse their 58-14 victory over the Welwitschias at the 2015 World Cup.

It put the All Blacks top of Pool B after three games, with one more to come against Italy next Saturday as the quarter-finals beckon. Second-placed South Africa round off their pool matches against Canada on Tuesday.

Namibia are the World Cup's undisputed whipping boys, after never winning a game in the competition and suffering embarrassing defeats like 142-0 against Australia in 2003.

The last time they beat a Tier One nation was Ireland in 1991, but they turned up to play at a cool, windswept Tokyo Stadium and were first on the board through a Damian Stevens penalty after two minutes.

New Zealand's Jordie Barrett, in his first start at fly-half, put in Sevu Reece with an assured cross-field kick just three minutes later, but then missed the conversion.

Anton Lienert-Brown stormed through a gap and fended off two defenders for New Zealand's second try on 20 minutes, but Barrett scuffed his conversion once again.

The All Blacks were finding it hard going against the physical Namibians, who twice worked their way upfield and won a pair of penalties which Stevens knocked over to take them to only 10-9 down after half-an-hour.

All Blacks prop Nepo Laulala was sent to the sin-bin for a high tackle on Stevens, and Brodie Retallick's comeback after a dislocated shoulder lasted just 30 minutes as there were uncomfortable moments for the world champions.

But Angus Ta'avao, minutes after coming on for Sam Cane, dived over for their third try and fullback Ben Smith added a fourth after the half-time gong to make it 24-9 at the break.

Joe Moody barrelled over just a minute after the restart before Barrett created a wonderful try, storming through a gap, exchanging passes with Jack Goodhue and putting Lienert-Brown over in the corner.

Reece grabbed his second try with a trademark injection of pace down the right flank, and captain Sam Whitelock added another as the score ballooned out to 52-9 after 56 minutes.

Barrett rediscovered his kicking boots in the second half, nailing eight conversions and capping a fine all-round performance with a late try as he finished with a personal haul of 21 points.

TJ Perenara was awarded the All Blacks' 11th and final try after a lengthy review, just before the gong.

The All Blacks extend their record World Cup winning streak to 17 matches dating back to the 2007 quarter-finals - while Namibia go to 22 straight defeats, the longest losing run in the tournament's history.