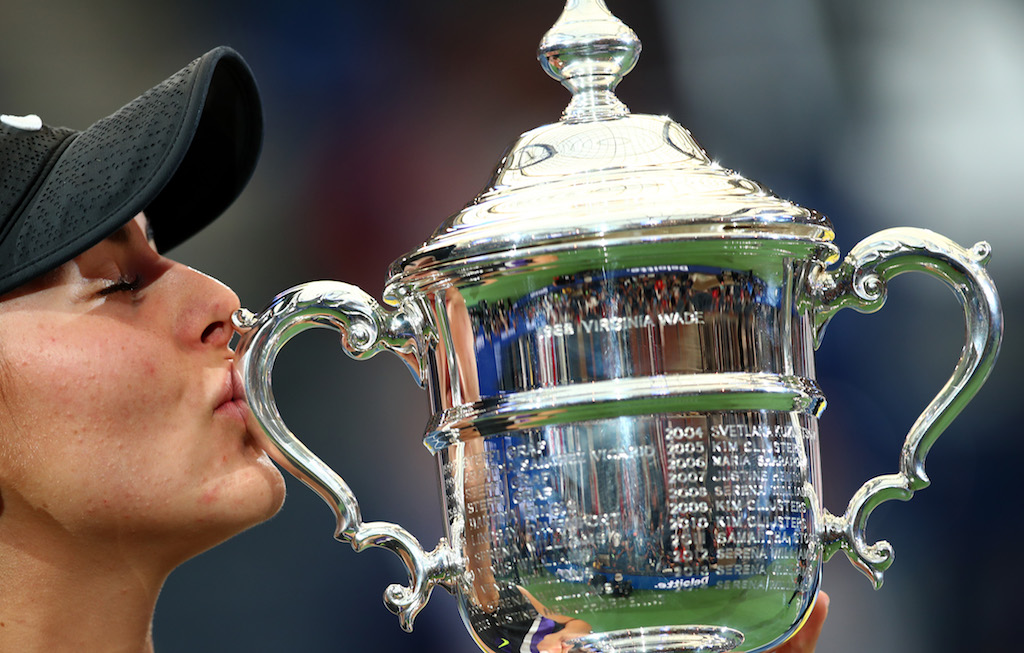 The 19-year-old Andreescu became the youngest Grand Slam winner since Svetlana Kuznetsova at the 2004 US Open, handing Williams a fourth consecutive defeat in the final of a major to again deny her a record-equaling 24th Slam title.

"It's so hard to explain in words but I'm just beyond grateful and truly blessed. I've worked really, really hard for this moment," said Andreescu, who had won just two Grand Slam matches ahead of her US Open main draw debut.

She improved her record over top-10 opponents this season to 8-0 and will rise to a career-high ranking of fifth on Monday.

"This year has been a dream come true. Being able to play on this stage against Serena, a true legend of the sport, is amazing.

"It wasn't easy at all. I tried to prepare my best like I do every match, I tried not to focus on who I'm playing. I'm really proud of how I dealt with everything."

Andreescu tied Monica Seles, who lifted the 1990 Roland Garros trophy in her fourth major, for the record as the fastest player to win her first Slam title in the Open era.

Williams, 37, suffered a second finals loss in a row at Flushing Meadows, after a 2018 defeat against Naomi Osaka best remembered for a furious tirade against chair umpire Carlos Ramos.

"Bianca played an unbelievable match, I am so proud and happy for you. It was incredible tennis out there. If anyone could win this, outside of Venus, I'm happy it's Bianca," Williams said.

Appearing in a 33rd Grand Slam final, and fourth since the last of her 23 major titles, Williams made an inauspicious start at Arthur Ashe Stadium by conceding her opening service game with successive double faults.

Andreescu, who wasn't even born when Williams won her maiden Slam at the 1999 US Open, responded with a comfortable hold, a pattern that repeated itself until the Canadian threatened to run away with the opening set.

Serving at 2-4, Williams erased five break points with a combination of aces and booming groundstrokes but Andreescu was knocking on the door once more as the American served to stay in the set.

A forehand winner earned the youngster a set point, and Williams duly her gifted her the opener with another double fault.

Andreescu had failed to even reach the main draw at Flushing Meadows the past two years, twice falling in the first qualifying round, and her confidence continued to flow as she surged 2-0 ahead in the second -- Williams again doubled-faulting on break point.

That prompted forlorn looks from the Williams box, where her close friend Meghan Markle, the Duchess of Sussex, was seated alongside sister Venus and fashion titan Anna Wintour.

The American carved out four opportunities to hit back the following game, benefiting from a huge stroke of luck when a forehand brushed the tape and trickled over to haul herself back on serve.

Undeterred, Andreescu promptly regained the initiative with another break and looked to be marching towards the title when she followed a routine hold by again breaking the Williams serve for a 5-1 lead.

Andreescu brought up championship point in the ensuing game, but Williams smacked a forehand winner to stay alive and then rattled off 14 of 17 points to peg her opponent back at 5-all.

"I was just fighting at that point, just trying to stay out there a little bit longer," said Williams, feeding off the energy of 24,000 cheering fans as she briefly sparked hopes of an incredible comeback.

The Canadian stemmed the bleeding by holding for 6-5 and an errant Williams backhand handed Andreescu two more shots at the title. Williams saved the first with an ace but Andreescu secured victory on the next with a blistering forehand return.