Another Springbok class of '95 hero lost 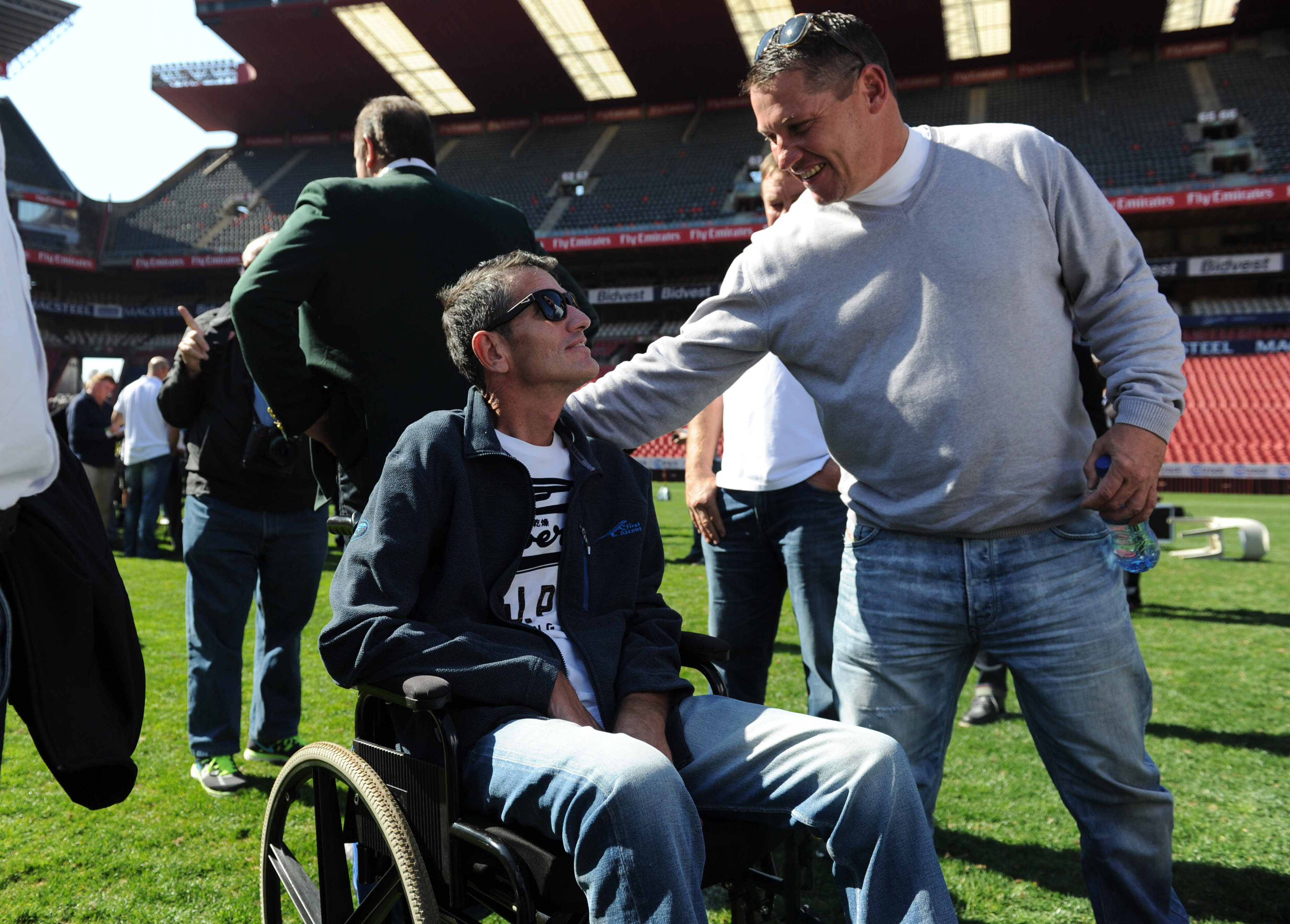 JOHANNESBURG - James Small is the fourth member of the iconic 1995 Rugby World Cup-winning Springbok camp that has passed away.

Springbok skipper Francois Pienaar held aloft the Webb Ellis Cup in the presence of the then SA president Nelson Mandela, who donned the green and gold Bok jersey, with the number 6 on the back, before a jubilant crowd of South African rugby fans. 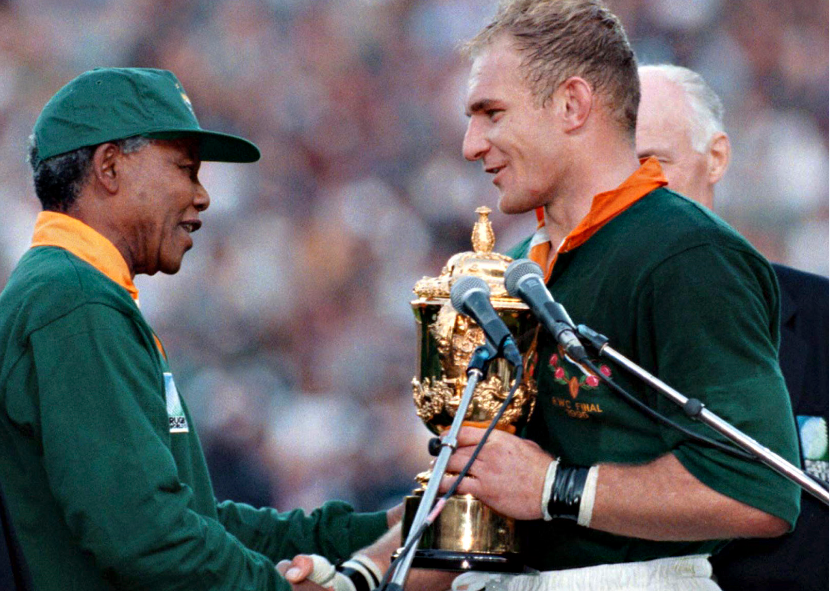 File: South African president Nelson Mandela, dressed in a No 6 Springbok jersey, congratulates the Springbok captain Francois Pienaar after South Africa beat the All Blacks by 15-12 to win the 1995 Rugby World Cup.

Small, a winger who played a pivotal role in keeping All Black star Jonah Lomu at bay during the final, died suddenly from a heart attack at the age of 50 last week.

The former Sharks (Natal) player made his debut for the Springboks against New Zealand in Johannesburg in 1992 and played in 47 Tests until 1997.

“James, as a member of the triumphant Rugby World Cup squad from 1995, will always have a special place in the hearts and minds of the South African public and we were devastated to hear of his passing,” said President of SA Rugby Mark Alexander.

“He always played with the type of passion and courage that encapsulate what Springbok rugby stands for, and he lived his life in the same way. 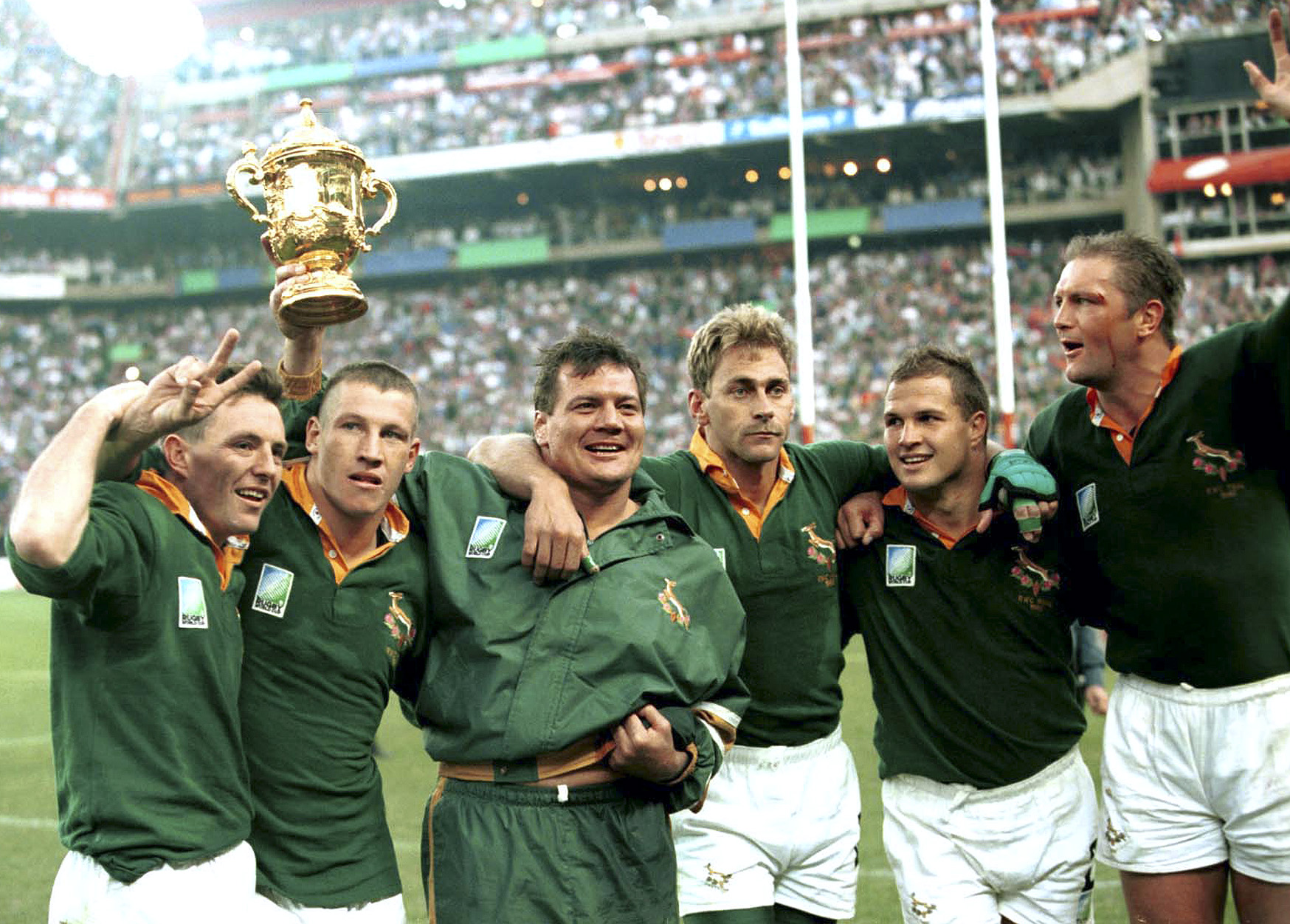 The former Springbok No.9 had battled with amyotrophic lateral sclerosis - the most severe form of the neurodegenerative illness called motor neuron disease (MND), for six years.

Many rugby commentators, writers, and experts consider Van der Westhuizen the greatest scrumhalf ever to play for the Springboks. 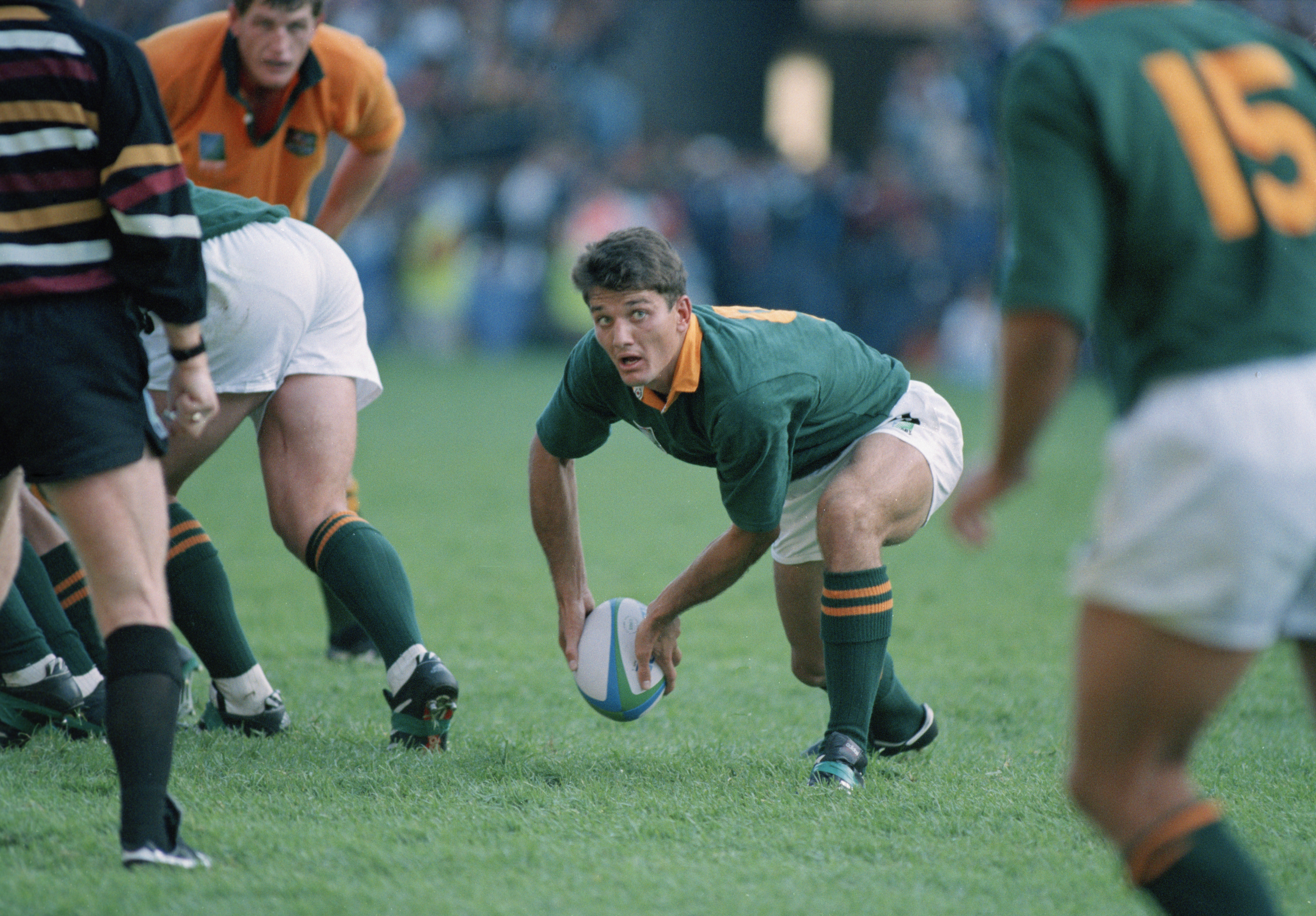 Characterised as ultra-competitive and tenacious as a scrum-half, Joost van der Westhuizen’s legendary rugby career will not soon be forgotten.

Standing at 1,85m tall, he without a doubt changed the scrumhalf position and made it his own in every way.

READ: Joost: The legacy of a champion

His ability to stay low to the ground and find gaps in opposition defences is unparalleled and he deserves being hailed as the best scrum-half in SA Rugby history.

Joost donned the green and gold 89 times for South Africa throughout his career and famously played a vital role in the Springboks 1995 World Cup win. 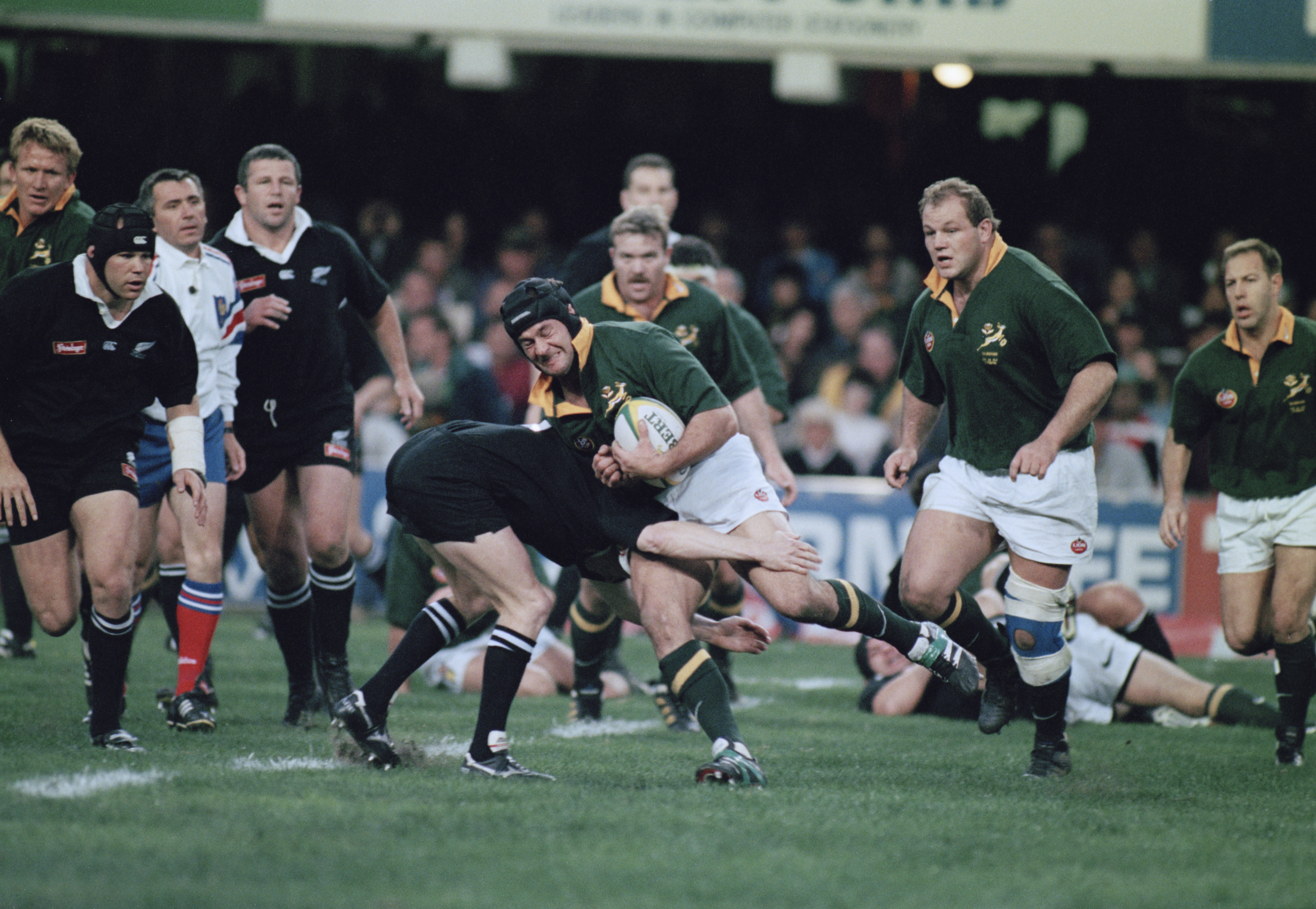 During the 1995 Rugby World Cup tournament, he made 5 starts and crossed the try line against France in the semi-final against  France in Durban.

Kruger also featured at the 1999 tournament.

The former Cheetahs and Blue Bulls player was named SA's player of the year in 1995.

Kruger died in January of  2010 after a long battle with cancer. 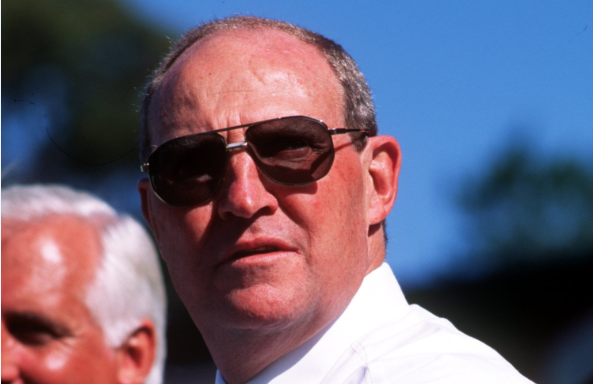 Kitch Christie, was a South African rugby union coach best known for coaching the country's national team, the Springboks, to victory at the 1995 Rugby World Cup.

Christie succumbed to cancer in 1998.

The 1995 Springbok team are still celebrated and admired to this day.

The Springboks won the World Cup again in 2007 under coach Jake White and captain John Smit. 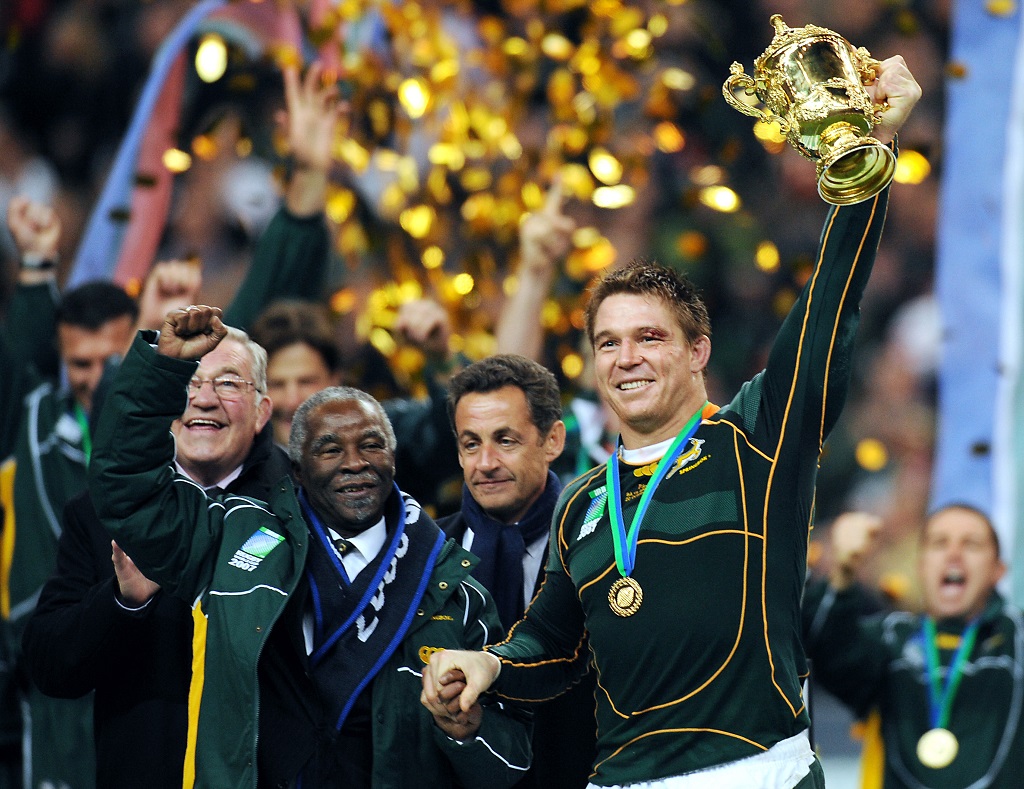 Then Springbok captain John Smit holds the William Webb Ellis trophy as he shakes hands with then South African president Thabo Mbeki after the World Cup final match England vs. South Africa, 20 October 2007 at the Stade de France in Paris. 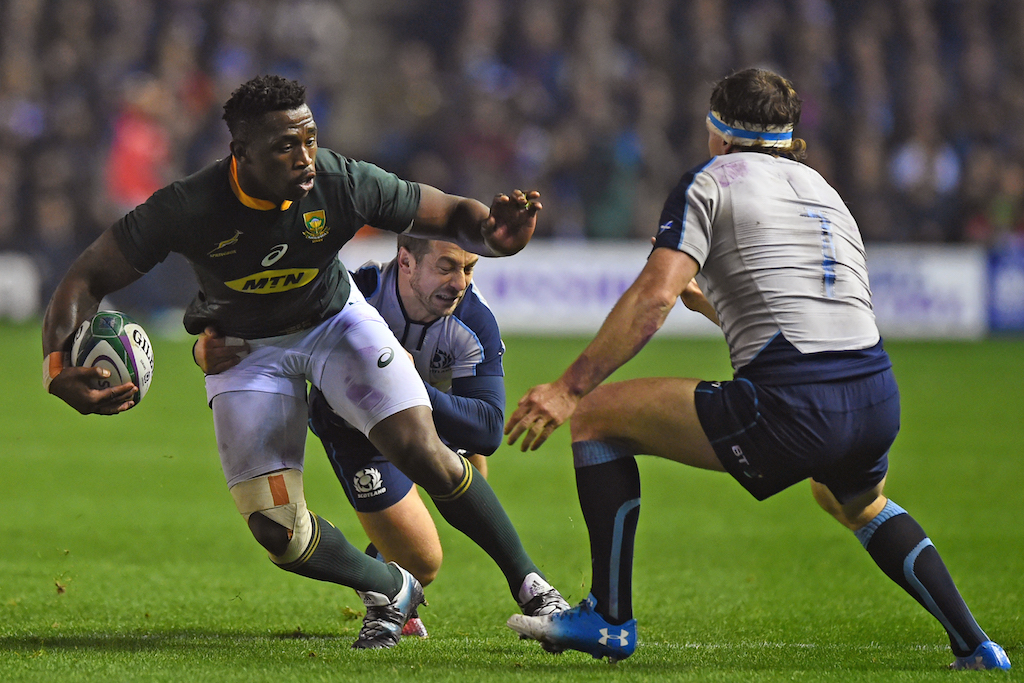 The new generation of Springboks will kick off their 2019 Rugby World Cup campaign against the All Blacks in Japan on Saturday, 21 September.