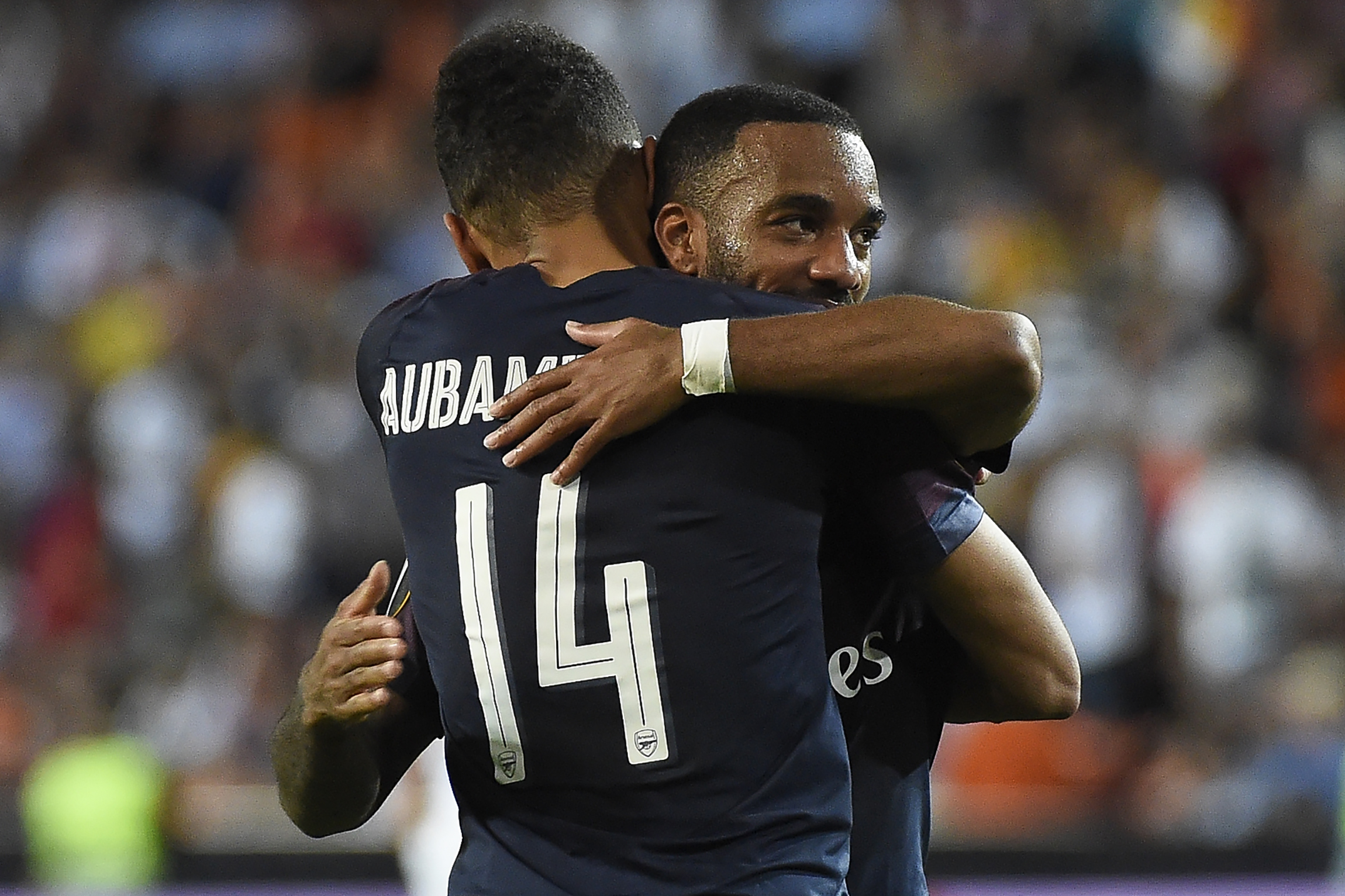 Arsenal's Gabonese striker Pierre-Emerick Aubameyang celebrates with Arsenal's French striker Alexandre Lacazette (back) at the end of the UEFA Europa League semi-final second leg football match between Valencia CF and Arsenal FC at the Mestalla stadium in Valencia on May 9, 2019.

SPAIN - Pierre-Emerick Aubameyang fired Arsenal into the Europa League final by scoring the hat-trick that ended Valencia's hopes of another dramatic European comeback on Thursday.

Trailing 3-1 from the first leg, Valencia made the perfect start at Mestalla when Kevin Gameiro finished at the back post but goals from Aubameyang and Alexandre Lacazette left the home side needing four in 40 minutes.

Gameiro scored again to spark hopes of a revival to trump even the efforts of Liverpool and Tottenham this week before Aubameyang hit his second and then completed a brilliant hat-trick to seal a 4-2 win, 7-3 on aggregate.

It keeps alive Arsenal's chance of securing a place in the Champions League next season and, realistically, their last chance, given they need to overturn three points and an eight-goal swing on Tottenham in the Premier League this weekend.

Standing in their way in Baku on May 29 will be London rivals Chelsea or Germany's Eintracht Frankfurt.

Valencia had been relying on the Europa League for Champions League qualification too, given they sit three points behind Getafe, who face a demoralised Barcelona on Sunday, with two games left in La Liga.

But over the two legs, Marcelino's side could have few complaints. They were second best at Emirates Stadium and defensively frantic here.

READ: Rampant Arsenal make it nine wins in a row

Arsenal, usually so fragile away from home, picked them off with ease as Aubameyang and Lacazette, boasting 48 goals between them this season, proved themselves to be a first-class attack in a second-tier competition.

"Auba was unbelievable tonight," Lacazaette told BT Sport. "We have played badly in the Premier League during the last month and now we have to use this opportunity. We want to play in the Champions League next season and we want the trophy."

Thursday's result means there will be no Spanish team in either European final for the first time since 2013, and only the second time in 10 years.

Valencia made a brilliant start as Jose Gaya headed wide at the near post and Goncalo Guedes fired over, with Petr Cech playing for time as early as the fifth minute in the hope of a chance for breath.

Instead, Arsenal conceded, caught upfield after Alex Maitland-Niles shot at Neto, who rolled out to launch the counter-attack. Rodrigo swept wide to Guedes and ran ahead of him, receiving and firing to the back post, where Gameiro slid in.

Valencia looked like they could score six let alone the one more required, only for Arsenal to find an equaliser against the run of play.

Cech punted downfield and Lacazette flicked on, with Aubameyang nipping in and, before his opponents could recover, driving into the bottom corner.

The rest of the half was high on intensity but low on quality as Valencia struggled to reboot. Aubameyang shot at Neto and Lacazette's whipped effort clipped the outside of the post.

Half-time should have been timely for the hosts but it was Arsenal that scored shortly after.

Dani Parejo's careless pass put them in trouble before Gaya was outmuscled. Lucas Torreira found Lacazette, who spun out of the clutches of Cristiano Piccini and buried the ball into the corner.

The tie looked done, Valencia needing four in 40 minutes, but they got one back eight minutes later, Gameiro diverting Rodrigo's shot in after Daniel Wass had cut back.

Valencia believed again but only briefly because Aubameyang struck again. Maitland-Niles ghosted past Guedes and crossed to the near post, where Aubameyang was too quick for Gabriel Paulista.

Some of Valencia's fans headed for the exits and even more followed when Aubameyang lashed another shot into the roof of the net for his third, and Arsenal's fourth.