Australia forge ahead against Sri Lanka in day-night Test 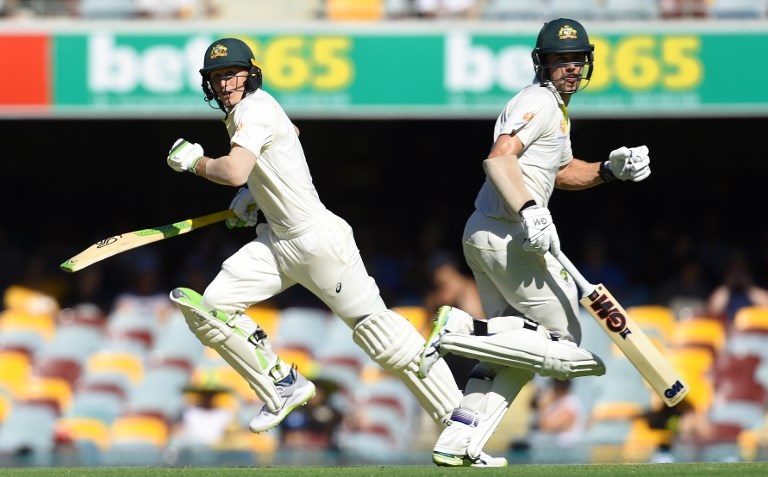 Australia's batsmen Marnus Labuschagne (L) and Travis Head (R) run between the wickets during the second day of the day-night Test cricket match between Australia and Sri Lanka.

BRISBANE, Australia - Australia forged ahead early on the second day of the day-night Test against Sri Lanka after losing a couple of wickets in the opening session at the Gabba on Friday.

Resuming at 72 for two chasing Sri Lanka's modest 144, the Australians reached tea at 159 for four with new vice-captain Travis Head on 29 and Marnus Labuschagne not out on 36.

Australia went to the interval leading by 15 runs and were expected to build on their advantage during the middle session before the evening session under lights.

Head and Labuschagne, who gave each other a high five as they headed off the ground for tea, had put on an unbroken 77 runs for the fifth wicket.

Marcus Harris was out in the first over of the day, spooning a cut shot to Lahiru Thirimanne at point off Lahiru Kumara for 44 after adding just four to his overnight score.

Nightwatchman Nathan Lyon was out three overs later for one, caught at second slip by Kusal Mendis off Suranga Lakmal, leaving the Australians at 82 for four in the 29th over.

Labuschagne survived a couple of strident leg before wicket appeals before he swept finger-spinner Dilruwan Perera to the boundary ropes to bring up the 50-run partnership with Head.

The Sri Lankans struggled to come to terms with the bouncy Gabba wicket after winning the toss on Thursday's opening day with only wicketkeeper Niroshan Dickwella showing any resistance hitting 64 from 78 balls.

Test debutant Jhye Richardson, who only came into the side after Josh Hazlewood was ruled out with injury, had figures of 3-26 to lead an impressive Australian display with the ball.

Pat Cummins chimed in to clean up the tail, finishing with 4-39.