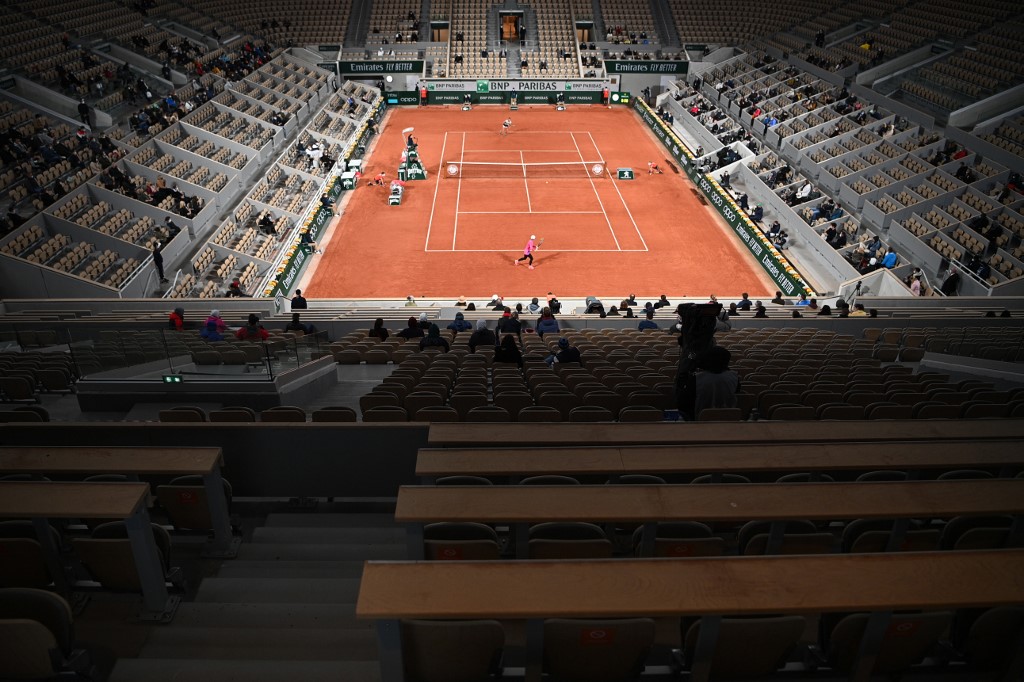 General view of the few spectators sit on the empty stands of the Philippe Chatrier court.

PARIS - Former world number one Victoria Azarenka believes the biting cold and steady rain at Roland Garros could cause serious injury after being forced to "sit like a duck" in weather conditions she blasted as "ridiculous" in her French Open first-round tie.

The 31-year-old 10th seed eased past Danka Kovinic, the world number 74 from Montenegro, 6-1, 6-2 in just over an hour in a tie played out on an almost crowd-free Court Suzanne Lenglen due to coronavirus restrictions.

The US Open runner-up had been unhappy when rain fell steadily in the first set, adding to the misery of playing in 10 degrees Celsius weather.

"This is getting a little ridiculous. It's eight degrees. I'm not waiting," said Azarenka, refusing to hang around courtside "sitting like ducks" as the supervisor came out to inspect conditions.

"It's too cold. I live in Florida, I'm used to hot weather."

After just 15 minutes, play was suspended.

However, the Belarusian regained her composure when the match resumed even if she did complete it wearing black leggings and a tracksuit top.

She will face 40-year-old Venus Williams or Anna Karolina Schmiedlova for a place in the last 32.

"I am glad to get it finished so I can watch the others struggle in this weather and rain," said Azarenka.

Later, she told reporters that she agreed with 12-time champion Rafael Nadal's belief that the chilly conditions of playing in the autumn, rather than the tournament's traditional May-June slot, as well as the heavier balls, brought fresh challenges.

"Does it increase the risk of players getting injured? Absolutely, I think that it does. But what's going to happen, I don't know. I don't really want to think about it," she said.

"I think after the tournament there should be some real good feedback and explanations and conversations with players, that's for a fact."

Despite her frustrations, Azarenka believes it was the right decision to go-ahead with the French Open four months later than planned in an eerie atmosphere not helped by a daily limit of just 1,000 fans on the site.

"I think it's a complicated question, it really is. I don't know if I've never really played in September in Paris. I've been here in October and I knew that it wasn't the best conditions to play tennis," she said.

"I think that the unfortunate part sometimes with the French Open is that there is no communications with players or the player council, so you kind of just make decision without consulting.

"Do I think it's better that the tournament is cancelled? I wouldn't particularly say so because I do believe that I want to play.

"Also I think lower-ranked players and doubles players have been hit pretty hard financially with the situation, so it's definitely a great opportunity to be able to have the tournament."