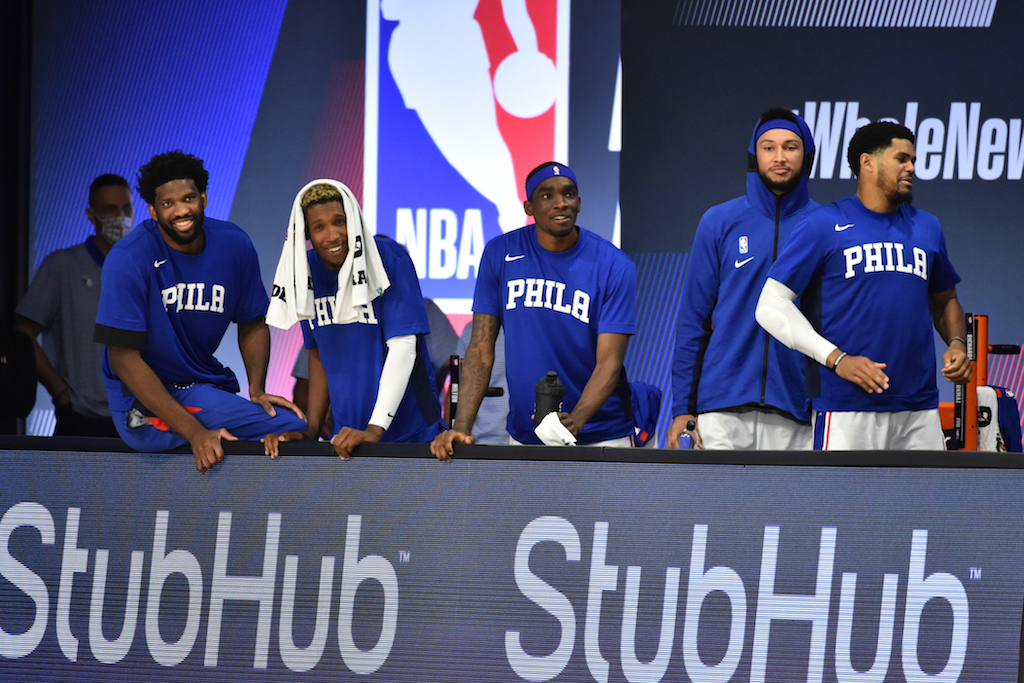 The Philadelphia 76ers react during a scrimmage against the Dallas Mavericks on July 28, 2020 at HP Field House at ESPN Wide World of Sports in Orlando, Florida.

UNITED STATES - Four months after COVID-19 sent basketball into an unprecedented shutdown, the NBA takes a leap into the unknown on Thursday as the league bids to resurrect its season at Disney World in Florida.

The Utah Jazz launch the rebooted campaign against the New Orleans Pelicans before LeBron James and Kawhi Leonard go head-to-head in a heavyweight Los Angeles derby between the Lakers and the Clippers.

The two games mark the start of a painstakingly crafted plan to stage the remainder of the basketball season safely in the midst of an ongoing pandemic which has already claimed around 150,000 lives in the United States.

To mitigate the risks, the NBA is basing 22 teams within a tightly controlled "bubble" inside Disney World's sprawling 40-square mile campus in Orlando.

READ: NBA to return as board approves return-to-play plan

Teams will play games at three venues inside the ESPN World Wide of Sports complex inside the park, with no fans in attendance and only a smattering of journalists at each game.

Just over 350 players will be housed at three hotels located throughout Disney World, with access to each location severely restricted and visits from outsiders strictly forbidden until the playoffs start.

Players arriving in Orlando were required to spend 48 hours isolated in their hotel rooms until they had received two negative tests for COVID-19.

Testing will continue inside the bubble but it is not known how frequently this will take place.

While multi-millionaire stars such as the Lakers' James have joked that entering the bubble felt like starting a jail term, so far the launch of the project has gone smoothly.

Practice games have passed off without a hitch, and the most recent round of testing found zero positive cases out of 346 players tested.

"From my standpoint, it's going very well, and I'm cautiously optimistic that we’re on the right track," Silver added.

READ: NBA shut down, fans shut out as coronavirus hits US sport

"But I also recognize what we're doing has not been done before, and the competition is just beginning. The real test will come when players are commingling, playing basketball without masks and without physical distancing."

There have been some early glitches however as players adjust to the relatively spartan surroundings of the bubble.

Los Angeles Clippers guard Lou Williams was forced to quarantine for 10 days after being photographed at an Atlanta strip club during a trip to attend a family funeral.

The Sacramento Kings' Richaun Holmes also landed back in quarantine after he left the bubble to pick-up a delivery of take-out food.

Inside the bubble's three arenas, meanwhile, the legacy of the tumultuous protests which erupted in the weeks following the death of George Floyd in May will be on full view.

Giant "Black Lives Matter" slogans have been written on each court, while players will be allowed to wear jerseys adorned with social justice messages ranging from "I Can't Breathe" to "Justice Now" and "Education Reform."

On the courts, all eyes will be on James and his Lakers teammates as they attempt to return to the pinnacle of the NBA when the season wraps in October.

After a disappointing first season in Los Angeles, where the Lakers failed to reach the playoffs, James returned with a vengeance this season, leading the team to the top of the Western Conference before the COVID-19 pandemic erupted.

The Lakers and five other Western Conference teams -- the Clippers, the Denver Nuggets, Utah Jazz, Oklahoma City Thunder and Houston Rockets have already assured themselves of spots in the playoffs, which start on August 17.

The biggest threat to James' hopes of winning a fourth NBA championship is expected to come from the Eastern Conference, where Giannis Antetokounmpo is aiming to guide the Milwaukee Bucks to their first title in nearly half a century. The Bucks had ran away with the Eastern Conference before the hiatus, opening up a 6.5 game lead over the Toronto Raptors.

Antetokounmpo, who grew up in poverty in Greece as the son of Nigerian immigrants, smiles at the suggestion NBA players are facing hardship in their confined environment in Orlando.

"My apartment in Greece, when I was younger, with my four brothers, was way smaller than the suite that I have in the hotel, so I'm just trying to enjoy the moment."

"Let's be clear mate," the New Zealander said. "This is not Syria. We're living in a bloody resort."